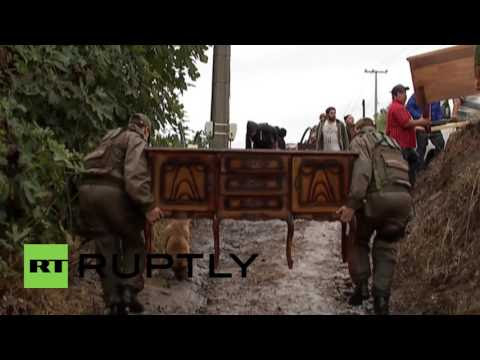 A major storm has ravaged parts of the US in the period between April 15 and 17, 2016. Heavy snowfall and flash floods wreaked havoc across the affected areas, causing large traffic disruptions, power outages and evacuations.
More than 0.3 m (1 feet) of snowfall was reported across high areas of Colorado, and lower levels at Denver International Airport over the last couple of days. A total of 128.5 cm (50.6 inches) was measured near Pinecliffe.
17.8 cm (7 inches) of snow was reported at the National Weather Service (NWS) Office in Bellmont, Arizona on April 18 while 128.5 cm (50.6 inches) was measured near Pinecliffe, 116.8 cm (46 inches) near St. Mary's Glacier, and 30.7 cm (12.1 inches) at Denver Int'l Airport in Colorado.

Video credit: NBC News
(48.3 cm) 19 inches was observed west of Bynum, 17.5 cm (6.9 inches) at Great Falls in Montana while 29.2 cm (11.5 inches) blanketed area near Questa in New Mexico, and (15.2 cm) 6 inches was reported at Kenmare in North Dakota. At the same time, 17.8 cm (7 inches) was recorded at Buckboard Flat in Utah, 83.8 cm (33 inches) near Encampment and 38.1 cm (15 inches) near Casper in Wyoming.
Parts of Interstate 80 in southeast Wyoming were closed on the morning of April 17, and severe weather conditions caused the Interstate 70 to the west of Denver to shut down from April 15 to 17. At least 47 000 homes reported power loss while the storm swept Colorado. Northern Arizona also reported heavy snowfall on the morning of April 16 (local time).
Heavy rainfall triggered major flash floods in the Houston area in the early hours of April 18 (local time), as about 25.4 cm (10 inches)  fell in only six hours and inundated the region. Jeff Lindner, a meteorologist with the Harris County Flood Control District warned of a "life-threatening" situation in northwest Harris County. Additional amount between 30.5 and 40.6 cm (12 and 16 inches) of precipitation has been expected in the region before the daybreak.

Video credit: NBC News
A daily rainfall record was broken at the Houston's Bush Intercontinental Airport, as 22.5 cm (8.85 inches) was recorded by 5:20 am (local time), the NWS reported. All incoming and outgoing flight traffic was canceled.
"This is a dangerous situation and I do not want our employees trying to get to work. Do not go out until conditions improve," Houston Mayor Sylvester Turner said. He closed all city buildings and canceled the State of the City address set for Monday. The Houston Independent School District was also closed on April 18.

Water 10 to 15 feet deep: 'Historic!' Official claims waters recorded in one area were 40ft (12 metres) higher than the previous record. 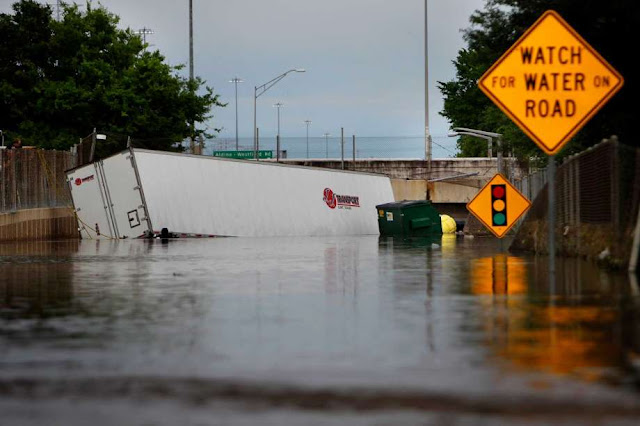 Photo www.chron.com
One Houston flood official said waters recorded in one area were 40ft (12 metres) higher than the previous record.
At least five people dead across the state.
Meteorologists said some 17.6in (44.7cm) of rain fell on Houston on Monday alone, levels national officials said were "historic".
Houston 110,000 homes were left without power
The governor of Texas has declared a state of emergency in nine counties after widespread, deadly flooding hit Monday morning.
Rainfall came down at rates as high as four inches an hour, flooding waterways at rapid rates and leaving residents trapped in their own homes and vehicles.
At least five people have been confirmed dead.
According to the Houston Chronicle, Harris County Judge Ed Emmett confirmed four dead in the county.
Waller County officials say one person was killed there.
The Houston Police Department is also investigating possible deaths, but has not released details on how many.
The number of people killed was expected to rise as first responders assessed the situation.
In Harris County alone, more than 1,000 homes were flooded, according to Judge Ed Emmett.
Harris County officials reported nearly 900 water rescues in the city of Houston alone and 1,222 total early Monday afternoon.
"When you get off the freeways and off the main thoroughfares, you could be in water 10 to 15 feet deep," Fire Department spokesman Jay Evans told the Associated Press.
"You do not want to trap yourself in these vehicles."
Near Brookshire, Texas, citizens rescued semi truck driver Ron Bumpus from his rig after he drove into floodwaters.
During a tense live broadcast on The Weather Channel, truck driver Daniel Sieczkarski swam out to the vehicle, which was submerged up to the door handles, with a rope.
Several other citizens hauled Sieczkarski and Bumpus back through the swiftly flowing water. Rainfall totals of 10 to 20 inches have been measured in southeast Texas to the northwest of Houston as of 6:30 a.m. CDT, according to the Harris County Flood Control District.