OUT OF MIND » THE INSANITY OF REALITY » GLOBAL FINANCIAL COLLAPSE » Revolt Of The Debt Slaves: When The Herd Turns

Revolt Of The Debt Slaves: When The Herd Turns

If we could just get consumers to borrow more, so that they spend money they don’t have on things they don’t need, in order to boost GDP and corporate profits, all would be fine.
That’s the current meme among [keynesian] economists.

Since 68.5% of US GDP is related to personal consumption expenditures, boosting consumer spending is seen as crucial. Since wages at the lower 75% are crummy and have not been rising enough to keep up with inflation, the only other way to prod consumers into spending more is to bamboozle them into borrowing more and blowing this moolah instantly.
Cutting interest rates to zero was supposed to have helped that noble process (though consumers see those zero-rates inexplicably only on their savings and not on their debts).
So that process of growing GDP by loading up consumers with debt, which worked for decades, has stalled:

Clearly, this strategy has bumped into some limits. And what is left over is debt weighing on people’s shoulders.

A lot of debt, for a lot of people: 61% of Americans say they carry at least some debt, according to a new report by Gallup that shows to just what extent carrying debt impacts consumer behavior and drags down consumer spending. As Gallup put it, “not buying things is bad for the economy.” But that’s exactly what a large portion of debt-carrying consumers are forced to do.
Consumer behavior is even more strongly impacted by the scourge of the American economy, “not having enough money to live comfortably,” as the survey found, which surprises no one. But consumers that carry debt – even people “who have enough money to live comfortably” – play a large role in the current economic quagmire.
These folks are “significantly more likely” to engage in a variety of cost cutting actions than those who’re debt-free. The most important cost-cutting actions?

So who are these forced cost cutters? Millennials and Gen-Xers, according to Gallup (Part 2 of the report). The survey asked whether they have engaged in 10 debt-related behaviors. Here are the top two by generation:

But GDP must be pumped up.
So even the 35% of Americans who say they “do not have enough money to live comfortably” are trying to fill in the holes with debt. As a group, they carry 36% higher credit card balances – one of the most expensive forms of debt – than those who say they have enough money to live comfortably. Gallup in a separate report:

They also carry more auto loan debt and personal loan debt.
In short:
Millennials are the only generation where those who say that they don’t have enough money to live comfortably carry 8% more total consumer debt than those who say they do have enough money.
Having come of age in the era of the Fed’s zero-interest-rate schemes, these out-of-luck millennials are supplementing their income by borrowing more than their out-of-luck peers of any other generation, and in the most expensive manner.
But running up credit card balances or taking out personal loans to buy consumer items are acts that borrow from the future in order to consume in the present. That debt will have to be serviced in the future, with money that otherwise would be spent on consumption. And that “future” is now.

Because millennials are young and at the beginning of their careers and earning power, they are mortgaging more than the future by carrying debt: They are also mortgaging the present.
Millennials are putting off getting married, having children, furthering their education, and establishing their independence (by moving in with relatives) more than any other generation. This problem compounds if they have the added burden of student loan debt. Millennials’ total consumer debt load is $29,000 — but if that balance includes student loans, the total rises to over $40,000.
Consumer debt is a double-edged sword. On the one hand, it fuels the economy by giving consumers added purchasing power. On the other, it is a burden that limits individuals’ choices in the future, such as buying a home or a car. And for those with student loans, it can become a crushing burden.

That burden of debt that was incurred in the past to boost GDP is now weighing on consumer spending and on GDP. It explains in part why consumer spending is languishing, despite a growing US population – by 16 million since the Financial Crisis – and despite historically low interest rates that were designed to lure everyone into becoming debt slaves. And this too is the price to be paid today and going forward for the policies the Fed imposed on the US in 2008.
The impact is everywhere. Total business sales in the US have dropped to 2012 levels. Inventories have ballooned to crisis proportions. And as companies begin to respond by cutting costs, jobs will be next. Read… Why This Economy Is Now Running Aground
Business Insider

WHEN THE HERD TURNS

Once market participants realize the top is in and the only possible result from here on is a loss, the herd will turn and follow the leaders who are selling. A funny thing happens when the stock market herd turns–all the usual central bank tricks no longer push the markets higher.

If market participants believe the top is in and markets will decline, they will sell, i.e. liquidate positions rather than build them. This is called distribution, as the smart money distributes stocks to the greater fools who have yet to get the memo that the top is in and from now on, stocks will only lose value.
What causes the herd to turn? The process is not entirely mechanical or predictable. Those in the front of the herd tend to lead those following, and so we look to the leading stocks, sectors and players for clues as to what the herd will do.
When the leaders of the stock rally dwindle to a few names, that is evidence that the herd is losing its momentum and confidence.
When those leaders no longer make new highs but instead notch lower highs despite good news, that is further evidence that the herd’s direction is becoming increasingly uncertain.
When the herd’s leading edge veers first one way and then the other, this lack of coherence is also evidence that the herd’s leaders are no longer confident in which direction to take.
The herd is all about following the pack in front. The animals just behind the leaders have no way to know what the animals in the rear of the herd are doing; they only know what the leaders are doing, and the herd instinct is to not leave the safety of numbers.
So when the leaders turn, the herd follows. The leaders might sense danger ahead, or see obstacles to avoid. Which way to go? A handful of those in the front decide for all those behind, and that decision is ultimately based on avoiding risk.
Once the herd has turned, all attempts to reverse the change in direction fail as the momentum cannot be stopped.
When the leaders realize that further market gains are increasingly unlikely and fraught with risk, they will exit. The herd following them will also exit, as the selling of the leaders will eventually push markets down despite central bank purchases.
To the leaders who are selling, central banks are simply large-scale chumps, snapping up shares right when those buying stocks are about to stampede over the cliff. Central banks buying equities give sellers more opportunities to distribute to greater fools; they can’t change the direction of the herd. 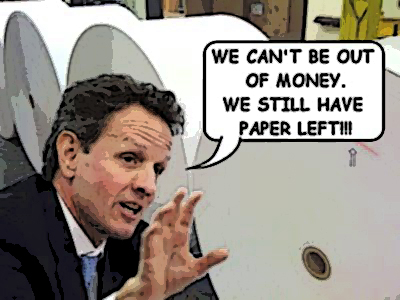 Timothy Geithner Tax Dodger
The ultimate hubris of central banks was their supreme belief in their own powers to direct the herd. As long as the herd was stampeding in one direction, the central banks could imagine that their shouted orders were directing the herd.
But once the herd turns, the futility of those orders will be revealed.
Once market participants realize the top is in and the only possible result from here on is a loss, the herd will turn and follow the leaders who are selling.
Max Keiser 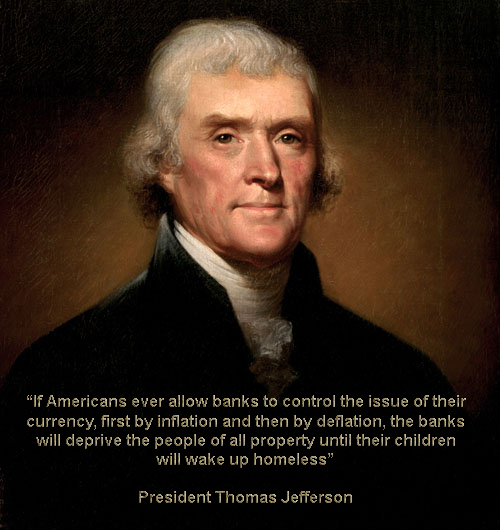 OUT OF MIND » THE INSANITY OF REALITY » GLOBAL FINANCIAL COLLAPSE » Revolt Of The Debt Slaves: When The Herd Turns