OUT OF MIND » CHANGING ENVIRONMENT & NATURE » NEW TECH FOR A HEALTHY PLANET » This Desk-Size Turbine Produces Electricity from Carbon Dioxide and Can Power 10,000 Homes!

This Desk-Size Turbine Produces Electricity from Carbon Dioxide and Can Power 10,000 Homes!

General Electric (GE) Global Research has just announced the development of a prototype turbine which converts carbon dioxide into electricity. While the size of the turbine does not exceed that of a desk, the inventors say it could actually power a town of 10,000 homes!
This sounds really promising, given that this innovation has the potential to help solve two critical issues of the modern world – CO2 pollution and energy crisis – at the same time.
As Doug Hofer, GE steam turbine specialist who is leading the development of the carbon dioxide turbine technology, said in a press release, “the world is seeking cleaner and more efficient ways to generate power. The concepts we are exploring with this machine are helping us address both.” 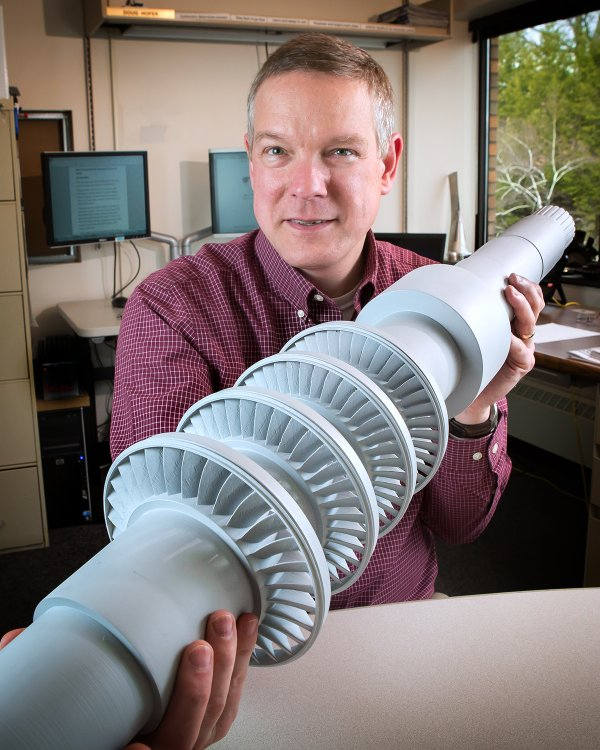 Doug Hofer demonstrates a 3D-printed model of the carbon dioxide turbine.
Unlike conventional turbines which convert the thermal energy of pressurized steam into mechanical energy, GE’s turbine uses CO2 in the form of a supercritical fluid to operate. This state is what gives the turbine some truly remarkable properties. A supercritical fluid is basically an intermediate state between a gas and a liquid, which is reached thanks to the incredibly high temperatures and/or pressures at which the substance is maintained. Thus, supercritical fluids can both move through solid matter like gases and dissolve materials like liquids.
According to GE, these exceptional properties of supercritical fluids significantly increase the efficiency of their prototype turbine in comparison with steam turbines, along with the advantage in compactness (steam turbines are normally about 10 times bigger). Moreover, carbon dioxide is capable of absorbing, storing and releasing heat much quicker than water, which further increases the turbine’s energy efficiency.
Let’s take a closer look at how the carbon dioxide turbine works. First, heat from the sunlight is harvested in the form of molten salt, which is then used to superheat dry ice and extract the CO2 it contains. As a result of this process, CO2 becomes a supercritical fluid and can be utilized to power the turbine, which in turn, can produce enough electricity for 10,000 homes.
Advertisements
Thus, it’s a great way to utilize the harmful CO2 which otherwise would be released into the atmosphere and wasted. According to GE specialists, the turbine could enhance the energy efficiency of solar energy farms and traditional gas turbine stations. They have estimated that if the carbon dioxide turbine technology is integrated into a CSP plant, up to 68% of the stored energy could be transferred back to the grid. And most importantly, this technology would provide a greener energy solution and help solve the environmental problems that plague our planet.
Hofer told Mail Online: “With energy demand expected to rise by 50 percent over the next two decades, we can’t afford to wait for new, cleaner energy solutions to power the planet. We have to innovate now and make energy generation as efficient as possible.”
Image credit: GE Global Research

OUT OF MIND » CHANGING ENVIRONMENT & NATURE » NEW TECH FOR A HEALTHY PLANET » This Desk-Size Turbine Produces Electricity from Carbon Dioxide and Can Power 10,000 Homes!

» UN Climate Scientist: 'Carbon Dioxide Emissions Are Making The Earth Greener And More Fertile'
» Cambridge Researchers Produce Clean Fuel From Sunlight, Carbon Dioxide And Water
» Elon Musk tweets that SpaceX will start program to pull carbon dioxide in atmosphere and use it as rocket fuel
» For The Cost Of An iPhone, You Can Now Buy A Wind Turbine That Can Power An Entire House For Lifetime
» These Carbon-Neutral Bioceramic Geodesic Dome Homes Last 500 Years And Don’t Rot, Burn, Or Rust