OUT OF MIND » THE INSANITY OF REALITY » POISON PLANET » Seattle to Be Sprayed With GMO Bacteria, Agency Warns “Stay Inside After the Spray”

Seattle to Be Sprayed With GMO Bacteria, Agency Warns “Stay Inside After the Spray” 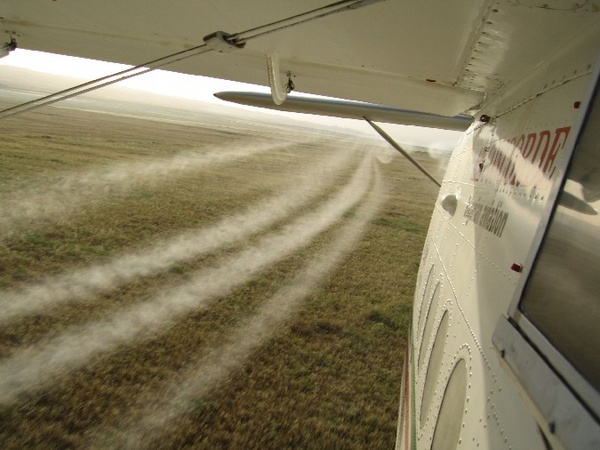 U.S. Army photo.
What’s that being sprayed in the skies?
Residents living in Western Washington are about to be doused with a bacteria called Bacillus thuringiensis (Bt), as a government agency attempts to control gypsy moths who plague agriculture in the area.
It has many people alarmed at the use of the genetically modified pesticide in the area where they live and breathe.
KOMO News in Seattle reports:

A controversial pesticide program will be underway Saturday in Pierce County.
“Once [the troubling gypsy moth] become established it becomes very difficult to do anything that slows it down,” said Hector Castro, spokesperson for the Washington State Department of Agriculture. “We don’t want it to become established at all in Washington State.”
[…] Saturday the state will start spraying seven areas in Western Washington with a pesticide called Bacillus thuringiensis kurstaki or Btk.

As Your News Wire points out, this insecticide has been genetically engineered by leading biotech firms specifically for use on GMO crops:

The program, opposed by many residents, will spray a bacteria with pesticide properties called Bacillus thuringiensis (Bt), the same bacteria gene commonly used in GM crops to kill insects.

Now, residents across Washington state are part of an unannounced experiment where they are being sprayed with a pesticide that can admittedly accumulate in the body, and has been found in tissue samples of people throughout North America. Though the exposure level is said to be low, it doesn’t mean that there is no effect.
The state authorities claim that the pesticide is safe for the general population, yet conversely admit that it could affect people with health problems:

Lauren Jenks with the Washington State Department of Health… says people who could be impacted by the spraying are those with respiratory issues.
“We recommend they try to minimize their exposure to the Btk by staying inside for up to a half hour after the spray,” said Jenks.

However, the USDA and other organizations claim that the acidic diet of most Americans renders the bacteria harmless, though it is persistent in produce and food products. It is widely used on crops, and is even used on organic crops.
Nevertheless, in countless cases, agencies throughout the government have proven far too willing to accept ‘minimal risk’ in favor of policies for the great good, even if it means a negative health impact on the community.
In the past, the government has tested bacteriological agents over American and British cities, including San Francisco.
The tests, conducted in secret, have now been declassified, but their negative impact has been minimized.


What happens when they decide to treat us all like bugs?

OUT OF MIND » THE INSANITY OF REALITY » POISON PLANET » Seattle to Be Sprayed With GMO Bacteria, Agency Warns “Stay Inside After the Spray”

» The spray The spray COAL ASH
» Photographer delves inside rabbit hole — and what he finds inside was amazing
» *Chemtrail All Seeing Eye Sprayed In Sky For All To View!*
»  It’s Official: Sky Will Be Sprayed in Geoengineering “Experiment,” Blocking Sun for Climate Change
» The Sky Is Going To Be Sprayed With Toxic Particles In A Geoengineering Experiment, Blocking The Sunlight