Posted on April 25, 2016 by https://dublinsmick.wordpress.com


There have been some things that recently caught my attention. Yellowstone National Park is once again experiencing some rather unusual happenings. A mound is rising with cracks in it. Also there was a 6.9 earthquake near Barbados the USGS seems to have missed on their recorders.
Why is this important? Well if you follow Cayce he predicts that the Eruption of Pelee on Martinique signals rapid earth change with portions of Nevada and Utah undergoing destruction within 3 months.
The under sea area around Barbados and the Island of Martinique is heavily dotted with volcanoes.


LINK –   https://youtu.be/OvFD_6ijnS0
YELLOWSTONE: ATTEMPT 2 FIND SOMEONE TO ASK QUESTIONS (VIDEO) https://www.youtube.com/watch?v=Ct7lyMxJqfI
BIG SCOOP:
EXCLUSIVE CALLS 2: YELLOWSTONE IN AN ATTEMPT 2 GET ANSWERS, UTAH SEISMOLOGIST, FEMA (VIDEO) https://youtu.be/UFcxDhrm89g
Carol calls up and get the whole story behind the famous ‘red dots’ map in the Superstation95 news story! She might call up and get more tomorrow. Stay tuned!

NOTE: We posted, as comments, some news about the
red sky in El Salvador event (we doubt it is farmers burning sugar cane)
at this post: BREAKING: USGS WARNING to ALL in UTAH!
and we just added to it. For now, that will be the place to look for more on the topic.

Unbelievable Underwater Photos Of Atlantis Off Cuba, Pyramids Are 3 Times The Size of Cheops, Cayce Was Right! There Was A Polar Shift

Massive Explosive Potential in Louisiana and Gulf of Mexico By Freedomrox

(Original Content) Massive Explosive Potential in Louisiana and Gulf of Mexico. Doomsday?
This is a well written article by Freedomrox, it provides more answers to some of the problems we have been discussing.

Mother Of All Sinkholes Could Produce Blast Of 100 Hiroshimas, Chaos As Far As Houston, 1.5 Million Barrels Of Butane, Awakening New Madrid Theory, Waterford and River Bend Plants Are In Area

Mount Vesuvius has had some small nearby earthquakes this month. It is a strato volcano, one of the world’s largest and has not erupted since 1944.

The history of Mount Vesuvius

Mount Vesuvius is best known for its eruption in AD 79 that led to the burying and destruction of the Roman cities of Pompeii, Herculaneum, and several other settlements. That eruption ejected a cloud of stones, ash, and fumes to a height of 33 km (20.5 mi), spewing molten rock and pulverized pumice at the rate of 1.5 million tons per second, ultimately releasing a hundred thousand times the thermal energy released by the Hiroshima bombing.[1] An estimated 16,000 people died due to hydrothermal pyroclastic flows.[2] The only surviving eyewitness account of the event consists of two letters by Pliny the Younger to the historian Tacitus.[3] 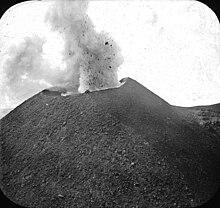 Hercolubus: The Greatest Mystery Of The Modern Era