PRINCE: American Celebrities Are Never Allowed To Leave The Reservation—NEVER!

PRINCE: American Celebrities Are Never Allowed To Leave The Reservation—NEVER! Mon Apr 25, 2016 9:44 am

Death of a Prince: The ‘Agency System’ Back Story That Has Never Been Told

Prince and the REVOLUTION:  His First Band

He was a one-man walking talking revolution

Just how on Earth are they effectively kept in check, especially regarding such issues as chemtrails, vaccinations, GMOs, water fluoridation, the FED or IRS, Iraq Wars (Remember the Dixie Chicks) and the perpetual war economy, etc.? It is what is well known in the industry as the Agency System.  Everyone at a certain level and above is required to have an agent.  The stars also have an obvious need for their attorneys to vet their contracts and legally bless other business arrangements.  This is where and how every star, in every sphere of life, in kept in total check.  If they do something wrong, they hear it loud and clear from their agent (or BAR attorney).
That’s not to say that they cannot leave the reservation of political correctness as they sometimes do.  However, their agent or attorney will immediately tell them that they are in deep trouble depending of course on the nature of their indiscretion or ‘bad behavior’.  The agents reign supreme in this Agency System dynamic, as any star will admit.  Whatever the agent says, goes. If that advice and/or consultation (read: strict orders) is not followed to the “T”, the celebrity risks their entire future.  The same goes for legal advice from the lawyer.  If the star ignores that legal counsel, they risk their career.  Period!
Prince Died today after Talking About Chemtrails …
… New World Order Illuminati Depopulation?
This is precisely how the whole world of celebrities in maintained in virtual lockdown. TPTB will simply not tolerate anyone of their public stature ever leaving the reservation.  If they do attempt to leave in a serious way, they will almost always never be allowed back onto it; unless they do some very serious penance.
Then there is the case of Michael Jackson and O.J. Simpson, Whitney Houston and Prince, Joan Rivers and Robin Williams, among many others who are less famous.  In these cases the punishment proved to be death, and nothing short of it would be accepted for their ‘bad behavior’ (read threat to the PC establishment).
Whenever a star reaches certain heights, there is less tolerance of rule-breaking, and less likelihood to cut them slack.  That’s because when they go off script — really off script — the damage that they can do in just a single TV or radio interview or tabloid article is quite extensive.  Once that damage is done, it’s like the genie that CANNOT be put back into the bottle.

You see, the celebrities of America today exist solely at the pleasure of the corporatocracy. They perform as living commodities with a set value, net worth and revenue-producing potential.  In short every star is an asset.  However, they can also be a liability depending on how often they veer off the reservation.  In fact stars like Michael Jackson were worth more dead than alive.  Do you get it now?  And when they defy their corporate masters like Michael often did, there is only one way left for their anonymous taskmasters from on high to deal with them.
Particularly for those celebrities who are hip to the agent control matrix (aka Agency System) will there be problems from time to time.  In those cases the WSG strategically and tactically uses the mainstream media (MSM) to keep them in check through a system of MSM carrots and sticks.  Likewise, the well established Agency Systems (and power attorneys) of Hollywood and Nashville and Professional Athletics are also used quite effectively to scare them back onto the reservation.
There is much, much more to this Agency System that every star and celebrity absolutely loathes, but they know they must tolerate it or else they can be quickly turned into a nobody, or criminal, or debtor, or has been, etc.  This is really how it works, on a very superficial level. The whole control matrix is actually much deeper than this what with Monarch mind-control programming and MK Ultra techniques having been effectively utilized over many decades. The whole place has been quite effectively controlled in ways that very few — in and out of the “System” — are even aware of.
By the way, Prince and the REVOLUTION was the name of his first band.
WHEN DOVES CRY by PRINCE and the REVOLUTION
The following article on the inexplicable death of Prince only scratches the surface of the star’s life that triggered the Agency System MO which is at work 24/7 across the country.  They’re not called agents for nothing!
The Millennium Report
April 22, 2016
Editor’s Note
The following perceptive comments were sent by one of our readers.  TMR has always preached that every major event covered by the MSM is almost always being used as a means of distraction, diversion, and/or misdirection.  As follows:

I saw your Prince article this morning and as always you guys are always at the cutting edge of news and commentary. I felt that this gives the TPTB a DISTRACTION for what they are really up to—Barak visiting Saudi and the Queen, scolding the UK for wanting to leave the EU, and the current push for all of the free trade “agreements” that are being pushed on us unaware.  I think a good article (maybe one of your readers can find one) is how the treaty process works and how an “agreement” is not a treaty and certainly not a valid contract from the American people. “Caveat Emptor” to the other nations signing on—because we will have grounds to revoke/terminate.  The real question is what do they NOT WANT US TO SEE by putting the media spotlight on Prince.  Because his death is “news-worthy” they can run his music and videos non-stop—which he spent a career trying to keep from happening.  What a great cabal distraction.
— Tyla Gabriel

MYSTERY surrounds the death of pop icon Prince – but many claim the singer “knew too much”.

The 57-year-old was found dead in a lift at his Paisley Park studios yesterday days after he suffered a medical emergency on board his personal jet.Conspiracy theorists were quick to raise question over the Purple Rain singer’s death just hours after the shock news filtered through.Speculation is rife among the online alternative news community claiming the Minnesota-born legend – born Prince Rogers Nelson – was an advocate for conspiracy theory culture.Prince is claimed to have predicted the September 11 terrorist attacks THREE years before the tragedy, spoken out about chemtrails and may have warned fans of his impending death. 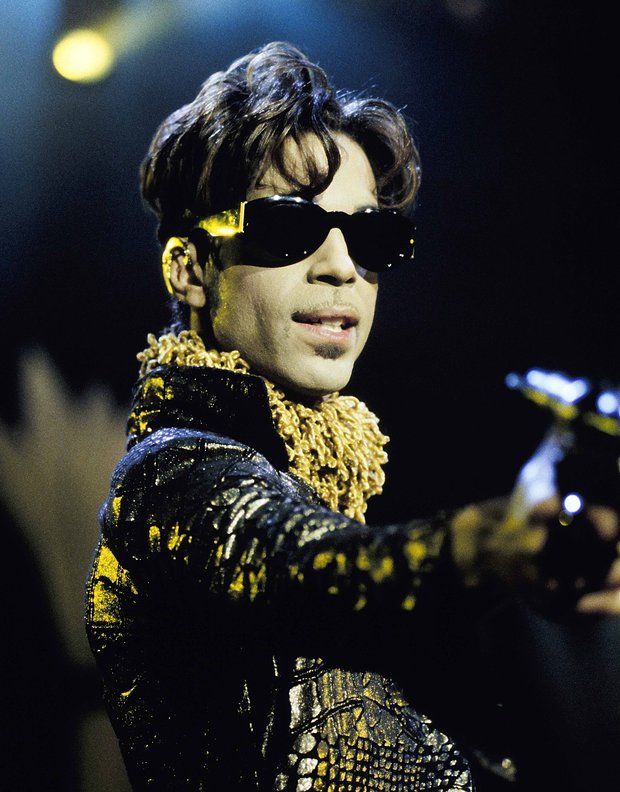 GETTYSHOWMAN: Prince in concert An eerie 1998 gig recording online suggests the star chillingly predicted the atrocities in New York and Washington in 2001.Al-Qaida and its demonic leader Osama bin Laden claimed responsibility for the worst attack on US soil in history.The clip, which is said to have been recorded at the his show in Utrecht, the Netherlands, on December 23, 1998, includes a spine-tingling extract.He sings: “I got to go back to America. I got to get ready for the bomb.“Osama bin Laden, get ready to bomb. 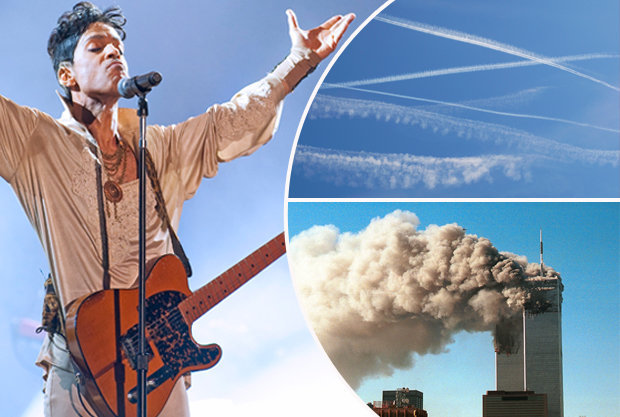 GETTYCHILLING: Prince sang about an Osama bin Laden bomb in 1998 and discussed chemtrails “America you’d better watch out.“2001 hit me.”In an interview with American chat show host Tavis Smiley, Prince openly talked about the chemtrails conspiracy.Truth seekers have long claimed governments are secretly spraying chemicals onto the general public by high-flying aircraft as a form of warfare or human population control.Prince discussed the phenomenon on the show and claimed he used to see “trails in the sky” all the time, citing Dick Gregory’s theory. 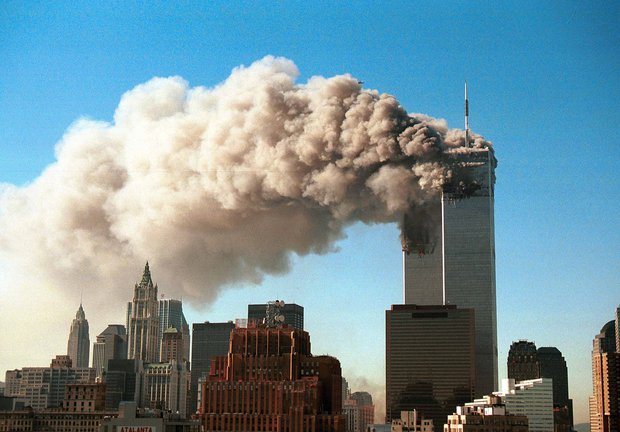 Musician Prince was found dead aged 57 at his Minnesota estate just days after being rushed to hospital. 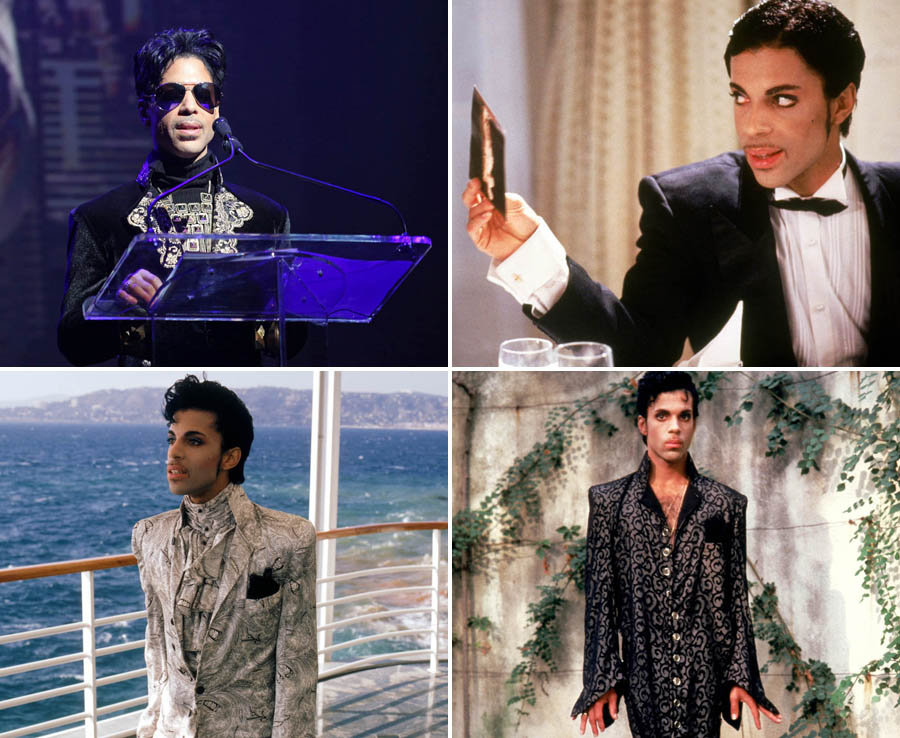 “Then you started to see a whole bunch of them and the next thing you know everybody in your neighbourhood is fighting and arguing and you didn’t know why.”

He references chemtrails in the song dreamer, found on the 2009 album Lotusflower.

Prince compares the modern world as a plantation and describes chemtrails being sprayed on the masses below.