OUT OF MIND » TRUTH IN CONSPIRACY THEORIES? » MISSING & CRASHED PLANES » The BBC documentary that reveals the truth about the fall of Malaysia Airlines MH-17 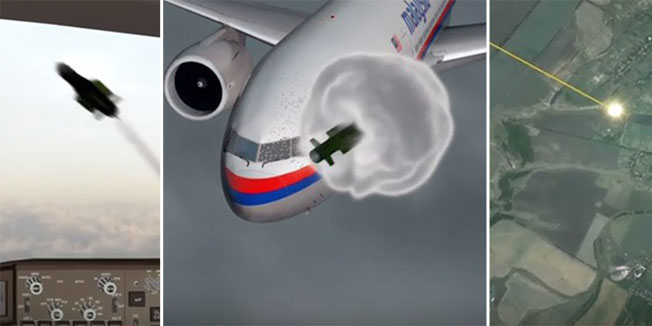 What is the truth about the demolition of the Malaysian Boeing in Ukraine? BBC Documentary reveals a completely new information about the fall of the aircraft

Conspiracy theories appear after many accidents, terrorist attacks and natural disasters, therefore, so are not surprising conspiracy theories related to the shooting down of Malaysia Airlines flight MH17 in Ukraine, writes the BBC.

The story begins in the steppes of eastern Ukraine. It was a cold and windy day when there was held a commemoration for 298 victims. Everywhere around lay teddy bears and flowers brought by mourners. In fact, even then, 80 children lost their lives.

On 17 July 2014 Boeing 777 flew from Amsterdam to the Malaysian city of Kuala Lumpur Gavno. However, the plane suddenly crashed with were all passengers and crew members. This accident happened just a few months after the mysterious disappearance of another Malaysia Airlines.

At that time, the Ukrainian government and pro-Russian rebels were in a large armed conflict. After 15 months of investigation, the Dutch security service announced that a surface-to-air brand BUK, Russian-made plane hit. Immediately assumed that was fired by Russian soldiers or pro-Russian rebels, mistakenly thinking that it was a Ukrainian fighter plane. But the Russians were immediately offered his explanation. Or more thereof.

Four days after the accident, the Russian generals have accused the Ukrainian side to deliberately diverted the flight MH17 off course into a war zone. They pointed out that the Russian radar to see the outlines of the Ukrainian fighter Su-25 equipped with missiles.
The first theory about the Gripen

While the theory that the MH17 broken down fighter aircraft to expand Internet, a freelance journalist from Berlin, Billy Six, he threw himself into research. He spent six months in Ukraine and interviewed more than a hundred people. Sam Billy thought that the plane was hit twice: one-to-air missile, and the second time cannonball projectiles.

The first photographer who appeared on the scene, Oleg Vitulkin, a member of the pro-Russian militia, rejects accusations of Western countries and says that the projectile from the earth, surely someone saw it.

Vitulkin that day he did not see the other plane, but Natasha Voronin believes that it is. When the accident happened was harvest time and she was in the field when he heard a loud explosion. She looked up at the sky and saw shows two aircraft flying in opposite directions.

But Western military analysts scoff at the claim of the Russian defense minister that the Ukrainian military plane crashed MH17. According to them, the Su-25, extra aircraft that operate near the ground and is not designed to fly at high altitudes, a MH17 was flying at 10,000 feet when it hit.

But the Russian media that did not keep. J ana Erlašova, a journalist from the state television Russia Today, I found a lot of witnesses who say they saw the two planes. With the help of Russian military forces, and even hosted this experiment demonstrated that the Su-25 is capable of flying at high altitude.

Later it turned out to Su-25 could achieve that height only if they rejected all their weapons. In addition, the Boeing 777 is much faster than the Su-25, neither from that side theory does not hold water.

As if that in itself is not enough, the Dutch investigators from the wreckage of MH17 remove shrapnel that clearly belong to surface-to-air missile.

But what about those witnesses who say they saw the second plane? Just as much, if not more, witnesses said that does not see the other plane. In addition, after being hit, MH17 broke up the first two, and then into smaller units so that at some point might indeed look as if they were two aircraft in the sky.

As for the Russian radar is concerned, the latter explanation could account for the radar where you can see such a large debris.
Another theory about the Gripen

Four months after the accident, the most popular Russian TV station Rossija 1 published a satellite image on which the allegedly seen and very strong supersonic MiG-29 and just as he fires a missile into the passenger plane. But even before this theory has spread, denied he Eliot Higgins, a former officer and now a blogger. He proved that the picture actually Su-27 aircraft that Sukhoi products factory, the same one that produces and Su EU25. Also, it was shown that the ratio capture completely wrong.

"If these ratios are accurate," says Higgins, "MH17 plane would be dug for more than 6 kilometers, or to a plane normal size, but only 300 meters away from the satellite."
The first theory of combat aircraft - continued

Back then there was a new theory about the plane Su-25, which was allegedly broken down passenger aircraft. Russian newspaper Komsomolskaya Pravda allegedly found a pilot, a captain Vladislav Voloshin, who personally supervised the loading of the air-to-air missiles in the Su-25, and who said that after the plane returned to base without a projectile.

This man actually found later, but said he was very upset when he was almost accused of having participated in the destruction of a passenger aircraft. He said that the missiles actually boarded the Su-25, but it was an air-ground missiles. He was very upset and because when firing these rockets killed two of his colleagues. In addition, the flight of the airplane Su-25 took place just six days after the accident, a fatal July 17, there were no flights.
The theory of another type of rocket

But many Russian media continue to insist that it was not a missile type BUK. Journalist TV channel Russia Today said that she tried to find evidence that this indeed was a 5.5 meters long and 700 pounds heavy rocket, but failed to find. This was confirmed by a local photographer Oleg Vitulkin.

However, a series of photographs posted on social networks shows the launch pad, which is able to fire these rockets, not far from the crash MH17. Moreover, one of the photos ramp is located almost exactly on the site where the Dutch investigators found that it fired the rockets.

Also, when the firing of such missiles, heat is released, and one of the published photographs shows a large piece of scorched earth and grass. But is it really possible that no one has photographed firing rockets so big? After the accident indeed occurred two photos showing smoke after launch rockets.

On the other hand, Higgins argues that the recordings authentic as can be seen by cables from the balcony visible in the picture. And another blogger, Marcel van der Berg, says that pictures are authentic.

Reporters BBC, they went to the site to watch the place from which he allegedly missile launch. Also, they talked with očevitkinjom that fateful day with his daughter near the digging potatoes. She said that she saw something flying and first thought it was a plane, but later realized that it was a missile. A few minutes later she heard a strong explosion.
Ukrainian theory of BUK-u

The Russian side has published a series of photographs that allegedly show the Ukrainian launch pad for BUK missiles: the first image is a ramp at a military base, and at the next position where the shot came. It is, therefore, the Russian alternative theory that the attack aircraft and shows that the MH17 hit by a rocket fired from the Ukrainians.

But the investigator Eliot Higgins says that the photos are fake. Although one of these Russian photo purportedly showing the launch pad at the position from which the shots were fired, satellite image captured by the American Digital Globe, clearly shows that on launch pad accident was still in the database.

In addition, in all probability, the position from which the shots were fired at the time of the accident had not been in the hands of the Ukrainians.
propaganda war

Then what really happened? And why there are so many different theories about what happened to MH17? And why, unlike many theories - such as the attacks of September 11 - the country is so misplaced that they suppress?

A British author who has worked for several years in Russia, says the Kremlin adapt doctrine 'masking', or stratagem, the digital age.

Peter Pomerantsey, author of the book 'Nothing is true and everything is possible: Unreal heart of the new Russia, "says President Vladimir Putin has complete control over the media in Russia, which now act as a cult that ejects non-stop conspiracy theories, designed to confuse Ruse and break their critical thinking.

Steven Pifer, a former US ambassador to Ukraine, with the match; says that the main TV stations, such as Russia Today function as an extended arm of the Kremlin and publish their propaganda.

The goal, he says Pifer to leave the circulation of several different theories that will create a smoke screen and cause confusion and finally to convince people that the truth does not exist.

Neither the Russian Foreign Minister, nor the producers of rockets did not want to discuss this issue with the BBC. Russian authorities reject any connection with the demolition of the plane MH17. Dutch investigators say they are wrong and that they will conduct their own investigation.

However, the Russians with the Dutch yet in one thing: the Ukrainian government is not really the time to close its airspace for civil aviation, and it is certainly supposed to do after their plane was shot down.

And while the Russian side has a different theory of what actually happened, Ukrainian Prime Minister Arseniy Yatsenyuk's resignation shows how it is that the Russians are pro-Russian rebels equip missiles and led them to take the plane down. 'They know who committed the crime and the fear of justice! "Says Yatsenyuk.

OUT OF MIND » TRUTH IN CONSPIRACY THEORIES? » MISSING & CRASHED PLANES » The BBC documentary that reveals the truth about the fall of Malaysia Airlines MH-17