Cell Phones Destroy Your Tooth Fillings And Release Poison Into Your Blood on Fri Apr 29, 2016 5:21 pm

Do you have amalgam fillings? Do you use a mobile phone? If the answer is yes, then your health is in danger! Moreover, there is an abundance of research which point out to the danger coming from the radio frequent electromagnetic waves emitted by mobile phones. What’s more, there is also a lot of research pointing out to the health risk associated with amalgam fillings. However, what you did not know is that the newest research shows that this two health risks are related!

Electromagnetic radiation can cause increased release of mercury in the organism

Newest studies have shown that exposure to electromagnetic radiation; especially radiation from mobile phones increases the release of mercury in the organism from the amalgam fillings. However, the source of the electromagnetic radiation is not solely the mobile phone, but computer monitors, WI-FI, TVs, microwaves, and other devices. What’s more, amalgam fillings are the biggest source of mercury in the organism and this is not good at all since mercury is a potential neurotoxin which can cause various immunological and neurological disorders. 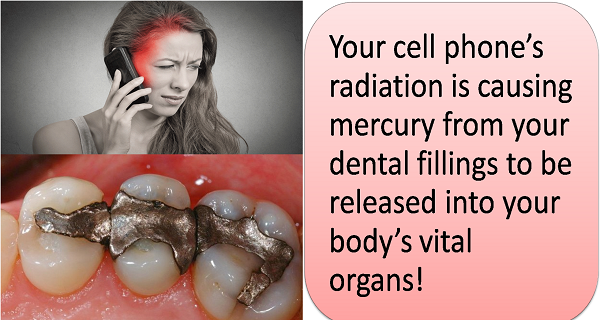 According to Dr. Russell Blaylock, the nervous, immune, and the cardiovascular system are the ones mostly affected by chronic exposure to mercury. What’s more, he also points out to the fact that there is more and more evidence that the toxicity of mercury has a key role in numerous cases of Alzheimer’s disease and other neurodegenerative diseases as well. Furthermore, research showed that amalgam fillings constantly release mercury vapor and that 80% of that vapor is immediately absorbed in the bloodstream through the lungs. When present in the blood, mercury vapor can immediately enter the cells.

This deadly combination reacts through galvanism as well i.e. the amalgam fillings create electricity which increases the release of mercury vapor thus causing other harmful effects. This electricity is measured in micro amps and it usually amounts around 5 micro amps. Clinical studies about oral galvanism showed that electricity over 5 micro amps causes significant health problems in the organism such as headache, migraine, nausea, and vertigo. All of these symptoms disappear after the amalgam fillings are replaced.

One clinical study showed that the differences of the electric potential over 50 millivolts are pathological and that they cause galvanism, leukoplakia or toxic and allergic reactions. Additionally, it has been proven that people who are more exposed to electromagnetic radiation such as those emitted from microwaves have higher levels of mercury in the organism and that they secrete higher amounts of mercury. During studies conducted on both animals and humans, it was discovered that the electromagnetic radiation causes leaching of cells calcium and affects the homeostasis calcium, which is also a factor that decreases melatonin levels. This is important since melatonin protects us from harmful effects of mercury and free radicals by regulating circadian rhythm.

How to protect yourselves from electromagnetic radiation:

The best way to protect yourselves is to purchase your own detector of electromagnetic radiation and in this way identify the places with the highest amounts of radiation.

How to protect yourselves from mercury