This Drink Is A Medicine For More Than 60 Diseases, Also Kills Parasites And Supports Balanced Blood Sugar Sun May 01, 2016 1:21 am 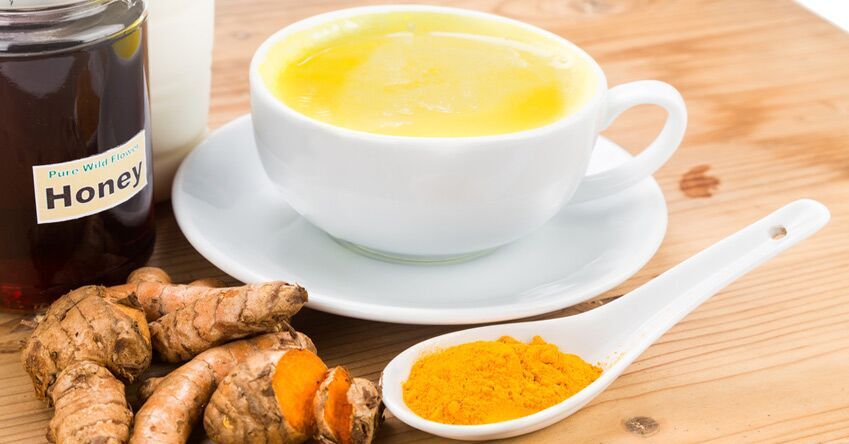 The natural world is full of plants with an astonishing variety of health benefits. Much of modern medicine attempts to isolate these compounds and turn them into medicines, but there may in many cases be significant advantages to using them in natural form.

Between them, the ingredients in this healing tea can help to:
• Reduce inflammation
• Flush parasites from the body
• Reduce risk of cardiovascular disease and certain types of cancer
• Help regulate blood glucose

Preparation
• ½ tsp powdered ginger
• ½ tsp powdered cinnamon
• ½ tsp powdered turmeric
• 1 tsp coconut oil
• 1 tsp honey
•
Mix all ingredients to a paste in a mug, then add hot water and stir thoroughly. If you don’t want to wait for it to cool to a drinkable temperature leave space in the mug to top it up with cold water.
Limit consumption to two drinks per day; though all the ingredients are good for you, all things in moderation.
So why does it work? Herbal or ‘traditional’ medicines are often also supported by medical research as well as anecdotal evidence.[1] All of the ingredients in this tea have been scientifically demonstrated to support health. Here we’ll break the ingredient list down and explain in brief what each is known to do. (check the foot of the article for the actual scientific research).
Ginger
Ginger has been used for thousands of years in medicine, particularly for treating digestive problems and inflammatory diseases, including rheumatoid arthritis. [2] The anti-inflammatory effects of ginger are also thought to help in the treatment of cardiovascular disease. [3] More recently, it has been shown to inhibit growth of some types of cancer cell. [4][5]
Cinnamon
Not only does cinnamon smell and taste delicious in a variety of foods, it’s also great for helping the body regulate blood sugar [1][6] and helping to lower levels of LDL cholesterol. [7] High LDL levels are associated with increased risk of cardiovascular disease. Certain polyphenol compounds found in cinnamon have antioxidant properties, reducing oxidative stress on the blood vessels and further reducing risk of cardiovascular disease. [8]
Turmeric
Another member of the ginger family, turmeric gains its distinctive golden-yellow hue from the compound curcumin. It’s this compound that’s responsible for turmeric’s antioxidant, anti-inflammatory and antiseptic properties. There is evidence to suggest that turmeric can reduce the risk of cancer, both by reducing oxidative stress on the body (which can damage DNA) and by inducing cell death in cancer cells. [9][10]
Another good tip is to add a little fresh black pepper, which has an enhancing effect on bioabsorption of the beneficial turmeric compounds.
Coconut oil
Coconut oil contains medium chain saturated fatty acids, which when consumed flush out internal parasites. The main purpose of including coconut oil here, however, is also to aid absorption of turmeric. The required compounds have a low absorption in the human body, and certain types of fat help to increase absorption.
If you don’t have or can’t use coconut oil due to allergies, try another cold pressed oil such as extra virgin olive oil or hempseed oil.
Honey
There can be truth in the lyric ‘a spoonful of sugar helps the medicine go down’, and honey provides that drop of sweetness along with a host of health benefits. Honey has anti-bacterial properties, which makes it a natural weapon against bacterial infections. It’s also not just included in cough mixes because it tastes good – honey has been shown to reduce coughing. [11] It also acts as an antioxidant, lowering the risk of diseases associated with oxidative stress.
Safety Note: If you’re on any medications, it’s always worth checking whether any natural remedies you are considering taking will interact. If in doubt, consult your doctor.

» This edible medicinal mushroom from China can lower blood sugar and blood lipid levels naturally
» Marijuana, blood sugar control linked, study says
» ‘Mushrooms of Immortality’: Reishi Mushrooms an Ancient Medicine for Modern Diseases
» "SUGAR is so detrimental to one's health, that one should not even serve it to ones worst enemy!" referring to a cake made of refined wheat and SUGAR!!!
» ATTN: RH NEGS: Monkey Blood, RH Negative Blood Types, Y-DNA haplogroup E1b1b Blood Grouping Shared By Royalty And Dictators Alike