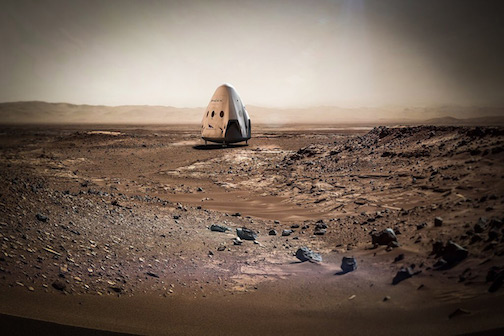 HUGE news! SpaceX/Elon Musk plans sending Dragon to Mars as early as 2018 (a lot sooner than expected).
Apr 27 SpaceX plans to send a spacecraft to Mars as early as 2018
Apr 27 THREE WORDS: SPACEX… MARS… 2018
As you may know, I consider this to be the beginning of the BIGGEST MOMENT in the history of mankind. The red future that is coming will be much more real in September when Musk/SpaceX will unveil their Mars Colonial Transporter system and the entire architecture at the International Astronautical Congress. (There is going to be a big buzz over this so something exciting to look forward to there.) September 2016, by the way, is big/intense in many other ways, so a month to watch for sure.

This Mars colonization process is the biggest, most profound and important thing happening in the world now and will continue to be so for decades. It is mankind's DESTINY carved on the surface of Earth in the form of the NILE river which is a literal "RIVER OF TIME". I decoded it, and it said "Mars, 21st century, end of history" - see The Nile Decoded for a crash course on the Time River theory.
What is about to happen is the fracturing of time/history. Mars is the first bifurcation point, then all hell breaks loose. Relativity, time travel, extra dimensions, psi, VR... Pandora's box opening, basically. This big Martian moment in the 21st century will connect back to the time of Sumer, ancient Egypt, etc. (and so naturally my view is the those "gods" there were... you know, us from here, at least some of us... maybe Nazi remnants). Stuck in a time loop, good or bad? Is reincarnation good or bad? Is there an escape from it? These are big questions for sure.
*    *    *
The political trajectory of Marco Rubio - name meaning "Mars Red" - is likely heavily intertwined with all this as I've been saying for years now. So it was not necessary for Rubio to actually win in the 2016 election cycle. He did more than enough to become a household name, and 2020 is coming soon enough when Mars will be much hotter and will be more publicly emerging as the next New World as ordained by destiny.
*     *    *
Related articles from past: