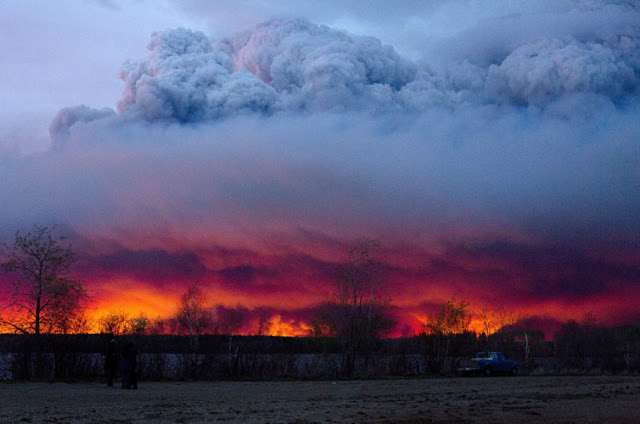 Photo www.thestar.com
Canadian Fort McMurray Fire update
A large wildfire that has been burning for days exploded in size around Fort McMurray, Canada, growing eight times larger from Wednesday afternoon to Thursday afternoon.
Alberta Premier Rachel Notley said in a Thursday news conference that the blaze grew from 25,000 acres to 210,000 acres in just 24 hours, making the fire larger than the city of Chicago.
Meanwhile, the number of evacuees continues to rise as more residents are pushed from their homes by the massive blaze.
Photo www.huffingtonpost.ca 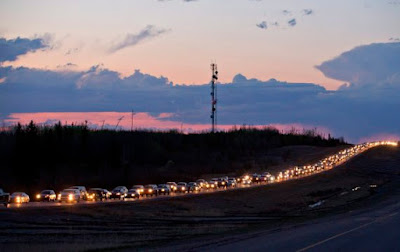 "Homes have been destroyed. Neighborhoods have gone up in flames.
The footage we've seen of cars racing down highways while fire races on all sides is nothing short of terrifying," Prime Minister Justin Trudeau said in Parliament Thursday.
He called it "the largest fire evacuation in Alberta's history."
"You could add five times the number of firefighters, but you can't get all the embers," Center for Fire Research and Outreach at University of California, Berkeley co-director Bill Stewart told the Associated Press.
"There's no way to put out every ember flying over firefighters' heads."
The Alberta government said Thursday that more than 1,100 firefighters, 145 helicopters, 138 pieces of heavy equipment and 22 air tankers were brought in to fight the destructive inferno.
Fort McMurray International Airport's main terminal appeared to escape damage Wednesday night, but CBC reported Thursday morning that several other airport buildings were destroyed.
Before the airport was closed Wednesday night, flames could be seen nearby, AP said.
The airport was built just two years ago at a cost of $258 million ($200 million U.S.), according to CTV News Calgary. 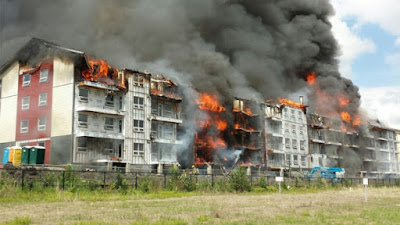 The airport only suffered minor damage due to the efforts of the firefighters, Alberta Emergency Management Agency representative Scott Long told AP Thursday.
They have focused on protecting key infrastructures like the water treatment plant, the hospital and the airport.
Later Wednesday night, authorities issued another mandatory evacuation order for Anzac, Gregoire Lake Estates and the Fort McMurray First Nation - about 900 people in total, according to the Regional Municipality of Wood Buffalo.
All people were safely and successfully evacuated, the group also said.
According to CTV News Calgary, some had evacuated into those areas located about 30 miles south of Fort McMurray and were forced to evacuate again.
Officials said all efforts have failed to suppress the large inferno that invaded Alberta's Fort McMurray, even with firefighters working around-the-clock to fight the blaze.
A provincial state of emergency was declared by the Alberta government Wednesday evening as the raging fire showed no signs of weakening. 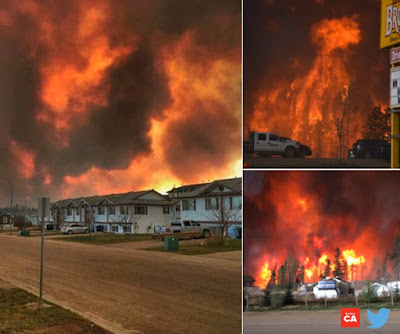 "This is a nasty, dirty fire," Fort McMurray Fire Chief Darby Allen told the AP.
"There are certainly areas of the city that have not been burned, but this fire will look for them and it will find them and it will want to take them."
At least 88,000 people have been forced to flee as the fire quickly spread, putting homes, schools, businesses and lives in danger, according to the Globe and Mail. Local officials said Wednesday that 70 percent of the homes in Beacon Hill have been lost, and the most recent census said the neighborhood is home to 2,200 residents living in more than 700 dwellings.
Other neighborhoods reported an even higher percentage of homes lost.
At a Wednesday morning briefing, Notley said 1,600 structures had been destroyed in Canada's main oil sands city.
So far, no serious injuries or deaths have been reported from the devastating blaze.
"We were not told to evacuate when we left.
We could hear the flames across the road.
We never waited to be told to leave," said Fort McMurray resident Jason Edmonson.
"It felt like we had no other choice but to go.
It was like living in a movie.
So surreal. We lost everything, including two cats.
No insurance, no time to think clearly.
I'm very thankful that myself and my friends and family are safe.
The city, police, firemen and everyone else who helped were amazing.
Including nearby towns."
As residents scattered to escape the flames, even the evacuation routes were dangerous as the fast-moving inferno burned along the roadways.
For thousands, just getting out of the area was a challenge.
"It was apocalyptic," said Fort McMurray resident Will Flett.
"Each side of the highway was engulfed in flames. I could feel the heat - even with my windows turned up and the air conditioning on - I could still feel the heat of the fire on both sides of me.
"It was scary because you didn't know what was on the other side.
There was a point where I couldn't see a foot in front of my vehicle.
I didn't know what was in front of me, you just had to take that chance to get out."
Two women gave birth to babies in a work camp used to house evacuees north of Fort McMurray, according to CBC.
The newborns are doing fine, the report added, and leaders at the evacuation site said the births boosted morale at the camp.
"We've had two babies born on our site so far," Blaire McCalla, communications manager with a company that provides housing for oilfield workers, told CBC. "Can't say that ever happened before." 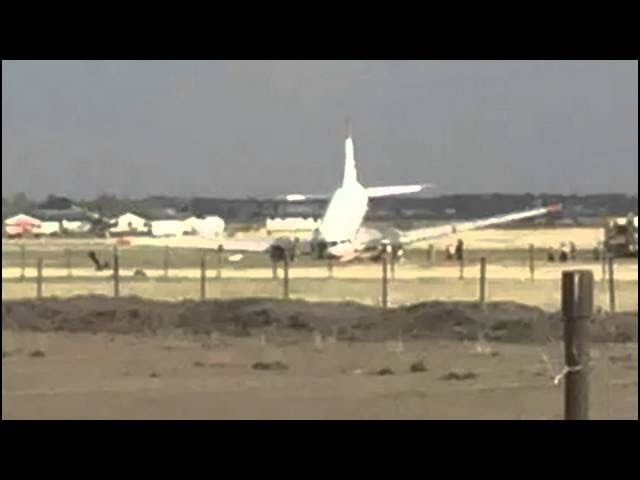