OUT OF MIND » THE INSANITY OF REALITY » POISON PLANET » Dead Fish, Dying Planet, and Dangerous Denial

Dane Wigington
Contributor, ZenGardner.com
Fish are dying, wildlife is dying, the entire web of life is dying, but willful denial of verifiable realities continues to thrive. The global fish die-off is already beyond catastrophic, but the “experts” seem to have little to offer in the way of answers. Why? Because those in power are largely in control of the chess board, at least for the moment. Those who print the money (the bankers) control militaries, countries, and every imaginable institution down the line. How can we expect the paid “experts” to disclose the true severity of what we collectively face (and the true causes behind the converging catastrophes) when their paychecks and pensions almost always depend on them not disclosing the whole truth?
Those who are truly in the know and thus in a prime position to sound the alarm face much more dire consequences than the loss of their employment. In regard to the global fish die-off, what don’t we hear from the “experts” and the media? That the oceans (and fresh water lakes) are rapidly heating along with the rest of the planet. That this heating de-oxygenates the water and fuels algae blooms which further de-oxygenate the water. We don’t hear that warming oceans are causing mass deposits of formerly frozen methane to thaw and release, also contaminating and deoxygenating oceans. And we certainly never hear a word from the “experts” about the ongoing climate engineering assault that is exacerbating the now runaway warming (in addition to contaminating the entire planet). Of course, we also never hear about the military’s other devastating activities that are slaughtering marine life, or about the military’s willingness to lie about their actions.
And about Fukushima, yes, it is a catastrophe for the seas (and the planet as a whole), but there is much more to story in regard to the fish die-offs. The bottom line is that the vast majority of media sources (even “independent” sources), are only telling half-truths at best. 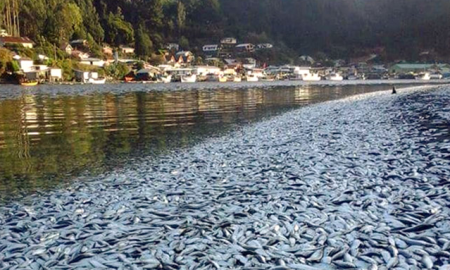 Massive recent fish die-off on Chile’s Queule River. Photo credit: Sernapesca
First, about the rapidly accelerating global fish die-off, the excerpt below is from a report that was just posted by Michael T. Snyder from “The Economic Collapse” website.

Why are millions upon millions of dead sea creatures suddenly washing up on beaches all over the world?  It is certainly not unusual for fish and other inhabitants of our oceans to die.  This happens all the time.  But over the past month we have seen a series of extremely alarming mass death incidents all over the planet.  As you will see below, many of these mass death incidents have involved more than 30 tons of fish.  In places such as Chile and Vietnam, it has already gotten to the level where it has started to become a major national crisis.  People see their coastlines absolutely buried in dead sea creatures, and they are starting to freak out.
For example, just check out what is going on in Chile right now.  The following comes from a Smithsonian Magazine article entitled “Why Are Chilean Beaches Covered With Dead Animals?“…
Compared to other countries, Chile is almost all coast, and that geographical fluke means that the country is known for its beautiful beaches. But that reputation may be on the wane thanks to a new sight on Chilean shores: dead animals. Lots of them. Heaps of them, in fact. As Giovanna Fleitas reports for the Agence France-Presse, the South American country’s beaches are covered with piles of dead sea creatures—and scientists are trying to figure out why.
Tales of dead animals washing up on shore are relatively common; after all, the ocean has a weird way of depositing its dead on shore. But Chile’s problem is getting slightly out of hand. As Fleitas writes, recent months have not been kind to the Chilean coast, which has played host to washed-up carcasses of over 300 whales, 8,000 tons of sardines, and nearly 12 percent of the country’s annual salmon catch, to name a few.
Authorities in Chile are scrambling to come up with a reason for why this is happening, but nobody appears to be quite sure what is causing this tsunami of death.
In Vietnam, things are even worse.  At this point, so many dead fish and clams have been washing up along the coast that soldiers have been deployed to bury them…
Millions of fish have washed up dead along a 125-kilometre stretch of the Vietnamese coast in one of the communist country’s worst environmental disasters.
Soldiers have been deployed to bury tonnes of fish, clams and the occasional whale that began dying in early April along the north-central coast, including some popular tourist beaches.
Vietnamese officials facing growing anger over the disaster have not announced the official cause of the deaths, which have affected the livelihoods of tens of thousands of families.
Elsewhere in Asia, there have been similar incidents.  For example, CNN is reportingthat one lake in southern China is currently dealing with 35 tons of dead fish…
At least 35 tons of dead fish appeared in a lake in southern China, leaving residents stunned.
The piles of fish washed up in a lake in Hainan province on Wednesday, Chinese state media reported.
Residents expressed concerns on pollution, but local authorities said the fish died as a result of salinity change.
On the other side of the world, similar incidents have also happened in major lakes.  Here is one example from Bolivia…
Thousands of dead fish have washed up onto the shores of a lake in Bolivia.
Just before they died, some of the fish had just hatched from their eggs in lake Alalay, in the central Bolivian city of Cochabamba.
No one yet knows the number of dead fish, but they have stockpiled five cubic metres (177 cubic feet) so far, so it’s possible there is over a tonne of dead fish in the lake.
And here is an example from Brazil…
More than 200 tons of dead fish were removed from the Furnas Lake on Sunday (1st) in Alfenas (MG). According to the Military Police of the Environment, both fish raised in ponds, networks and those who are released, all of the tilapia species in the lake were affected. The damage to the psicultores is estimated at around R $ 900 thousand.
I could go on and on all day with examples such as these.
Just within the last month, 40 tons of fish died in India, 65 tons of fish died in Cambodia, 70 tons of fish died in Colombia, and millions of fish “suddenly died” in Indonesia.
So why is this happening?
I don’t know.
Could it be possible that these mass deaths are somehow related to the alarming earth changes that we see happening all around us?
Without a doubt, we have seen a dramatic rise in seismic activity during the early portions of 2016.  There has been a series of very destructive earthquakes around the world in recent months, and once dormant volcanoes are coming to life all over the globe with distressing regularity.
Of course humanity has done much to destroy the planet as well, and we continue to deal with the aftermath of the Fukushima nuclear disaster.  I do think that it is very interesting to note that most of these mass fish deaths have happened in nations that border the Pacific Ocean.
I am certainly not claiming to have an answer for why so many fish are dying.  All I know is that millions upon millions of dead fish are washing up on shores all over the globe, and people are really starting to freak out about this.
We live in a world that is becoming increasingly unstable, and major disasters seem to be getting more frequent and more intense.  Just look at what is happening up in Alberta right now.
I believe that we are entering the “perfect storm” that myself and so many others have been warning about for so long.
Or could it be possible that I am just being overly dramatic?

Though I am grateful to Mr. Snyder for helping to document the extremely alarming fish die-off, it is interesting that he seems to be in complete denial of the fact that our planet is descending into total meltdown.

But some climate “experts” are really playing down the impact of El Nino.  Instead, they are attempting to convince us that what we are witnessing is simply the result of “man-made climate change”, and they are using this as an opportunity to promote their agenda.

Is our climate really as damaged as the “experts” are telling us? No, in reality, it is much much worse. Unfortunately people like Mr. Snyder are only telling half-truths, climate engineering and climate realities are not a part of the narrative for Snyder and others like him. The engineered “cool-downs” of key regions like the most populated zones of the US has helped those in power keep populations confused and divided on the true state of the climate. When confused, many end up actually toeing the line for the very power structure they claim to be fighting against. How fast is the planet warming? The recently released data reflected on the 20 second animated graph below paints a very clear and very dire picture.

GIF credit: Ed Hawkins, climate scientist at University of Reading
Will global geoengineering help? No, 70 years of global climate engineering has only helped to further fuel the overall warming of the planet. Those in power have always known that climate engineering/solar radiation management/weather warfare would only ever cause immense and irreparable harm,  geoenginering is a weapon of total control they will never willingly give up. Man’s attempt to engineer earth’s life support systems is the absolute epitome of human insanity. Geoengineering has played a major role in the dying of the seas. The planet is heating so rapidly that we may an ice free Arctic as early as September of this year, 2016. All mainstream media and most “independent” media will not mention such dire front line data. If the oceans die, the planet dies, and all of us with it. Do your part in the most critical battle to sound the alarm on the climate engineering insanity, educate yourself and learn how to make the most effective difference in the fight to raise critical awareness.
DW
+++
ZenGardner.com
[url=http://popup.taboola.com/en/?template=colorbox&taboola_utm_source=zengardner&taboola_utm_medium=bytaboola&taboola_utm_content=thumbnails-a:Below Article Thumbnails:]  [/url]
[url=http://popup.taboola.com/en/?template=colorbox&taboola_utm_source=zengardner&taboola_utm_medium=bytaboola&taboola_utm_content=thumbnails-a:Below Article Thumbnails:]by Taboola [/url]
[url=http://popup.taboola.com/en/?template=colorbox&taboola_utm_source=zengardner&taboola_utm_medium=bytaboola&taboola_utm_content=thumbnails-a:Below Article Thumbnails:]Sponsored Links [/url]
From The Web

OUT OF MIND » THE INSANITY OF REALITY » POISON PLANET » Dead Fish, Dying Planet, and Dangerous Denial