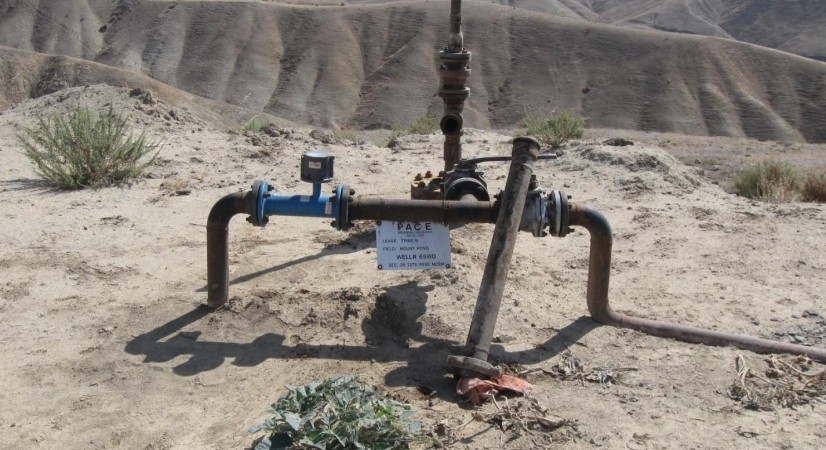 California Regulators Are Approving Fracking Permits Near Fault Lines
May 12, 2016


New research indicates that nearly 40 percent of new wastewater injection wells approved over the past year in California are perilously close to fault lines, increasing the risk of man-made earthquakes in the already seismically active Golden State.
The Center for Biological Diversity (CBD) found that 13 out of 33, or 39 percent, of new drill permits for wastewater disposal wells issued by regulators with California’s Division of Oil, Gas, and Geothermal Resources (DOGGR) between April 2015 and March 2016 were for drill sites within 5 miles of a fault.
The CBD also found that 26 of the 33 rework permits for wastewater disposal wells granted by DOGGR over that same period were for wells within 5 miles of a fault. Rework permits are required when a company wants to re-drill a well or alter a well casing.
The CBD said it is concerned about these rework permits because alterations to an injection well can signal that a company is resuming wastewater injections, increasing the volume of water injected, or injecting in a different area underground — all actions that raise the specter of induced earthquakes.
A study released in February found that wastewater injections were likely to blame for an earthquake swarm in Kern County, California, one of the biggest oil-producing counties in the United States. 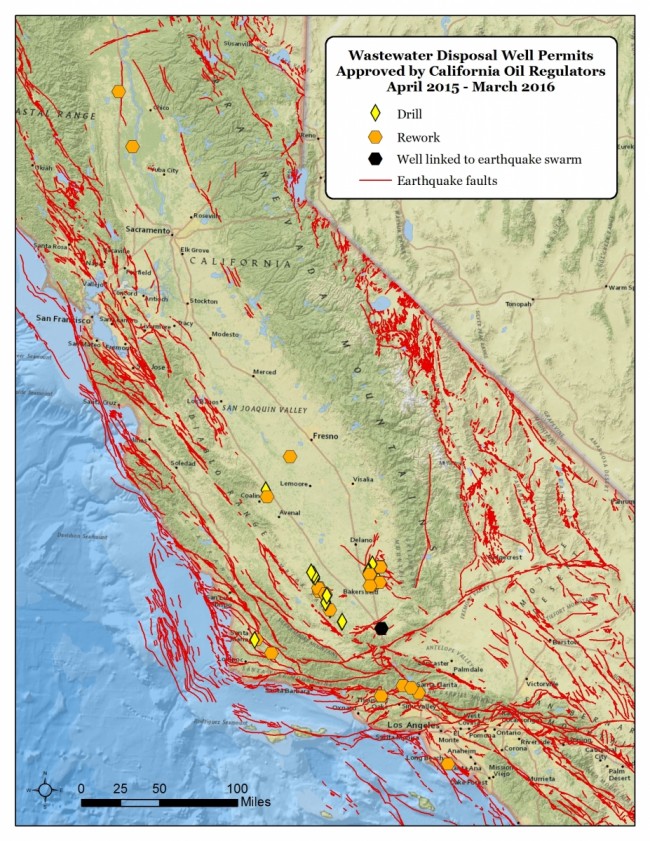 Map via Center for Biological Diversity.
DOGGR is no stranger to controversy, of course, having previously admitted to improperly permitting as many as 2,000 wells to inject fluids from enhanced oil recovery techniques like fracking into underground aquifers that should have been protected under state and federal law.
In a letter, the CBD urged California Governor Jerry Brown to “protect Californians from oil industry-induced earthquakes by ordering your regulators to stop issuing permits for wastewater injection wells within five miles of a fault.”
The letter notes that among the 26 rework permits issued was one for a Tejon oilfield well that has already been linked to induced earthquakes. That well was examined in the February study, which identified oil-waste injections as the probable cause of a series of earthquakes in 2005 near Bakersfield, CA, at least one of which was as severe as 4.7 in magnitude. The authors of the study said that “considering the numerous active faults in California, the seismogenic consequences of even a few induced cases can be devastating.”
“Gov. Brown’s administration is gambling with human lives by approving new injection wells dangerously close to earthquake faults across California,” Shaye Wolf, the CBD scientist who wrote the letter, said in a statement. “State oil regulators haven’t even halted injections into wells that scientists say caused an earthquake swarm. It’s only a matter of time before these reckless injections of oil wastewater trigger another dangerous quake.”
Oilfield wastewater injection in California more than doubled between 1995 and 2015, state records show, with more than 38 billion gallons of wastewater injected in 2015 alone. The use of extreme, water-intensive oil-and-gas recovery techniques like fracking and cyclic steam injection have contributed significantly to the rise in wastewater production.
The CBD’s Wolf co-authored a 2014 analysis that found a majority of the oil industry’s wastewater injection wells in California are near active fault lines, and that oil companies are injecting billions of gallons of oil-and-gas wastewater every year into hundreds of disposal wells in Southern California.
“Millions of people in major cities like Los Angeles and Bakersfield face the risk of manmade quakes because state regulators are recklessly rubberstamping dangerous wastewater injections,” said Wolf. “The best way to protect Californians from the menace of oil wastewater is to halt fracking and other water-intensive extraction techniques.”