OUT OF MIND » SUPER SCAMMERS!! RV & DINARIAN FRAUDS & THOSE THAT BUST THEM OUT! » BENJAMIN bla bla bla FULFORD » The David Crayford Discussion Continues… Benjamin Fulford, the Collateral Accounts, and Who Owns the Gold

The David Crayford Discussion Continues… Benjamin Fulford, the Collateral Accounts, and Who Owns the Gold

The David Crayford Discussion Continues… Benjamin Fulford, the Collateral Accounts, and Who Owns the Gold Sat May 14, 2016 1:53 pm

The David Crayford Discussion Continues… Benjamin Fulford, the Collateral Accounts, and Who Owns the Gold 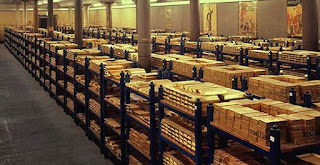 The first part of this series is listed below, and embedded within the preamble of the Event Chronicle's compilation.

I found Crayford's statements discussing who the wealth really belongs to quite interesting. He suggests that the wealth held in the Collateral Accounts is not the people's, it is "GOD's." He further claims that those people who worked to pull it out of the ground were "paid a fair wage" and the wealth is not theirs anymore. This suggests that those who were defrauded to accept such paltry payments have no recourse in law, which is a fallacy.

But, the basis for the wealth belonging to the creator is actually fairly sound, for in truth, all ownership is only temporary. When we die, what we had returns to the Earth. On the other hand, the creator has no need for money, gold, or any other representation of value. This means the wealth is held in trust for humanity, which Crayford only makes a small reference to.

Crayford goes on to say that the people can't be trusted with this wealth. So one question I have is, if the wealth is not the people's, and it is God's, where do the trustees of the accounts factor in?

A trustee is beholden to a executor of a trust, the originator in most cases. The creator made the gold, and deposited in the Earth, the people pulled it out of the ground, and the elders held it in trust—at least this is the foundation for the Collateral Accounts in law. But I think it is safe to say at this point that the elders haven't held up their end of the bargain.

Crayford's statements suggest that God is the executor, and certain intermediaries on Earth were entrusted with the wealth to uplift humanity, to actually do God's will—which is in harmony with a trust structure in law. But since, in most cases, these same intermediaries to God are also intimately connected to the Cabal, such as the Vatican, what makes them anymore trusted than your average human being? Are not these people who claim powers over the Collateral Accounts human as well?

These so-called elders were responsible for helping humanity climb out of darkness, but instead, there are more institutions on Earth that promote ignorance and dependency than arguably any other time in history. The very beings who were responsible for assisting humanity have enslaved it by promoting ignorance and dumbing down the people. And then these same people point to humanity's current state as proof we can't be trusted—this sounds like a con job.

Simply put, Crayford's statements sound like a good excuse to maintain the status quo, and further the paradigm of illusory authority which has ravaged the planet for eons. Those he represents get to enjoy power while holding up their hands to say humanity hasn't got its act together.

Of course, there are probably elements I am not aware of, but I wanted to offer some frank commentary on the overarching basis of Crayford's position.

Note: This is a follow-up to the previous post of a discussion between Benjamin Fulford and David Crayford. I suggest you read it first for context, if you have not done so all ready, before continuing below.

I am referring to a section (Refer below) of Fulford’s latest article which is totally incorrect and needs correction to prevent misrepresenting facts to the public.

Since Henry Kissinger’s fraudulent hijacking of the dollar system has ended, as far as we can tell there are two current claimants for the position of M1, or controller of the US dollar system. One is Neil Keenan and the other is believed to be the eldest surviving son of former Philippine president Ferdinand Marcos who now lives in Canada and is represented by a David P. Crayford. If either of them can pull it off, we suggest they conjure up some dollars and take delivery of the gold. It is a good deal: solid gold in exchange for paper and numbers in computers. If neither of them can pull it off, we suggest that General Joseph Dunford step in and arrange this deal.
— Benjamin Fulford, May 9th, 2016

There are NO current claims for the M1 position, as claimed by Fulford. That position is already held by the existing International Treasury Controller, and cannot be held by anyone else, nor can it be just handed around like a piece of bread.
I can categorically state that I do not represent the so-called eldest surviving son of Ferdinand Marcos, as claimed by Fulford. I represent, as Legal Advisor / Consultant, the International Treasury Controller who is the current M1.
I am aware of the eldest surviving son of Marcos who was Marcos’s heir successor, not his heir to the position of M1, but he got fed up with all the serious threats he was receiving and passed everything, by legal document, over to Dr Ray C. Dam who was the International Treasury Controller at the time.
The M1 position was passed down by Marcos, by legal Deed, to another, a highly respected Royal Family member, on December 20th 1988, which was subsequently passed down by legal deed to the International Treasury Controller, formerly Dr Ray C. Dam and now the new International Treasury Controller, both being descendants of Royal Families.
It can only be passed down in succession, by an existing M1 complete with all the correct legal documents, and the Alpha – Omega Ring, for which I am fully aware of where that Alpha – Omega ring currently resides
That is how it currently is and that is how it will remain, because the new International Treasury Controller has no intention of retiring or resigning his position at any time now or in the future.
As for Neil Keenan claiming the position of M1, that is real BS, because I am aware he is already “Blacklisted” as a criminal, reference to his own criminal activities of attempted fraud and theft of Collateral Account Assets and his activities and involvement with known criminals Yamaguchi and Watanabe who each received prison sentences in their absence for criminal activities in Italy, for :-
Related Neil Keenan Update | Obama Out / Cabal Surrender / Currency Revaluation In Progress [?] Brief Commentary by Justin
a). Being in possession of Banking Instruments that were proclaimed fake, which were discovered in a secret compartment of Yamaguchi’s briefcase
b). Attempting to cross National Borders carrying Banking Instruments to be used in attempted fraud and fraudulent deception.
Crossing National Borders in Europe, carrying any form of Banking Instrument, legitimate or otherwise, is a criminal offence in Europe.
So you have got this totally wrong Fulford and you are propagating absolute BS and misinformation. You have no idea of what is involved with the M1 position or its succession line.
I think you believe that you can just walk into a shop and buy it, just like the International Treasury Controller’s position, off the shelf.
How some people dream these things up just completely amazes and astonishes me.
Regards
David Crayford
Source: Rumor Mill News

OUT OF MIND » SUPER SCAMMERS!! RV & DINARIAN FRAUDS & THOSE THAT BUST THEM OUT! » BENJAMIN bla bla bla FULFORD » The David Crayford Discussion Continues… Benjamin Fulford, the Collateral Accounts, and Who Owns the Gold