Nephilim the builders of the huge megalithic stone walls in Sacsayjuman, Peru

Nephilim the builders of the huge megalithic stone walls in Sacsayjuman, Peru Tue May 17, 2016 12:15 am

Nephilim the builders of the huge megalithic stone walls in Sacsayjuman, Peru

We know from the Geneis 6 account the the fallen angels took wives from whoever they chose and the result of that unholy union was the hybrid creature known as the Nephilim. 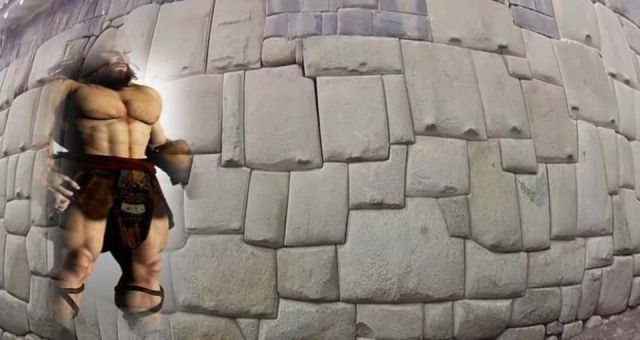 The text tells us very plainly that there were giants in the earth in those days and also afterward when the sons of god - in Hebrew the B’nae ha Elohim, or the angels of heaven - left their first estate and did the unthinkable…. mated with human women. One of the markers of this unholy union was giantism.

L. A. Marzulli’s hypothesis is this. That 3500 years ago when Joshua and Caleb began to take possession of the Promised land. We are told in the passage that the Nephilim were there, the sons of Anak.

We have to come to grips with the Biblical narrative that tells us the Most High God gave a mandate to Joshua and Caleb, to wipe our every man woman and child and to kill all the animals and then to burn everything.

Richard Dawkins, who is one of the premier evolutionists of the 21st Century uses this passage to point to the God of the Bible as being a genocidal, maniacal, capricious and murderous god. Of course we know that He is a God of Love, but many folks when they to this passage wonder what is going on.

The moment we plug the Nephilm into the equation everything changes. We begin to grasp that the Fallen Angels have deliberately set them there in the promised land, because they know The Most High God wants that property for himself.

There are many different Nephilim tribes that we read about. The Nephilim, Raphaiam, Zamzumim’s, Emim’s, Anakim, which by the way is translated Long Necks.

It is Marzulli’s contention that the reason why there are so many different tribes is because of what he believes was genetic manipulation by the Fallen Angels to create man in their image and thwart the plan of the Most High God for redemption.

When Joshua and Caleb pressed into the Holy land Marzulli posits that there was a diaspora of these Nephilim tribes and some fled northward into what is now Europe while others built boats and headed out the Mediterranean and touched the new world.

There are stories of giant skeletons being found throughout the Americas. Are these the vestiges of the Nephilim tribes.

Do we really think the large megalithic stones we find in Sacsayjuman, Peru, are not enigmatic? These gargantuan megaliths are seamlessly put together without the use of mortar, a technique which is called Ashlar Contraction.

When The conquistadors asked the Inca about the walls we see at Sacsayjuaman, the Inca told them the Giants had built it.

What if the builders of these sites, which show advanced engineering, mathematics, construction techniques and a knowledge of the solar alignments such as the summer and winter solstices or the Vernal and Autumnal equinoxes, were not human beings, but part of the fallen angelic host who came here because they wanted to be worshipped as gods?

Journey with us and see for yourself what Marzulli and Brien Foerster discovered in Peru.