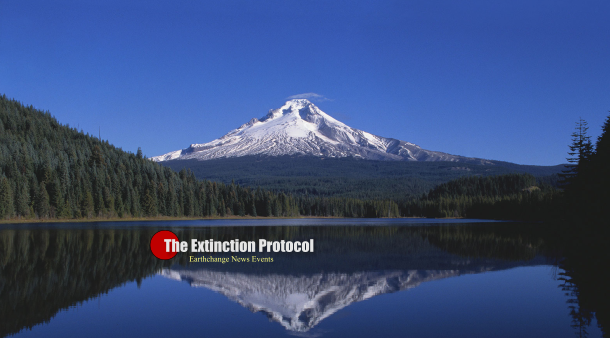 May 2016 – OREGON – As of 1 p.m. Monday, Oregon’s Mount Hood has seen about 40 earthquakes in close proximity over less than 18 hours.  Such clusters of earthquakes are known as a swarm. The location of the quakes is on the southern flank of the volcano, and they are small, magnitude 2.0 or less. Alicia Hotovec-Ellis is a volcano seismologist at the Pacific Northwest Seismic Network at the University of Washington and an expert on earthquake swarms. She says the swarms have happened in the same place before.  The quakes on Mount Hood are not seen as a warning of an eruption and are probably related to water moving through rock.
Swarms of small quakes are used as a tool by scientists to monitor what’s going on deep inside a volcano.  Mount St. Helens has seen a series of swarms involving more than 100 key quakes over the past two months, part of a larger pattern of swarm activity dating back to the late 1990s. Mount St. Helens last erupted in 2004. “The style of earthquakes and where they’re locating is consistent with what we’re calling re-charge,” said Seth Moran of the Cascades Volcano Observatory. But he hastens to add that the next eruption is likely years, if not decades, away. –King 5

May 2016 – JAPAN – A magnitude-5.5 earthquake hit the Kanto region Monday evening, shaking northern Ibaraki Prefecture with an intensity of lower 5 on the Japanese scale and 4 in wide areas in the region, the Meteorological Agency said. No tsunami warning was issued. The focus of the 9:23 p.m. quake was in southern Ibaraki Prefecture, and its depth was estimated at around 42 km, the agency said. In Ibaraki’s central city of Omitama, it registered lower 5 on the Japanese seismic scale to 7, indicating shaking strong enough to frighten many people and make them feel the need to hold onto something stable. The temblor swayed buildings in the metropolitan area.
An 8-year-old boy in Tsukuba broke his left elbow when he dived out of bed out of surprise at the shaking, local firefighters said. Although bullet trains and some other lines were temporarily halted, services were quickly resumed, railway officials said. No damage was reported at airports, officials said. Nuclear power stations in Ibaraki observed no abnormalities, their operators said. The earthquake also shook Tsukuba, Ibaraki Prefecture, where science and technology ministers from the Group of Seven nations are meeting.
Residents of areas that experienced strong shaking should prepare for further quakes as high as 4 on the seismic scale over the next two or three days, the Meteorological Agency said at a press conference shortly before midnight. The quake came a month after two strong earthquakes struck Kumamoto Prefecture, leaving dozens of people dead and destroying many houses. –Japan Times