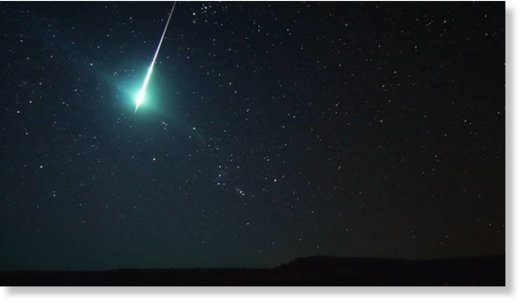 
A fiery meteor-bright enough to be classified as a fireball-came crashing into the atmosphere over Goldendale on June 3, only a day after a similar fireball lit up the sky near Phoenix, Ariz.
Seventeen reports of sighting of the meteor came from Washington and Oregon residents posted on the American Meteor Society’s webpage. The fireball, which is a meteor that is brighter than the planet Venus, blazed across the sky from west to east for over four seconds, according to many reports. The fireball was yellow and orange in color, and developed a green ionization trail as it entered the earth’s atmosphere. Unfortunately, the lack of video capture of the event has yielded minimal publicity. Apparently the exploding Arizona asteroid was given more light.
On June 2 at about 4 a.m. local time, an asteroid estimated to be five feet in diameter and weighing as much as a few tons, entered the earth’s atmosphere over Phoenix. This asteroid, traveling at about 40,000 miles per hour, flew just 22 miles above the Tonto National Forest, as estimated by NASA. Many local security cameras caught the bright, exploding asteroid that lit up 10 times brighter than a full moon. There were a few sonic booms due to the asteroid traveling through the air faster than the speed of sound. Fortunately, no injuries were reported. Though the meteor was relatively small, the amount of meteorites that successfully land on the ground can be determined by the brightness of the flash, meaning there are potentially meteorites scattered north of Tucson. (The one over Goldendale may have come to earth as far away as Montana.) Larger meteors have a greater chance of staying intact, while smaller ones tend to burn up entirely upon entering the atmosphere.
Though these asteroids can be quite common, this was the brightest fireball detected by NASA in eight years. NASA’s Planetary Defense finds and tracks near-Earth asteroids and has discovered over 14,000 since 1998. As much as 100 tons of space rock and dust fall to earth each day.