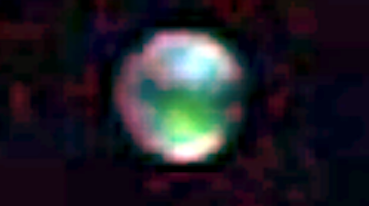 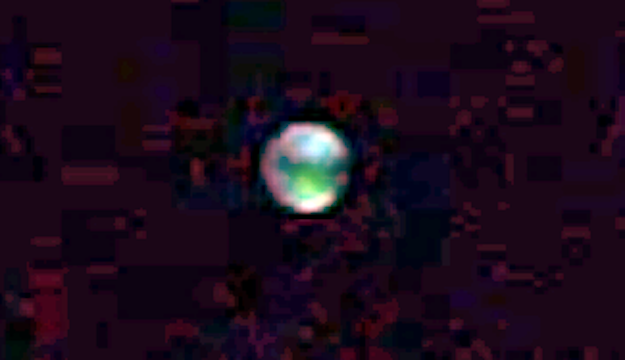 Original below, added light altered above. 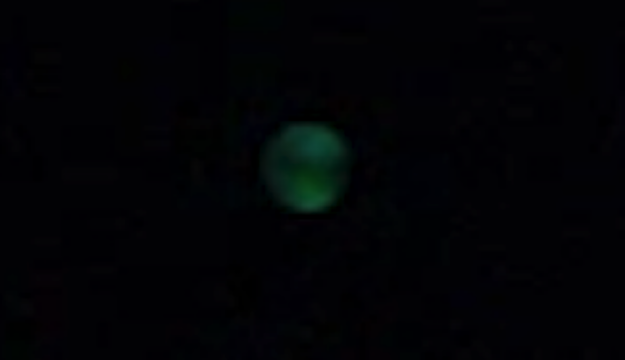 Guys, this UFO is just beautiful. When I added light to the photo, it really made the colors stand out. The green and the pink boarder are really memorizing. Christchurch is famous for its UFO sightings, and this is the best, most clearest that they have ever presented to us. This could be a UFO with an occupant, or it may be a remote drone, that allows the alien light years away to experience most senses through it...sight, sound, smell...maybe not feeling objects, but drones like that must come closer to gather such info.

Sorry for the video below, its not on Youtube and I tried to make it bigger, but its still tiny.
Scott C. Waring
www.ufosightingsdaily.com

News states:
A brightly coloured sphere filmed in the night sky near Christchurch this week joins a tradition, of mysterious objects seen in Kiwi skies, stretching back at least a century. Oisin Lavelle reported seeing and filming one sphere on Monday night and seeing three on Tuesday night. He watched the Monday night sphere for two hours before it sped away amid bursts of bright orange light. 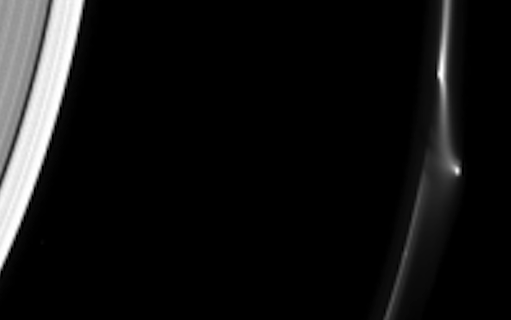 Date of discovery: April 8, 2016
Location of discovery: Saturn's Rings
Photo source: http://www.nasa.gov/image-feature/jpl/pia20485/not-guilty
NASA says its an object that was sitting in the ring and then was dislodged, I agee with that. It looks like a UFO was laying dormant in the ring and was suddenly turned on and shot out to do its job. This UFO was probably a drone, since the UFO may have been hiding there for an infinite amount of years.

Of course there are some dormant ships that have a living human-like pilot...for instance the Apollo 20 mission ship in Deporte crater on Earths moon. The pilot (a woman) had a third eye on her forehead and was attached to the pilot controls with an umbilical cord-like tubes. This woman was recovered by the astronauts, taken back to earth...all the time she was said to be in a stasis, not alive...not dead. I asked William Rutledge on Youtube  (RetiredAFB) for more info (he was an astronaut on the mission), but his account was hacked, videos mostly deleted, and at about 80 years old, decided to give up trying to teach the world about what he saw. He did leave a message I read saying "congratulations to the ones hacking my account, you have great hacking skills." or something like that. That was the last we ever heard of William 8 years ago.
Scott C. Waring
www.ufosightingsdaily.com
NASA States:
A bright disruption in Saturn's narrow F ring suggests it may have been disturbed recently. This feature was mostly likely not caused by Pandora (50 miles or 81 kilometers across) which lurks nearby, at lower right. More likely, it was created by the interaction of a small object embedded in the ring itself and material in the core of the ring. Scientists sometimes refer to these features as "jets." Because these bodies are small and embedded in the F ring itself, they are difficult to spot at the resolution available to NASA's Cassini spacecraft. Instead, their handiwork reveals their presence, and scientists use the Cassini spacecraft to study these stealthy sculptors of the F ring. This view looks toward the sunlit side of the rings from about 15 above the ring plane. The image was taken in visible light with the Cassini spacecraft narrow-angle camera on April 8, 2016. The view was acquired at a distance of approximately 1.4 million miles (2.2 million kilometers) from Saturn and at a Sun-Saturn-spacecraft, or phase, angle of 105 degrees. Image scale is 8 miles (13 kilometers) per pixel. The Cassini mission is a cooperative project of NASA, ESA (the European Space Agency) and the Italian Space Agency. The Jet Propulsion Laboratory, a division of the California Institute of Technology in Pasadena, manages the mission for NASA's Science Mission Directorate, Washington. The Cassini orbiter and its two onboard cameras were designed, developed and assembled at JPL. The imaging operations center is based at the Space Science Institute in Boulder, Colorado. 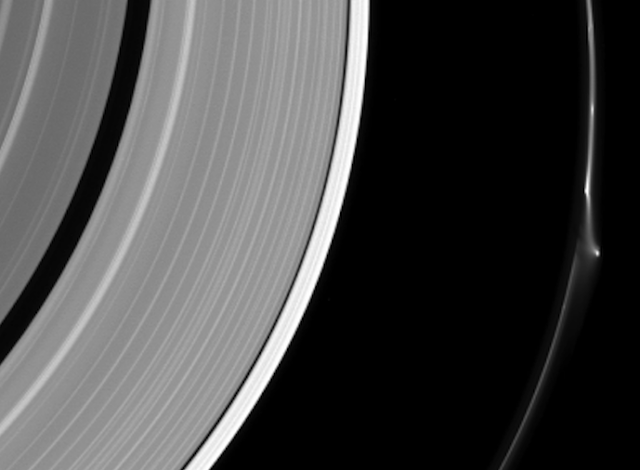 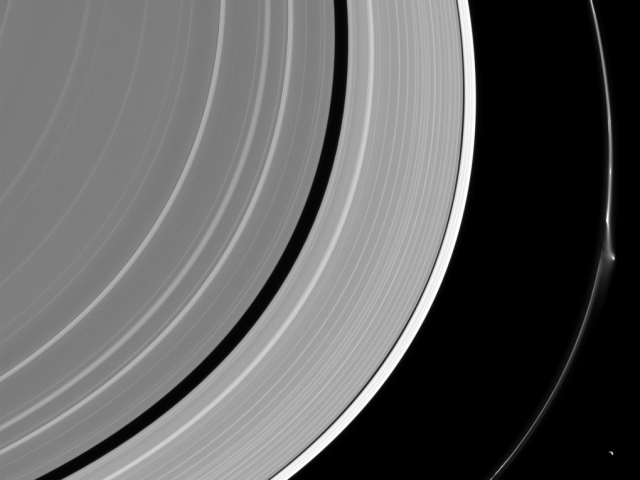 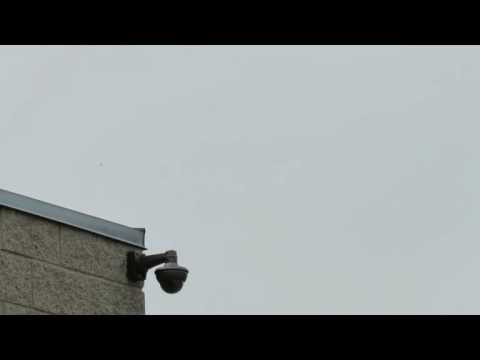 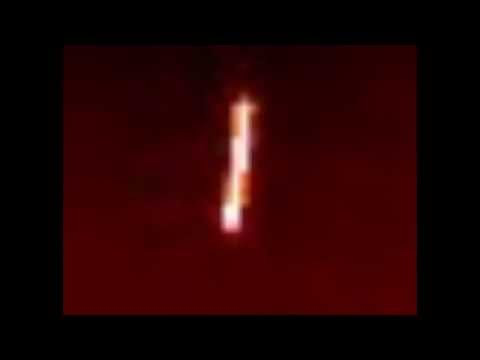 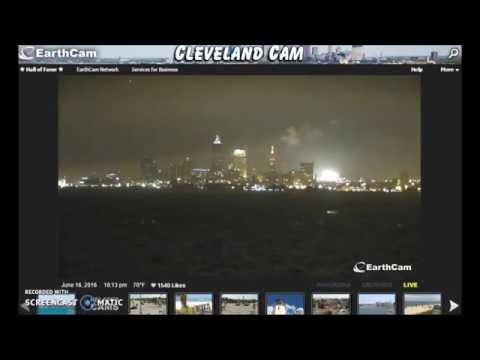 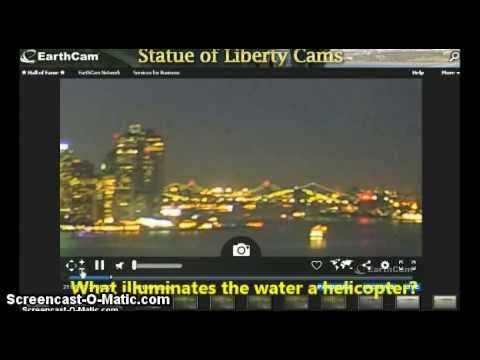 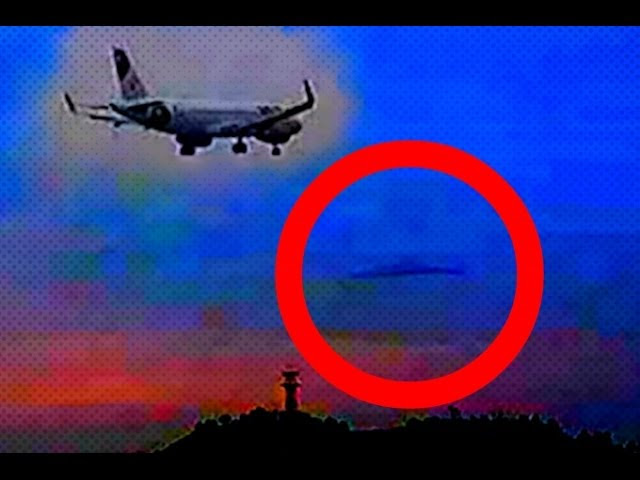 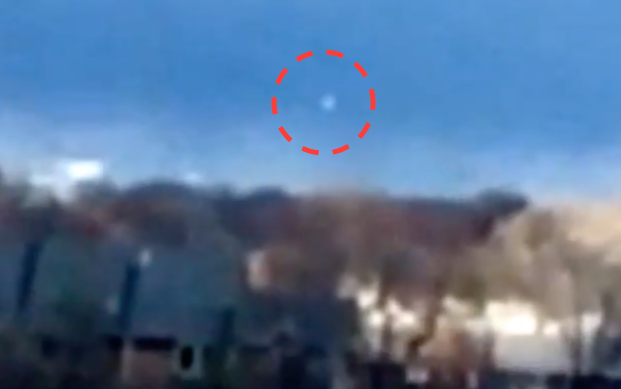 Here is a cool video by Secureteam10 of Youtube. It shows not one, but a handful of white UFOs shooing around the sky over Massachusetts this week. To see it you really need to make it full screen. I've seen this before over Notre Dame stadium long ago when lightning struck the stadium...small white UFOs shot all around, sucking in the static electricity in the air, due to the storm.

SecureTeam10 States:
Secureteam10 is your source for reporting the best in new UFO sighting news, information on the government coverup, and the alien activity happening on and off of our planet. Send us YOUR footage by visiting the contact links below, and help us continue the good fight for disclosure!