OUT OF MIND » THE INSANITY OF REALITY » GOVERNMENTS & THE NEW WORLD ORDER » Clinton Foundation hacked, here are the documents…

Moments ago the newswires lit up with news that the Clinton Foundation was among the organizations breached by suspected Russian hackers (was actually Romanian) in a dragnet of the U.S. political apparatus ahead of the Nov. election, Bloomberg reports.
As Bloomberg adds, the attacks on the foundation’s network, as well as those of the Democratic Party and Hillary Clinton’s presidential campaign, compound concerns about her digital security even as the FBI continues to investigate her use of a personal e-mail server while she was secretary of state.
A spokesman for the foundation, Brian Cookstra, said he wasn’t aware of any breach. The compromise of the foundation’s computers was first identified by government investigators as recently as last week, the people familiar with the matter said. Agents monitor servers used by hackers to communicate with their targets, giving them a back channel view of attacks, often even before the victims detect them.
That’s the official version, and one which accurately focuses on the porous security at both the DNC and Clinton Foundation servers.
What really happened is that earlier today, the infamous hacker Guccifer 2.0 – who as we reported previously, revealed himself as the individual who penetrated the DNC server (which was also blamed on Russian hackers) and revealed to the world the DNC’s “attack files” on Donald Trump, among others, including the Clinton mega donors – released another data dump which he titled as the “Dossier on Hillary Clinton from DNC.”
In the post he says the following:
“This’s time to keep my word and here’re the docs I promised you.
It’s not a report in one file, it’s a big folder of docs devoted to Hillary Clinton that I found on the DNC server.
The DNC collected all info about the attacks on Hillary Clinton and
prepared the ways of her defense, memos, etc., including the most
sensitive issues like email hacks.
As an example here’re some files:”
2016er Attacks – HRC Defense Master Doc [updated]
04.29.15 CGEP
2016 Democrats Positions Cheat Sheet 7-7-15
20150426 MEMO- Clinton Cash Unravels
Attacks on Clinton Family Members
Clinton Foundation Donors $25K+
Clinton Foundation Vulnerabilities Master Doc FINAL
Clintons PFD 2015
HRC Defense – Emails
HRC Travel – Private Jets FINAL
MEMO — Clinton Cash Claims (2)
Most notable among these files is the file called “Clinton Foundation Vulnerabilities Master Doc FINAL” which, as the title implies, is an extensive 42-page summary of how the Clinton Foundation views its biggest vulnerabilities based on mentions, references and attacks from the press.
Here are some of the section titles:

There is much more in the full document presented below (link).
* * *
One important thing to note: according to an interview that Motherboard conducted with Guccifer 2.0 on Tuesday, the hacker makes it clear he is not Russian. He is, in fact, from Romania, just like the Original Guccifer.
“I’m a hacker, manager, philosopher, women lover,” Guccifer 2.0 told Motherboard on Tuesday in a Twitter chat. “I also like Gucci! I bring the light to people. I’m a freedom fighter! So u can choose what u like!”
The hacker, who claimed to have chosen the name in reference to the notorious hacker who leaked the George W. Bush paintings and claims to have hacked Hillary Clinton’s email server, denied working for the Russian government, as several experts believe.
“I don’t like Russians and their foreign policy. I hate being attributed to Russia,” he said, adding that he was from Romania, just like the first Guccifer.
When asked to explain how he hacked into the DNC in Romanian, “he seemed to stall us, and said he didn’t want to “waste” his time doing that. The few short sentences he sent in Romanian were filled with mistakes, according to several Romanian native speakers.”
The hacker said he left Russian metadata in the leaked documents as his personal ”watermark.” He also said he got kicked out of the network on June 12, when the DNC “rebooted their system.”
A senior DNC official said in an emailed statement that “our experts are confident in their assessment that the Russian government hackers were the actors responsible for the breach detected in April, and we believe that the subsequent release and the claims around it may be a part of a disinformation campaign by the Russians.”
Guccifer 2.0 also said the DNC isn’t the only victim of his hacks, but declined to name any others because “my safety depends on it.”
It appears the Clinton Foundation was one of the other hacks. 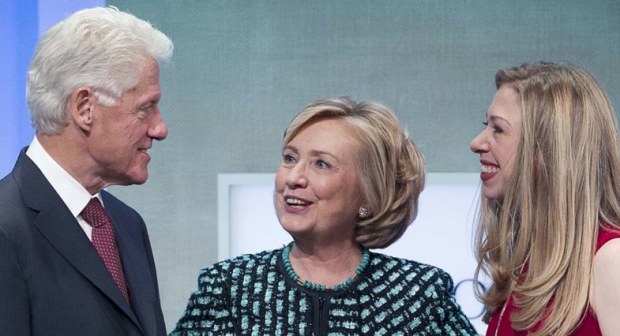 Seasoned criminals and career politicians: the Clinton’s.
Finally, when asked why he targeted the DNC, “Guccifer 2.0 said he simply did it to follow the lead of Marcel Lazar, the original Guccifer, and that he doesn’t “care at all” about Donald Trump. The hacker declined to say whether he knew him personally, “cause I care for Marcel.” “I think we must fight for freedom of minds,” he wrote. “Fight for the world without Illuminati.”
Good luck.
* * *
So while we are going through the full data dump (found here), here is the leaked document revealing the “Clinton Foundation’s Vulnerabilities.”
SEE ALSO:
– The Clintons and their banker friends
– Wikileaks will publish ‘enough evidence’ to indict Hillary Clinton
– Rothschild’s hold $100,000 per head fundraiser for Hillary Clinton
– Clinton emails: Google plotted to overthrow Assad in Syria
– Google manipulating search results to favour Hillary Clinton?
SOURCE

OUT OF MIND » THE INSANITY OF REALITY » GOVERNMENTS & THE NEW WORLD ORDER » Clinton Foundation hacked, here are the documents…