SolarReserve’s Crescent Dunes Project in Tonopah, Nevada is quietly providing clean, greensolar energy to 75,000 homes in the Silver State even when the sun isn’t shining. 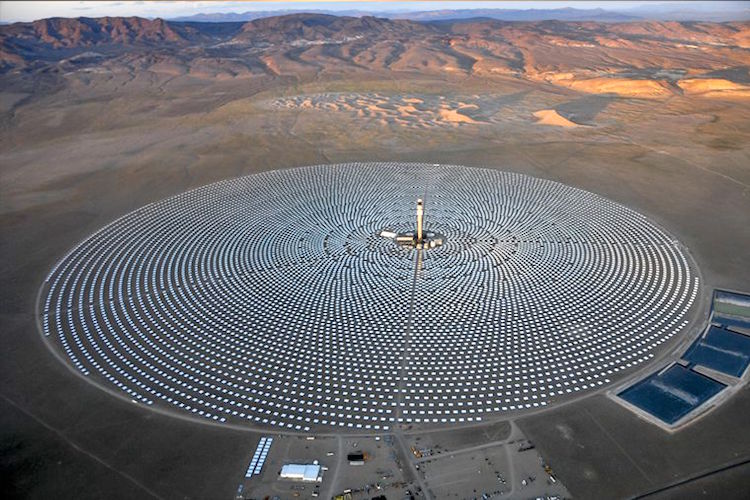 This salt is used for two purposes, as SolarReserve points out on its website. First, it retains very high levels of heat, making it like a thermal battery that can be used night and day, whether or not the sun is out. Second, when electricity is needed on the grid, the molten salt gets dispatched through a heat exchanger to create super-heated steam to power a traditional steam turbine.
This process is similar to a conventional fossil fuel or nuclear power plant except with zero carbon emissions or hazardous waste and without any fuel costs, the California-based solar company says.
“The whole project cost slightly under $1 billion and SolarReserve holds a 25-year contract to supply power to NV Energy for $135 per megawatt hour,” OilPrice.com observed. “The tower produces 110 megawatts of energy for 12 hours a day according to the company, which works out to roughly 1 million megawatts per year. This in turn implies a gross [return on assets] of ~13.5 percent—not bad as investments go.”
The method is different compared to photovoltaic technology, which harnesses the sun’s rays on panels that convert sunlight into electricity. While photovoltaic arrays have many benefits and the technology has been well-tested and proven, its biggest problem is when the sun is not out.
As EcoWatch mentioned previously , a solar system’s peak generation hours do not coincide with the utility’s peak load hours after 5 p.m., meaning power companies turn to high-carbon peaking turbines in the evenings, thus decreasing the environmental benefits of solar panels. 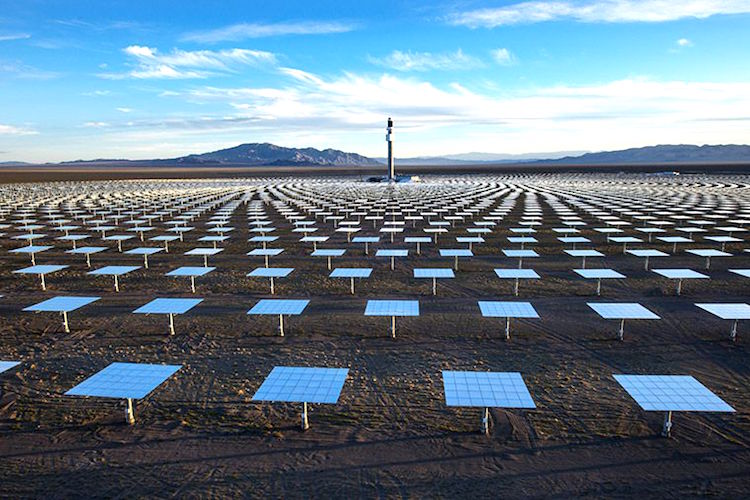 The facility will generate solar power for 75,000 homes in Nevada during peak demand periods, day and night. Photo credit: SolarReserve
“The plant is noteworthy for what it accomplishes—it is the first truly 24-7 solar plant in the world. For many applications that is a very big deal,” OilPrice.com adds about the Crescent Dunes project. “Having to build a second power plant to back up a solar array is not an ideal solution to say the least. Thermal solar resolves that issue all while letting facilities like SolarReserve’s store 1,100 megawatt-hours of energy.”
Residential or grid-scale battery systems, such as the ones manufactured  by Tesla, are an another emerging solution to solar storage issues but the technology is relatively new.
Solar thermal plants are setting up in sun-spoiled deserts around the world. The Ivanpah Solar Electric Generating System in the California Mojave Desert is the largest concentrated solar plant in the U.S., spanning 3,500 acres and has 377 megawatts of net generating capacity. The facility, however, is experiencing widely reported “engineering hiccups ,” including a fire that broke out in May.
Dubai’s massive Mohammed bin Rashid Al Maktoum Solar Park is another notable concentrated solar plant that will hold the distinction of being the world’s largest once it’s operational in April 2017. The facility aims to produce 1,000 megawatts by 2020 and 5,000 megawatts by 2030. The solar park also broke the record of having the world’s cheapest solar on May 1 when five international companies bid as little as 2.99 cents per kilowatt-hour to develop the plant’s latest phase of work.
Besides Crescent Dunes, SolarReserve is developing two other concentrated solar plants. The venture is building the Redstone Solar Thermal Power Project in the town of Postmasburg in South Africa, which will be the first concentrated solar plant in Africa. The other is the Copiapó Solar Energy Project in Chile which will combine both concentrated solar and photovoltaics, making it the first facility of its kind in the South American country.
I wanted to share something with you. I want you to check out Earth Children page on Facebook . Earth Children are a company raising awareness on environmental issues, wellness, sustainable and eco friendly living, organic gardening and revolutionising our way of interacting with the planet. Please like their page to stay updated, their website is launching soon: