OUT OF MIND » TRUTH IN CONSPIRACY THEORIES? » HISTORIES MYSTERIES » Why Are These 32 Symbols Found In Ancient Caves All Over Europe?

Why Are These 32 Symbols Found In Ancient Caves All Over Europe? 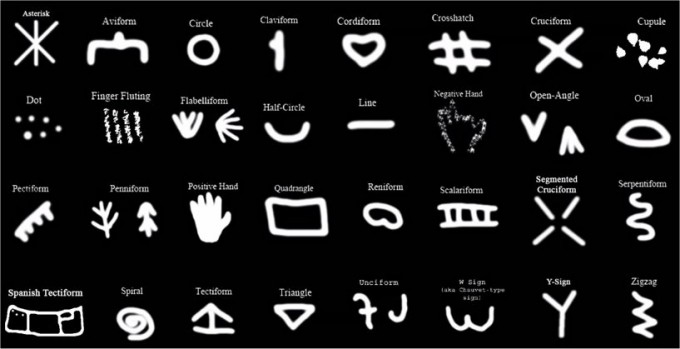 Why Are These 32 Symbols Found In Ancient Caves All Over Europe?
July 2, 2016


Written language, the hallmark of human civilization, didn’t just suddenly appear one day.
Thousands of years before the first fully developed writing systems, our ancestors scrawled geometric signs across the walls of the caves they sheltered in.
Paleoanthropologist and rock art researcher Genevieve von Petzinger has studied and codified these ancient markings in caves across Europe.
The uniformity of her findings suggest that graphic communication, and the ability to preserve and transmit messages beyond a single moment in time, may be much older than we think.
Look for her latest book about this amazing period of human prehistory entitled, The First Signs: Unlocking the Mysteries of the World’s Oldest Symbols.
In the below TED Talk, von Petzinger talks about the evolution of written language. After all, it did not just appear one day, but rather was developed in a prolonged period via the geometric signs in cave art. She has codified these markings, finding a uniformity which suggests that written language might be older than previously thought.

OUT OF MIND » TRUTH IN CONSPIRACY THEORIES? » HISTORIES MYSTERIES » Why Are These 32 Symbols Found In Ancient Caves All Over Europe?

» "Golden Library" Found In Caves Built By Giants?
» Largest Pyramid In Europe Found In The UK?
» The mysterious caves of Hua Shan
» Europe’s oldest prehistoric town found in Bulgaria
» The Mythical Caves Beneath the Himalayas