Salute to the Sun ~ Benefits of Surya Namaskar Yoga

Admin
Posts : 102850
Join date : 2012-01-04
Location : Woodstock Nation
Salute to the Sun
Benefits of Surya Namaskar: How It Transforms Your System

The benefits of Surya Namaskar and Hatha Yoga can be maximized by following a few simple steps during practice. In this post, Sadhguru looks at the surprising role water and sweat play in sadhana. 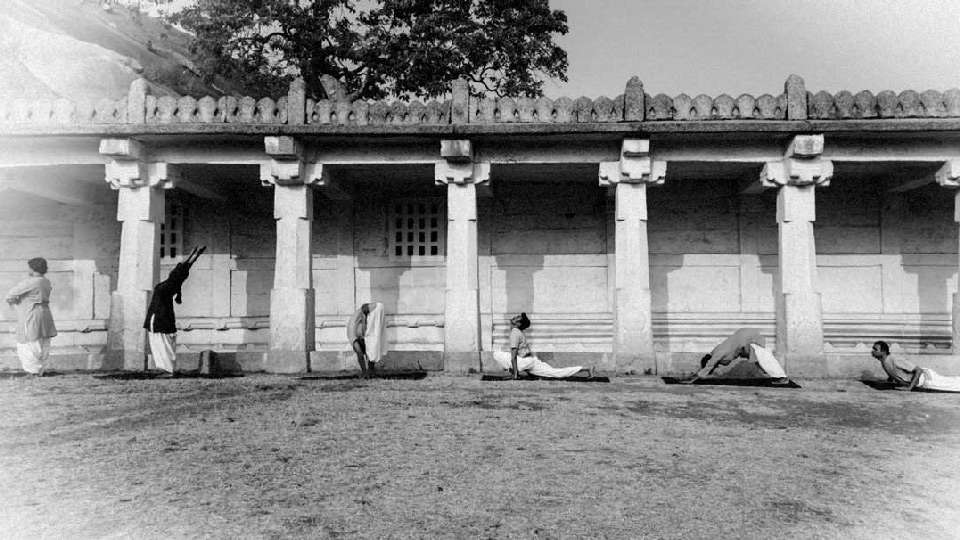 Sadhguru looks at the impact of Surya Namaskar on the human system, and presents a few simple steps that can maximize its benefits.
Read in Hindi : सूर्य नमस्कार

Sadhguru: Generally, people understand Surya Namaskar as an exercise: it strengthens your back, your muscles, etc. Yes, it definitely does do all that and more. It is quite a complete workout for the physical system – a comprehensive exercise form without any need for equipment. But above all, it is an important tool that empowers human beings to break free from the compulsive cycles and patterns of their lives.

Surya Namaskar means to bow down to the sun in the morning. The sun is the life source for this planet. In everything that you eat, drink and breathe, there is an element of the sun. Only if you learn how to better “digest” the sun, internalize it, and make it a part of your system, do you truly benefit from this process.

The physical body is a fantastic stepping-stone for higher possibilities, but for most people it functions like a road block. The compulsions of the body do not allow them to go forward. Being in sync with the solar cycle is an important part of balance and receptivity, a means of taking the body to the point where it is no longer a hurdle. 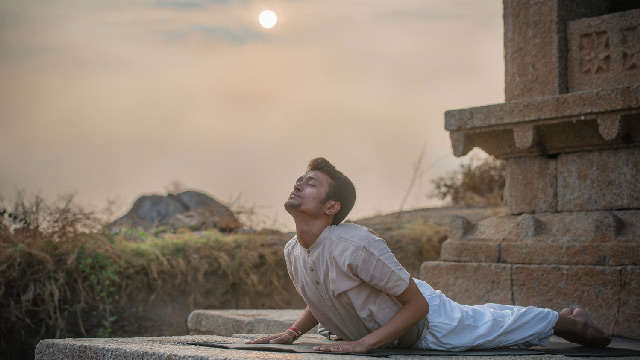 Surya Namaskar, which is known as “Sun Salutation” in English, is essentially about building a dimension within you where your physical cycles are in sync with the sun’s cycles, which run at about twelve-and-a-quarter years. It is not by accident but by intent that it has been structured with twelve postures or twelve asanas in it. If your system is in a certain level of vibrancy and readiness, and in a good state of receptivity, then naturally your cycle will be in sync with the solar cycle.

Young women have an advantage in that they are also in sync with the lunar cycles. It is a fantastic possibility that your body is both connected to the solar cycle and to the lunar cycle. Nature has granted this advantage to a woman because she has been entrusted with the extra responsibility of propagating the human race. So she has been given some extra privileges. But many people don’t know how to handle the extra energy that is generated by that relationship and so they treat it as a curse and even a kind of madness, as evidenced by the word “lunar” turning into “loony.” 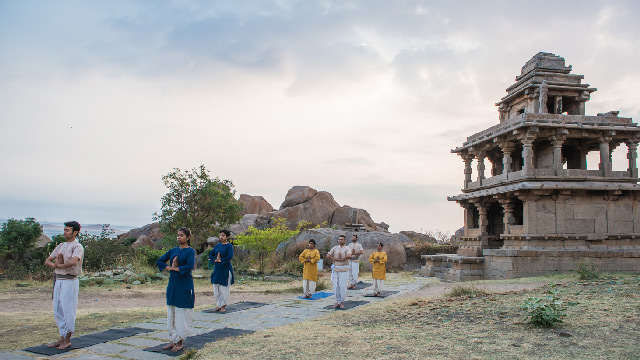 Using cycles to go beyond the cyclical

Between the lunar cycle, which is the shortest cycle (a 28-day cycle) and the cycle of the sun, which is over twelve years, there are many other kinds of cycles. The word “cyclical” denotes repetition. Repetition means that in some way it is compulsive. Compulsiveness means it is not conducive for consciousness. If you are very compulsive, you will see that situations, experiences, thoughts and emotions will be cyclical. They keep coming back to you once in six months or eighteen months, three years or six years. If you just look back and see, you will notice this. If they come once in over twelve years, that means your system is in a good state of receptivity and balance. Surya Namaskar is an important process to enable that to happen. The sadhana is always to break the cycle so that there is no more compulsiveness, and you have the right kind of foundation for consciousness.

The physical body is a fantastic stepping-stone for higher possibilities, but for most people it functions like a road block

The repetitive nature of cyclical movements or systems, which we traditionally refer to as samsara, is the necessary stability for the making of life. If it was all at random, it would not be possible to house a steady life-making machine. So, for the solar system and for the individual person, being rooted in cyclic nature is the firmness and steadiness of life. But once life has reached the level of evolution that human beings have reached, it is natural to aspire not just for stability, but for transcendence. Now, it is left to individual human beings either to remain trapped in the cyclical, which is the basis of stable physical existence, or to use these cycles for physical wellbeing and ride them and go beyond the cyclical.

Maximizing the Benefits of Surya Namaskar

Hatha yoga is about creating a body that will not be a hurdle in your life but a stepping stone towards blossoming into your ultimate possibility. There are a few simple things you can do to prepare your body and get the most out of your practice.

  Bathe in cool water to charge the cellular structure

Before starting your practice, take a shower or a bath using water that is a little cooler than room temperature. If a certain volume of water flows over your body, or your body is immersed in water that is cooler than room temperature, the epithelial cells will contract and the intercellular spaces will expand. If you use warm or hot water, the pores of the cells will open up and absorb water – that is not what we want. For the practice of yoga, it is important that the cells contract and the intercellular spaces open up, because we want the cellular structure of the body to be charged with a different dimension of energy. If the cells contract and allow space in between, practicing yoga will charge the cellular structure.

Why some people seem to be far more alive than others is essentially because their cellular structure is more charged. When it is charged with energy, it will remain youthful for a very long time. Hatha yoga is a way to do that. In South India, tap water is generally just a little cooler than room temperature. If you are in a temperate climate, the regular tap water may be too cold. Three to five degrees centigrade below room temperature would be ideal. A maximum of ten degrees centigrade below room temperature would be acceptable – the water should not be colder than that. 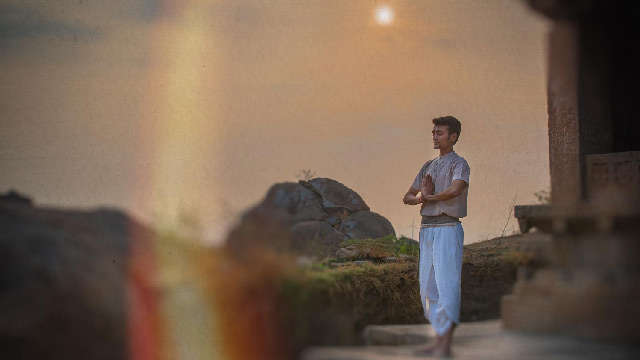   Rub sweat into the skin to retain energy

Whether you practice asanas, Surya Namaskar or Surya Kriya – if you start sweating, do not wipe off the sweat with a towel – always rub it back, at least into the exposed parts of your skin. If you wipe off the sweat, you drain the energy that you have generated with the practice. Water has the capability to carry memory and energy. That is why you should not wipe off sweat with a towel, drink water, or go to the bathroom during practice time, unless there is a special situation that makes it absolutely necessary.

And, after practicing yoga, wait a minimum of 1.5 hours before taking a shower – three hours would be even better. Sweating and not showering for two to three hours could be a bit of an olfactory challenge – so just stay away from others!

  Learn to consume the right amount of water

After practicing yoga, wait a minimum of 1.5 hours before taking a shower
Learn to just drink as much as the body needs. Unless you are in a desert or you have habits that dehydrate you – such as excessive consumption of caffeine and nicotine – there is no need to constantly sip water. About 70% of the body is water. The body knows how to manage itself. If you drink according to your thirst plus an additional 10%, it will be enough. To give an example – if your thirst is gone after two sips of water, drink 10% more. That will take care of your body’s need for water. Only if you are out in the sun or trekking in the mountains, sweating heavily and losing water rapidly, you need to drink more – not when you are doing yoga under a roof.

As I already said, rub back the sweat as much as possible, but you need not do that all the time. It can drip a bit – just don’t use a towel. Push it back because we don’t want to drain energy – we want to build it up.

From Surya Namaskar to Surya Kriya

Isha Editor’s Note: Isha Hatha Yoga offers classical yoga in its full depth and dimension. Find a teacher near you to sign up for the programs offered.