OUT OF MIND » THE INSANITY OF REALITY » GOVERNMENTS & THE NEW WORLD ORDER » I Would Actually Vote if This Was True!!

I Would Actually Vote if This Was True!! 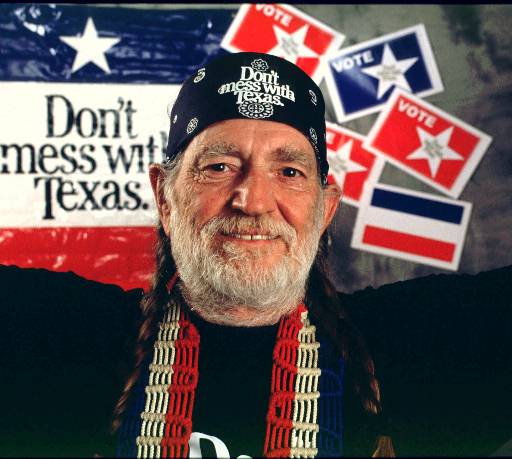 Willie Nelson may be running for President. The music making activist’s merchandise shop has recently added several “Willie For President” items to their inventory. This is only weeks after Nelson’s camp announced they were hiring employees for his up and coming weed brand. The jobs he created while developing the “Willie’s Reserve” marijuana brand, may be one of the achievements Mr. Nelson can boast about if he does indeed run for president. In fact, this isn’t the only part of Nelson’s track record that may be brought to light if he does run.

In 1990, Nelson had his assets seized and found himself deep in debt after making some unwise investments in the 1980’s.

However, only two years later he was able to repay his outstanding $32 million dollar debt after the success of his album The IRS Tapes: Who’ll buy my memories?

Further additions to his credentials include his position as co-chair of the advisory board of the National Organization for the Reform of Marijuana Laws or better known as NORML, which favors the legalization of marijuana in all 50 states and has been one of the leading advocates in the battle for legalization.

NORML has assisted in making marijuana enforcement the lowest priority for many local law enforcers.

This led to the freeing of police resources to combat more violent and dangerous crime. Anyone looking for a presidential candidate with a plan for cannabis reform may be interested in voting for Willie Nelson during the next election cycle.

The man who once rescued his guitar from a burning ranch would likely do more for his fellow man. Nelson is no stranger to charity.

In fact in 2001, following the September 11 attacks, he participated in the benefit telethon leading other celebrities in a sing-along of the song “America the Beautiful.”


Willie Nelson is a patriot and has also been politically active since the 2004 Democratic presidential primaries where he raised money for and appeared at events in support of candidate Dennis Kucinich’s campaign.

Nelson is also a known supporter of the LGBT movement and has written letters against the confinement and mistreatment of animals.

He’s proved himself as an activist who cares about issues that matter, he’s successfully brought himself out of debt which this country could use, and he’s a successful business person.

According to his track record, Nelson might be better qualified for the position of the president than many of the candidates running in during this year’s election. If Trump can get as far as he has, there’s no reason Willie Nelson can’t also compete during the next election cycle. Let’s hope he’s running.

OUT OF MIND » THE INSANITY OF REALITY » GOVERNMENTS & THE NEW WORLD ORDER » I Would Actually Vote if This Was True!!

» A world vote....... Results Which Republican candidate would you vote for?
» Snordster - Left Right, Left Right... Vote.. Vote, VOTE!
» WHY YOUR VOTE DOES NOT MATTER
» Suggestion… Vote with the Light… Vote for the Light…
» Anonymous - Vote Them Out