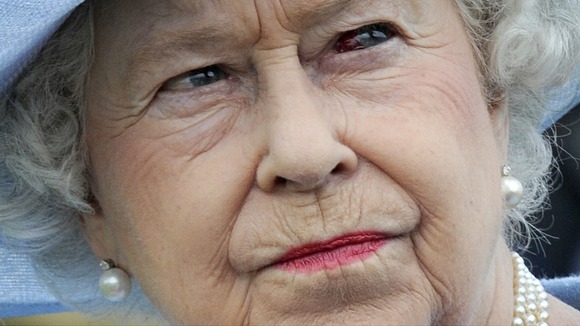 
I keep reading and hearing talk of  “full disclosure” regarding ET’s.  Every day I see a new article, or hear something new from David Wilcock.  I do notice there are more movies and TV series regarding aliens, UFO’s and interacting with them, but why don’t they just get on with it?
Because I am trying to sort out what is real and what is propaganda, I put together a survey asking how who believes in aliens and who believes we will have full disclosure.  The survey was taken by 2360 people.  Here are the results:

Recently, it was reported that an internal document acknowledging that Queen Elizabeth is a shapeshifting reptilian was briefly published as a press release on the Royal Family’s official website before being abruptly taken down – but not before alert internet users captured screenshots of the extraordinary article and proof that the press release did appear on Google. 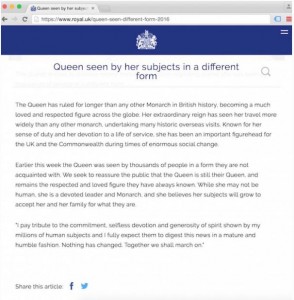 This announcement published on www.Royal.UK leaves one to wonder exactly what was meant by the statement,

“Earlier this week the Queen was seen by thousands of people in a form they are not acquainted with.  We seek to reassure the public that the Queen is still the Queen, and remains the respected and loved figure they have always known.  While she may not be human, she is a devoted leader and Monarch and she believes her subjects will grow to accept her and her family for what they are.”

Wow.  “While she may not be human”…  “she believes her subjects will grow to accept her and her family for what they are…”  What ARE they?  This certainly sounds like an admission of…  something.  Could this be the disclosure we have been waiting for?

British media reports criticized Vladamir Putin during a 2014 visit to the Queen because of his refusal to help the monarch down the stairs and because he generally kept his distance from her.
But, two years later, Putin has revealed why he kept his distance from Queen Elizabeth at the gathering. He told close associates and aides that he was alarmed when the queen showed her true reptilian bloodline colors by shape-shifting a number of times while he greeted her.  He claimed the queen shifted between Reptoid and human form three or four times while meeting with Putin. 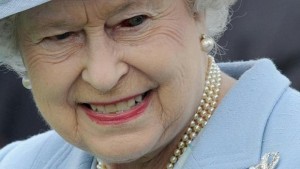 According to Putin, when the queen revealed her underlying Reptilian nature by shape-shifting, her face turned scary, with evil-looking slit eyes and a long dragon-like snout. Her skin also turned a “grey dish water color.”  He also saw the old monarch shape-shifting when Obama and New Zealand’s Governor-General Jerry Mateparae helped her down the stairs. Putin said that when Obama held the queen, her hands turned Reptilian green and scaly, and when she smiled, she revealed sharp and spiky reptilian teeth that glistened evilly.
Putin accused the Queen of shape-shifting repeatedly as a warning “not to mess” with her as the high-priestess of the world-ruling Reptilian-Illuminati clique.

Christine Fitzgerald, a brilliant and gifted healer, who was a close friend and confidant of Diana for nine years was one person to whom Diana told stories of the Queen Mother. Because of Christine’s understanding of the esoteric, Diana was able to talk to her about matters she would not dare to share with anyone else for fear of being called crazy.  Her nicknames for the Windsors were “the lizards” and “the reptiles” and she used to say in all seriousness: “They’re not human”.
Diana told Christine that the Queen Mother was the power behind the Windsors, along with Prince Philip, but, Philip was subordinate in the hierarchy to the Queen.
“Diana used to tell me that the Queen Mother was evil”, Christine Fitzgerald said, “She actually used that word, evil. She said she hated the Queen Mother and the Queen Mother hated her.”
During her time at Clarence House, before the wedding, Diana told Christine she was being given drugs like Valium.  “They drugged her”, Christine said, “I’m sure of it.  They had her doped from the start.”

“The Queen Mother… now that’s a serious piece of wizardry. The Queen Mother is a lot older than people think. To be honest, the Royal Family hasn’t died for a long time, they have just metamorphosised. It’s sort of cloning, but in a different way. They take pieces of flesh and rebuild the body from one little bit. Because it’s lizard, because it’s cold-blooded, it’s much easier for them to do Frankenstein shit than it is for us. The different bodies are just different electrical vibrations and they have got that secret, they’ve got the secret of the micro-currents, it’s so micro, so specific, these radio waves that actually create the bodies. These are the energies I work with when I’m healing…”

She also commented, “The Queen Mother is ‘Chief Toad’ of this part of Europe and they have people like her in each continent. Most people, the hangers on, don’t know, you know, about the reptiles. They are just in awe of these people because they are so powerful.“
Christine went on to say, “Balmoral, [the Queen’s Scottish residence] is a very, very nasty place. That’s somewhere they want to dig underground. They will find reptile fossils, it goes back that far. Don’t think of people like the Queen Mother and Queen Victoria, as different people. Think of them as the same person, which, after a while has had to replace their coat. When the flesh dies, that energy, while it’s dying, will be immediately up someone else’s jacksy backside). It’s very vampire- worse than vampire!” 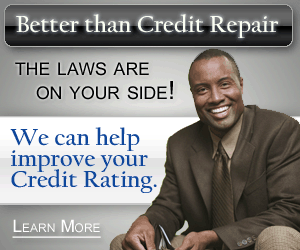 Christine also explains that fear is their food.  The Queen Mother and others like her can actually take fear and manifest it into a tangible things.  The key is the vibrational current.  “At that vibrational current, they can manifest anything from anything. Its like a holographic image. We are all minerals and water vibrating. This is all an illusion we are living in. That’s the secret. You know when the monarchy’s fallen, it’s not the end of it. They will manifest in another form. The reptiles have never been defeated and this is the closest they have come to it.”

One witness attended what she refers to as a ritual called The Awakening of the Bride atthe Queen Mother’s home near Buckingham Palace with Diana.  The ritual took place the first part of July in 1981, before Diana and Charles were married.  The ritual took place the last seven days of the cycle of the Oak Tree, according to esoteric law.  The ritual is for all females of the 13 bloodlines who were going to be in high public positions and marry reptilians to produce the new generation of rulers.  Many of the royal family were present for this ritual, as was Camilla Parker-Bowles.
Diana was brought in wearing a white gown.  It is reported that Diana had been drugged.  She was told the she should consider her union with Prince Charles as only a means to produce heirs and nothing else.  It was made clear to Diana that Camilla was the Prince’s consort.
According to the witness, Prince Philip and the Queen Mother then shape-shifted into reptiles.  Diana was told that if she ever revealed the truth about them, she would be killed.  There are various reports of people saying Diana was about to reveal this information before she died.
The Queen told Diana that “all ears” would be listening to everything she said and “all eyes” would forever be watching her.  She was also told she would never again have the honor of attending another ritual and she was not to ask questions about them.
Should all the ears and all the eyes now be on the Royal Family?  Will all the world see them shape shift soon?


Thanks to CW and: http://victuruslibertas.com