OUT OF MIND » THE INSANITY OF REALITY » GOVERNMENTS & THE NEW WORLD ORDER »  Military Coup in Turkey; Erdogan Ousted

An army group in Turkey says it has taken over the country, with soldiers at strategic points in Istanbul and jets flying low in the capital, Ankara.
A statement read on TV said a "peace council" now ran the country and there was a curfew and martial law.
It is unclear who the group is or its level of support. Some top army officials are said to be detained.
President Recep Tayyip Erdogan said he would overcome what he called an uprising by a minority.
He told CNN Turk by mobile phone the action was by a "parallel structure" that would bring the necessary response. He has used this term in the past to refer toFethullah Gulen, a US-based Muslim cleric he accuses of fomenting unrest.
Mr Erdogan called on people to take to the streets to oppose the uprising.
He said: "I urge the Turkish people to convene at public squares and airports. I never believed in a power higher than the power of the people."
Mr Erdogan said he was on his way to Ankara and those involved in the action would pay a heavy price. His office said he was in a secure location.

PM Binali Yildirim had earlier denounced an "illegal action" by a military "group", stressing it was not a coup. He said that the government remained in charge.
The military group's statement on national broadcaster TRT, read by an announcer, said that democratic and secular rule of law had been eroded by the current government. There would be new constitution, it said.
A Turkish presidential source told Reuters news agency that the statement was not authorised by the army's command. 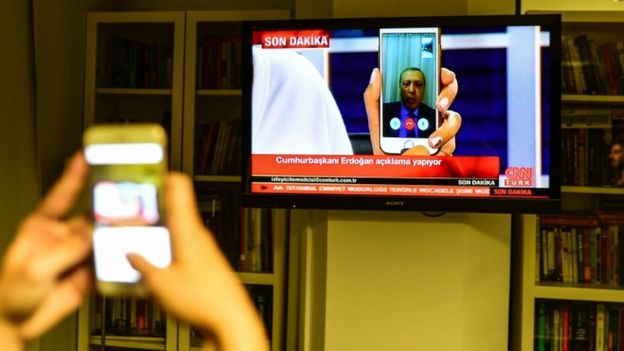 Image copyrightGETTY IMAGESImage captionMr Erdogan spoke to CNN Turk via Facetime
There are reports Turkey's top general, General Hulusi Akar, is among those taken hostage at the military HQ.
Mr Yildirim told NTV by telephone: "There was an illegal act by a group within the military that was acting out of the chain of military command. Our people should know that we will not allow any activity that would harm democracy."
Traffic has been stopped from crossing both the Bosphorus and Fatih Sultan Mehmet bridges in Istanbul.
There are reports of gunshots and at least one loud explosion in the capital Ankara. Other reports said soldiers were inside buildings of the Turkish state broadcaster in Ankara. 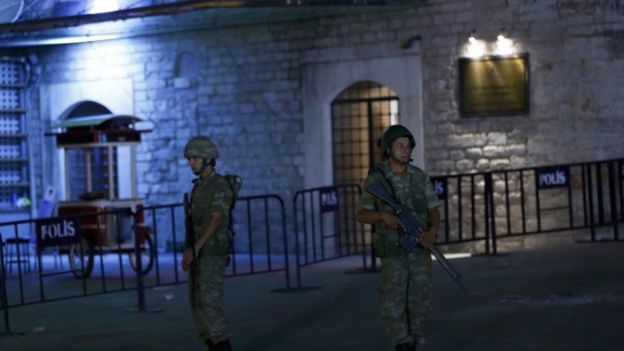 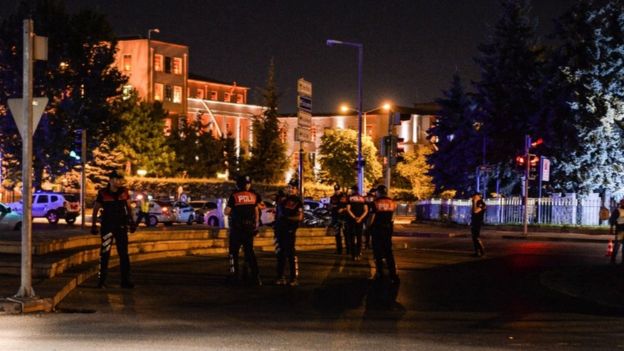 Image copyrightGETTY IMAGESImage captionPolice were standing guard outside the Turkish military HQ in Ankara
Gunfire was also heard outside Istanbul police HQ and tanks are said to be stationed outside Istanbul airport. All flights are cancelled, reports say.
One European Union source told Reuters that the military action "looks like a relatively well-orchestrated coup by a substantial body of the military, not just a few colonels".
Visiting Moscow, US Secretary of State John Kerry said he hoped for peace and "continuity" in Turkey.
British Foreign Secretary Boris Johnson said he was "very concerned" by events.
Last modified on Friday, 15 July 2016 18:47

OUT OF MIND » THE INSANITY OF REALITY » GOVERNMENTS & THE NEW WORLD ORDER »  Military Coup in Turkey; Erdogan Ousted

» Military coup follows judicial coup in Thailand
» UPDATES : Turkey in Chaos After Coup Attempt
» Rise Together ~ The Turkey coup and you: Could this be the start of a global reset?
» ""MILITARY COUP IN PROGRESS IN WASHINGTON D.C 9/10/13!!! THIS IS NOT A DRILL!!! "
» US Military Reveals Coup to topple Obama