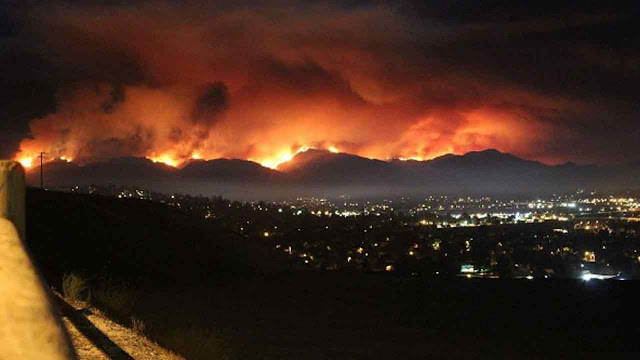 Jerry Brown is at the Democratic National Convention, so acting Gov. Tom Torlakson was the one who issued an emergency declaration for Los Angeles County due to the Sand Fire.
He also issued an emergency proclamation for Monterey County due to the Soberanes fire.
The announcement from the governor's office notes that the fires have burned tens of thousands of acres, threatened thousands of homes and other structures and caused evacuations.
The declaration clears the way for additional help when it comes to fighting the Sand Fire.
Earlier Tuesday, Los Angeles County Supervisors declared a local state of emergency for the Sand Fire. 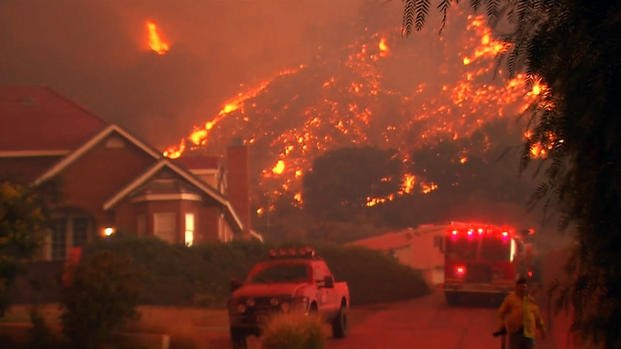 Photo www.nbclosangeles.com
The wildfire in Santa Clarita has torn through more than 58 square miles of dry brush, burned 18 homes and temporarily displaced about 20,000 people in Santa Clarita.
The move from the county allowed Gov. Jerry Brown to direct the state to take formal action to assist the county.
"This will provide the reimbursements for firefighting personnel because we have personnel from all over California in the Santa Clarita Valley and Antelope Valley fighting this fire," said County Supervisor Mike Antonovich.
"It will provide assistance for those who had their homes and property damaged."
Once containment is reached, that funding will be used to create a relief center where those impacted by the fire can access all of the various services available to them, Antonovich told KPCC ahead of the vote.
Firefighters aided by calm winds and cool night air managed to tighten their hold on the fire, increasing containment to 25 percent by Tuesday morning.
Those calmer winds and higher humidity levels slowed the fire's growth, said Ralph Gonzales, a fire information officer and former member of the Southern California Interagency Incident Management Team 3.
Winds that had gusted to as high as 25 mph on Sunday along ridge lines slowed considerably on Monday. 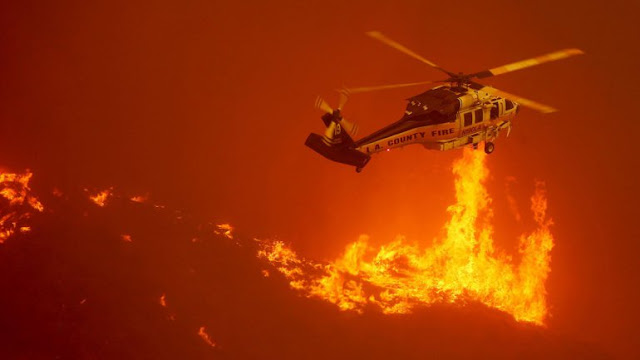 Photo ktla.com
Firefighting efforts also benefitted from a boost in personnel and resources.
More than 3,000 personnel were stationed outside the fire area by the end of the day Monday. Tuesday after 11 a.m. is a period that fire crews are paying attention to, Gonzales said.
Lower humidity, continued high temperatures and terrain will all influence the fire, he said.
Ridgetop winds are expected to strengthen and shift to the southwest this afternoon, according to Tuesday's briefing.
With gusts from 15 mph to 30 mph, analysts expect the fire to be more active Tuesday.
That increased activity could be on the east side, where authorities said the fire is moving towards Messenger Peak and Mount Gleeson.
Jay Nichols, with the Southern California Interagency Incident Management Team, said authorities are expecting minimal spread on the north side of the fire.
The west side of the fire still has the potential to impact Sand Canyon and Placerita Canyon, he said. Evacuation orders are still in place for those two communities.
Almost everyone else is being allowed back home.
The body of 67-year-old Robert Bresnick was discovered in a burned-out car outside a home on Saturday.
The L.A. County Coroner identified Bresnick Tuesday.
Bresnick was at a friend's house when officials ordered evacuations for the area, according to Ed Winter, assistant chief at the L.A. County Coroner's Office.
"He ignored the fire department's orders to evacuate, and went back in the house, then came out and got in his car, and apparently the fire overtook the vehicle," Winter told KPCC.
Bresnick's friend successfully evacuated, but Bresnick was declared dead at the scene.
Winter said an autopsy is pending.