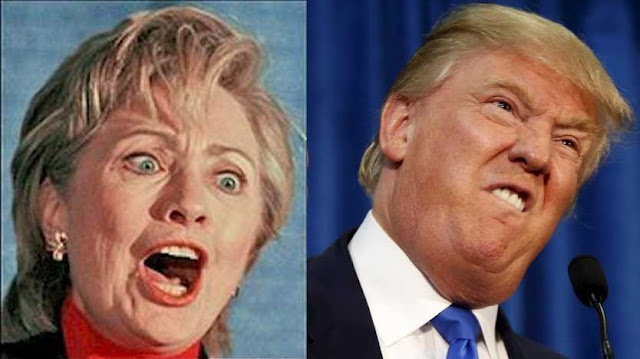 Did you hear the one about the politician who died; went to limbo, and was given the chance of choosing between heaven & hell?  He would get to spend a week in each place before deciding where he'd spend eternity, and started off with heaven.  He found it comfortable, but boring, he felt alone because he didn't know anyone, and the music was weird.   When he began his trial week in hell the politician immediately ran into all his old friends, who were apparently having a permanent party.  Everyone was drinking, cavorting, and indulging every deviant whim.  There was a feast for kings, with every kind of food imaginable; and a new concert every night.

Seven days went by faster than the dead politician thought, and soon he was back in limbo, it was time to choose between heaven and hell.  Without a second thought the politician said he was ready to go re-join all his friends in hell; and so was transported back there instantly.  Everything he'd seen before was now gone, the landscape was bleak and burning, with starving rats gnawing at his heels.  There was no food to be seen and all his friends were burning in agony.  The politician cried out that this wasn't right, demanded to know what happened.  His guide calmly explained it to him; "Well sir you see, last week was the campaign, today you voted!"

So here we are with the convention hysteria behind us; bracing ourselves for the next 100 days  of psy-war-ops known as political ads hammering us whenever we dare go near any kind of media: topped off with the coronation of a new president.

What does it say about the current state of things that when  Michelle Obama spoke at the convention she was wearing body armor under her dress?  It was so obvious I almost mistook her for a Star Wars storm trooper.  What it says is that despite all security precautions in place, they weren't confident they could protect her.  I'm not saying she shouldn't wear body armor; I'm saying she shouldn't have to.  A sad reality; things aren't supposed to be this way.

Politicians are thieves by nature, they want something; they just take it.  An excellent example is how they steal music as background for their campaigns, ads, and ceremonies.  In nearly every instance they ignore copyright & royalties because they want a particular song.  Yeah, I can hear some of you saying that's pretty minor; but my point is if they do not respect personal intellectual property rights, it's a character flaw. Steal a little - steal a lot.  I am reasonably sure that some who get into politics are sincerely wanting to bring positive change and reform; it's just that the whole system is so corrupt it assimilates & corrupts everyone involved. It's like trying to swim without getting wet.

"I alone can fix it."
The story going around the media pundits is that Ohio governor John Kasich was approached by Trump to be his running mate; with Trump reportedly telling Kasich he could be in charge of foreign & domestic affairs. (The job of the president) When Kasich asked what Trump would be doing instead of foreign & domestic affairs, the answer was, "Making America Great Again."  Comments like that don't come from thinking people, they come from reading your script, playing your part.  The words of a puppet. 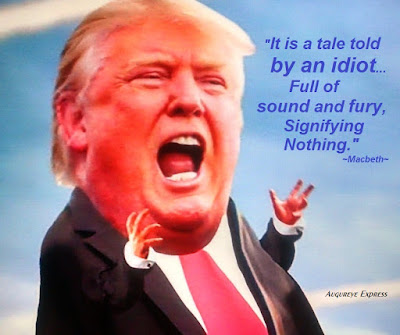 Trump is the big blunt instrument hammering us with fear & fakery.  For all his hype and vitriol, Trump simply has no substance.  He is a hate doll who spews out sound bites on cue whenever his string is pulled.  He's a human hot air balloon, er, make that Buffoon.  Have you really listened to him speak?  All he brings are short, easy to remember sound bites that have zero substance beyond fanning the flames of intolerance and racism.  He has no "platform" other than instigating hatred among Americans, driving us apart.

Trump speaks with a distinctive cadence & rhythm that tends to put listeners into an Alpha state of consciousness, exactly the same as when watching TV or a movie.  This makes it so easy to then plant the seeds of hatred with his caustic remarks-plant them right in your head.  He appeals to a range of people who are disenfranchised citizens; and feeling abandoned by the government.  It's all just empty rhetoric.  He has no plan for this country except to exploit it financially like he does with everything he touches: he's playing a role, reading his lines.  A vacuous bag of bovine excrement!

Everything about Trump (in his words) is always the biggest, the best, the most amazing.  The last time I heard bragging like that it was on the schoolyard, and the bragger was trying desperately to conceal his own incompetence and shit personality.  All that bluster & luster has to be hiding something.  You'll please notice that outside of his family, nobody else on the planet speaks that way about Trump.  How much money you have isn't as important as how you got it; and in Trump's case that means not paying the folks who work for you, then filing serial bankruptcy's to cheat the system.  Just another crook. 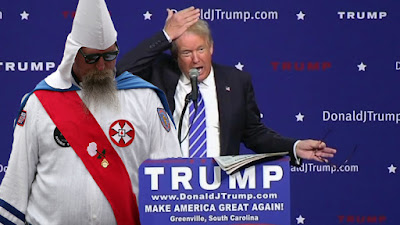 Not only does Trump openly admire Russian tough-guy leader Putin; he openly invites the Russians to continue hacking American computer systems!!  I am 100% certain that those words constitute a violation of the patriot act and likely even qualifies as treason yet you watch, he will suffer no consequence from his actions.  Just like he suffered no consequence for openly advocating genocide by taking out the families of terrorists.  Trump openly admires and compliments not only Putin, but Saddam Hussein as well.  North Korea's demented psychopathic leader "Un" thinks Trump is his kind of guy, and is probably in business with him.  If Trump's role models are these psychotic dictators, what kind of leader do you suppose he'd be?  Willing to risk it, are ya?

These issues never seem to come up in the daily "news cycle" because he is reading the script prepared for him.  The closer we get to the "selection" of president, the scarier he will become; sending 'voters' running for Hillary's protection.  Totally lacking in substance, Trump refuses to make his tax records public, invites Russia to cyber hack American citizens, and begs his followers not to watch Clinton's convention speech.  What is he so afraid of, that he would be seen for just what he is?

"It takes a villain"
Hillary was well rewarded for standing aside in 2008, and told that 2016 would be her time.  Unfortunately her reputation and record are so bad; the only person out of a field of 17 she could maybe beat, is Trump!

Hillary's convention spotlighted as many blacks and minorities as they could get to show up on stage - still pandering for votes.  Regardless of all image management efforts, let us not forget that Hillary's biggest backer is still Goldman Sachs, and that she recently evaded criminal charges by the skin of her teeth; I guess you could say that neither Hillary or Trump have any convictions.  Don't lose sight of the fact that according to recent polls, 62% of Americans distrust her.

Remember Vince Foster long time Clinton friend, business associate and rumored to be Hillary's secret lover?  You remember, he had a falling out with the Clintons and then threatened to expose their criminal actions; then suddenly changed his mind and opted for suicide instead.  It is altogether chilling to realize that his name is just one of over 75 Clinton 'friends & associates' who died under mysterious circumstances.  How about that?

Now factor in that Chelsea Clinton & Ivanka Trump are close friends, as are their husbands.  The Clintons and Trumps have been friends for years, except for this year's staged street theater election process...and when it's all done they'll remain friends.  It's all a sham, a great shining lie; no more "real" than professional wrestling.  It's just more heft & hype.

Both Trump and Hillary picked unknown lackluster running mates who totally represent the 1% of powerful rich elites & their interests.  Absolute clones of Joe Biden!!  The only difference between them is that Pence is more open with his bigoted stupidity and racist views.  Both of them are as white as white can get.  Are there no minority politicians qualified to be vice president?  Just the same old stagnation with different white names & faces.  Nothing changes! 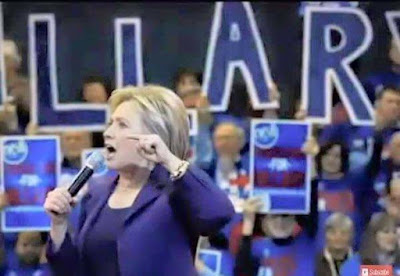 Doesn't it seem just cozy comfortable for the ruling elite that we only have the "two party system?"  Why not three or even four major parties?  The only thing multiple political parties would change is the elite's chances of staying in control of things.  Don't expect any kind of reform in your, or your children's lifetime; it simply won't be permitted.

The electoral college is the centerpiece of the 2-party system, the one which ensures that the people's voice isn't allowed to influence election outcomes.  Despite and aside from whoever gets the "popular vote" the electoral college is under no obligation to name that candidate as the new president.  The fix is always in, and I kinda believe we've always known that, and ignored it.  You can see how well that has worked out for us, right??

With these people it's always wedge issues, guns, race, gender identity, gay rights.  The goal is to drive us apart and against one another, hitting us at our weakest points. It's always the same thing just before every presidential election; they make a big stink over guns, which creates the fear that they'll come for our guns, resulting in ever-increasing gun sales.  Its always the same; politicians make all kinds of promises during the un-relenting campaign process, which are forgotten the moment a winner is declared.  Remember how Obama promised to close Gitmo?  It's still there isn't it?  Nothing changes. 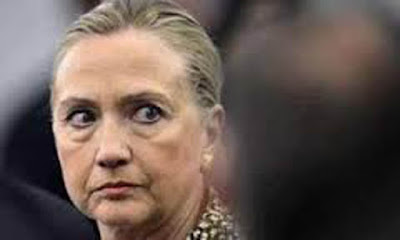