GLOBAL MARINE LIFE DIE-OFF ACCELERATES AS WE FIGHT OVER A RIGGED POLITICAL SYSTEM Fri Aug 05, 2016 9:49 am 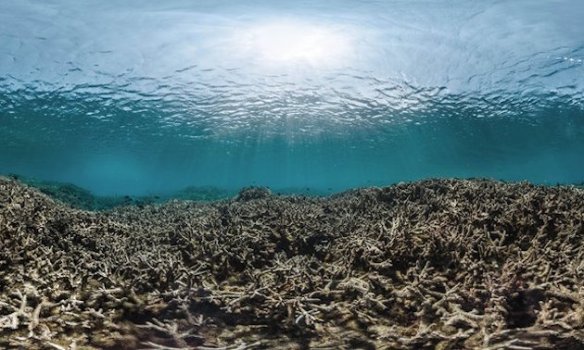 By now we should be able to acknowledge that the election is rigged and that none of the current candidates represent the deepest interests of the American people or the human race. Nevertheless a sea of human energy and resources are being dumped into the phony contest, all the while, critically important issues go undiscussed with no plan whatsoever. The amount of vitriol, anger, and hate in the election debate this year is suffocating, leaving one to wonder what would happen if this much energy were directed toward solving our most pressing collective problems.
Nothing is more important to life on earth than the condition of our global eco-systems, and in the 2014 edition of World Wildlife Fund’s Living Planet Report, it was reported that 52% of the world’s marine life has disappeared since 1970. Staggering.

“WWF’s Living Blue Planet Report tracks 5,829 populations of 1,234 mammal, bird, reptile and fish species through a marine living planet index. The evidence, analyzed by researchers at the Zoological Society of London, paints a troubling picture. In addition to the plummeting number of marine vertebrate species, populations of locally and commercially fished fish species have fallen by half, with some of the most important species experiencing even greater declines.” [Source]

In the years since the report was issued, the world has seen an unprecedented number of cases of mass fish and wildlife die-offs, and the causes of such dramatic occurrences are going largely undetermined.
The Pacific Ocean appears to be in greatest distress, leaving many to wonder what negative effects the ongoing disaster at the Fukushima Daiichi nuclear power plant has had on the sea since it began leaking radioactive material in 2011. In 2013, what has been described as a viral plague began wiping out millions of starfish and sea urchins began all along the Western sea board of the U.S., and subsequently spread to the Atlantic.
The latest developing mystery on the west coast is a newly discovered type of cancer, which is supposedly contagious and now killing millions of mollusks and clams. When coupled with numerous reports of cancerous tumors being found on sharks, whales and fish in the Pacific, it leads to the hypothesis that radiation is in fact causing severe damage to the chain of life in the Pacific. With no mention of the animal die-offs or the ongoing catastrophe in Fukushima among our leadership, it is clear that no politician or government agency dares address such a frightening issue, leaving the fate of the world’s largest ocean in the hands of TEPCO, the inept Japanese power company.

READ: NOT JUST BEES, ALL INSECTS ARE IN DECLINE AND HEADING FOR EXTINCTION

Additionally, massive, continent sized gyres of plastic continue to swell around the world with little to no attention, choking out marine life and birds by the millions, contributing to acidification of oceanic waters and a broad increase in ocean temperatures. Around the world, reports of fish and marine life die-offs continue to roll in, and it is no longer shocking to see photos of hundreds of thousands of fish, squid, or mammals lying dead on some public beach.
Rather than discuss a plan for resolving some of these issues, the government instead continues to display utter contempt for wildlife as demonstrated by the military’s ongoing plans to murder millions of cetaceans as collateral damage in the effort to test newly developed electromagnetic weapons and next generation SONAR. Additionally, the Olympic Peninsula on the upper west coast of the U.S., the most biologically diverse region in the U.S., has been designated as the testing grounds for electromagnetic warfare programs, causing citizen activists to take up arms in protection of wildlife.

READ: SILENCING THE SEA – THE LINK BETWEEN SOUND, LIFE AND THE MASS MURDER OF WHALES AND DOLPHINS

Geoengineering projects conducted by the U.S. government are also suspected of heavily impacting life in our oceans. Investigative journalist Dane Wigginton describes the effects of these projects as a ‘military assault on marine life,’ writing:

“Geoengineering is undeniably a major factor relating to the die-off of the oceans. The US military is certainly the single largest participant in the ongoing global climate engineering insanity (though all major powers are involved). Geoengineering is destroying the ozone layer which has subjected the planet to deadly levels of UV radiationgreatly contributing to the die-off of plankton populations around the world.” [Source]

The damage to life in our oceans is not inevitable, as much of the harm being done would be relatively easy to curb if only the political will could be mustered to do so, however, it appears that government complicity is at least partly to blame.
Priorities in our society are driven by mainstream news agencies, all of which are owned and operated by a mere 6 transnational corporations. Their agenda is set by their corporate backers and influential political entities, meaning that the public’s attention will always be directed toward issues which serve the interests of the corporate and political elite, and away from issues that really matter. For some reason, a healthy marine eco-system is apparently a non-issue for the elite, and while we fall into the trap of divide and conquer, bickering over which candidate is the worst, nothing is done to address the ominous catastrophe developing in our unhealthy oceans.
For a comprehensive list of global animal die-offs, see the annual lists compiled by End Times Prophecy.
ABOUT THE AUTHOR
Vic Bishop is a staff writer for WakingTimes.com and OffgridOutpost.com Survival Tips blog. He is an observer of people, animals, nature, and he loves to ponder the connection and relationship between them all. A believer in always striving to becoming self-sufficient and free from the matrix, please track him down on Facebook.

This article (Global Marine Life Die-Off Accelerates as We Fight Over a Rigged Political System) was originally created and published by Waking Times and is published here under a Creative Commons license with attribution to Vic Bishop and WakingTimes.com. It may be re-posted freely with proper attribution, author bio, and this copyright statement. Please contact WakingTimes@gmail.com for more info.

» Half Of Marine Life Has Been Wiped Out In One Generation, Reports WWF
» Marine Le Pen: The French Election Was Rigged
»  Former marine wins fight to adopt retired bomb-sniffing dog
» Everything is rigged - health, politics, finance and more - but here's how to beat the system
» The System Is So Corrupted and Rigged: The Coming Financial Crisis Will Be The Biggest & Quickest For The History Books