OUT OF MIND » THE INSANITY OF REALITY » GOVERNMENTS & THE NEW WORLD ORDER » Dear Americans, they are still laughing at you…

Dear Americans, they are still laughing at you… 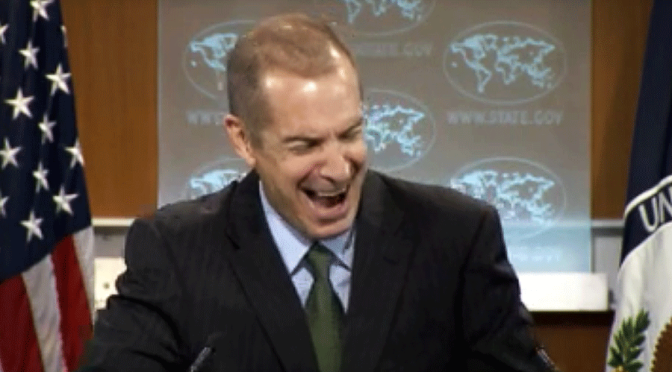 Dear Americans, they are still laughing at you…

Until now, not one from the US State Department has been held accountable for past failures and highly questionable decisions and actions which brought irreparable damage to countries they have plundered.
No wonder they can still laugh at those whom they believe were trying hard to pin them down but cannot.

“Welcome to the State Department,” began Toner. “I think we have some interns in the back. Welcome.
“Good to see you in this exercise in transparency and democracy,” said the spokesperson, before he and the whole room erupted into a fit of laughter.

“Is that what it is?” asked one reporter. “I thought it was an exercise in spin and obfuscation.”
“Sorry, I didn’t mean to break out in laughter,” added Toner after he eventually regained his composure.
Previously, the same State Department spokesman dodged questions about the recent chemical attack by US supported “moderate rebels” against civilians in Aleppo.
Washington dodged questions about a chemical attack in Syria, which the Russian military has blamed on US-backed militants, refusing to clarify whether the “incident” if confirmed would disqualify the group from being considered “moderate.”
Shells suspected to have contained chlorine gas were fired into the Salahuddin residential district in eastern Aleppo on Tuesday night, the Russian Defense Ministry said Wednesday, identifying the perpetrators as “militants from the Harakat Nour al-Din al-Zenki group, considered by Washington as ‘moderate opposition’.”
Al-Zenki has been identified as one of the groups that received TOW anti-tank missiles from the US.
Based in Aleppo, the group made headlines last month, after two videos emerged online showing what appear to be its members taunting and then decapitating the 12-year-old Abdullah Issa, a Palestinian boy.
Asked if the beheading and the chemical weapons use disqualified Al-Zenki from further US support, State Department spokesman Mark Toner dodged the question.
“We condemn strongly the use of any chemical weapons and any credible allegations of their use in Syria we’ll investigate,” he told RT’s Caleb Maupin at the press briefing Wednesday.
Regarding the investigation into the beheading, Toner said that the US was still “looking into that incident.”
“I know that the group itself said that they’d also made some arrests and set up a commission of inquiry into the incident,” he added.
https://www.rt.com/usa/354540-state-department-syria-chemical/
Obama’s red line used to be a chemical attack against civilians. That’s why the US intervened against Assad after accusing him of poisoning his own people, which later turned out to be launched by “moderate rebels”.
Now, the same ‘moderate rebels” are using the same desperate move against trapped civilians in Aleppo, and yet Obama is behaving like nothing has happened even if his own red line was crossed.
Elsewhere around the world, most leaderships are dead serious in uplifting the welfare of their countrymen. But in America, only one looks sincere enough to make it better.

“Power intoxicates men. It is never voluntarily surrendered. It must be taken from them.”

James F. Byrnes
Aside from the fiat monetary scam and bloodsoaked petrodollar, another significant source of funds for the Nazionist Khazarian Mafia is the “healthcare” industry which registered a whopping $3.09 trillion in 2014, and is projected to soar to $3.57 trillion in 2017, in the US alone. We believe that this is just a conservative figure.
We can avoid using drugs, defeat any viral attack and scaremongering, like the Zika virus, easily by knowing how to build our own comprehensive antiviral system. Find more about how we can kill three birds with one stone, right here.

OUT OF MIND » THE INSANITY OF REALITY » GOVERNMENTS & THE NEW WORLD ORDER » Dear Americans, they are still laughing at you…

» Dear Donald, This is what we want.
» THE RUINER : SHANE … THE WHOLE WORLD IS LAUGHING- VASTNESS
» That BBC Interview - Why It's Me That's Doing The Laughing: The David Icke Videocast/Podcast Trailer
» Rumors Swirl About President Harris’ Mental State After She Bursts Into ANOTHER Uncontrolled Laughing Fit
» Cell Phones - DID YOU READ THE PRODUCT SAFETY WARNING? from Bill Laughing-Bear in Alaska