Long-time readers of this blog will know already how much I despise fake gurus, fake spiritual teachers and phoney spiritual “celebrities”.
Well, it would seem that a certain internet-based New Age guru has been exposed in the past few days. It happened on Philosopher Stone’s blog and it quickly escalated to other sites across the internet, particularly in the alternative research community.
Quick background: Zen Gardner ran his own website , and was quickly gaining recognition in the alt research community, exposing the New World Order, paedophile cults, Satanic cults, secret societies, etc.
Then Steve Seymour dropped a bomb on his Philosopher’s Stone’s blog the other day. It turns out Zen Gardner, aka Don Ferguson was a 27 year member and leader in the Children of God cult from the ages of 22 to 49 and left the cult in 1999.

For those of you who don’t know, the Children of God was and is a notorious California New Age cult which started back in 1968 and quickly spread across the world headed by a known paedophile named David Berg. Berg was a psychotic, insane and perverted man who among other things, advocated incest, sanctified prostitution known as “Flirty Fishing” and rampant pedophilia among its members. The litany of things which the Children of God were involved in is beyond horrific and if you have the stomach to watch the many documentaries on Youtube  about the cult including survivors’ testimonies or read the documents, you’ll quickly understand how insane David Berg was and how the cult attracted deeply damaged or equally crazy people to say nothing of the incalculable amounts of damage the cult did to people who were in it. 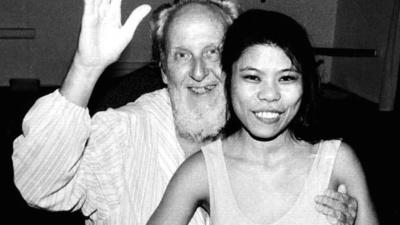 David Berg and a “Children of God” member.
I’m not going to go into the back and forth between Zen Gardner and Steve. If you want to know the exact details and chronology of this fallout,  I suggest reading the following articles and links in this order:
1) Zen’s convoluted and nebulous “confession” full of vague remarks and no concise details.
2) Steve’s exposé of Zen
3) How other researchers unfortunately became implicated for simply even highlighting Zen’s work
4) Zen’s reply to the “witch-hunt”
5) Steve releases some of his emails with the information where Zen admitted his deep involvement with the cult.
6) Steve is posting reactions from around the internet on Philosopher’s Stone’s homepage
A few things, right off the bat.
1) Don Ferguson fessed up to his involvement in this sick cult only AFTER being threatened with being exposed. Otherwise, he would never have mentioned it
2) Berg died in 1994. Ferguson left the cult in 1999, a full five years after Berg’s death claiming that he wanted to change the organization ‘from the inside out” 5 years is plenty of time to clean out  an organization or disband it completely as a high-ranking member, which he didn’t do.
==============
On a personal note, it was Zen/Don Ferguson who helped put me on the blogosphere radar screen. Someone had posted one of my first blog posts in the comments section of his website and the next day it was in the headlines section of Icke’s website. I used to read Zen Gardner’s website on and off after that but then about 2 years ago or so, his old, crunchy, granola home-made cobbley website suddenly got a massive upgrade and became super-professional, polished, full of sponsors  and rolling ads. Money was definitely coming in from somewhere. The energy had changed completely and not in a good way so I stopped visiting it.
Not only that, but I just didn’t find his writing all that insightful any more. It was the same old, same old “The world is undergoing a shift, so are you, hold on to your hats”, mixed in with New Age pabulum and flowery feel-good lingo. Like an internet personal coach, full of fluff but no practical or sound advice.
Then Zen Gardner was suddenly all over the internet, being interviewed on other people’s shows or podcasts, a flashy new book, he was suddenly some New Age alternative researcher celebrity. Definitely not as big as David Icke or Alex Jones , but on his way. Getting a Youtube channel and even a book called ‘You are the Awakening”. Zen was invited to conferences all over the world as a speaker or panelist and he had his own group of followers on his website. Because Zen was very good at writing and articulating certain ideas, his website was very popular with newbies, people just coming out of their shell and looking around for writers/thinkers who can explain to them what the hell was happening.
===============

There’s a bigger issue behind all of this: How does one discern a real teacher or spiritual guide from a  fraudulent one? It seems to always boil down to this with these kinds of stories. It’s not just Zen Gardner, Marc Gafni, Bikram Chowdhury, John Friend, the Children of God, the Rajneesh movement, going to Wanderlust or some equally idiotic gathering like SpiritWeavers or any of dozens of other examples.

Um, it doesn’t work like that…
The bigger problem here is that there is a genuine spiritual hunger out there. How does a person who honestly doesn’t know any better, discern the real from the fake? People are looking, sometimes genuinely, sometimes with less intensity, but looking for *something* nonetheless because whether you want to admit it or not, spirituality and the search for profound meaning to our lives is as much a part of the human condition as looking for food to eat, a safe, warm place to sleep and a friend to talk to. Unfortunately in a fast-food market-oriented world like ours, it means there are millions of fakes out there willing to sell their fake wares and fake teachings to the person who never developed any sense of discernment.

It’s not real!
Organized religion has failed, globalization means that teachings which were once inaccessible are suddenly at anyone’s fingertips, there’s the problem with cultural appropriation or the misuse of sacred teachings and paraphernalia by people who either don’t know what the hell they are really talking about or deliberately distorting original teachings to suit their own agenda and inflate their pocketbook. Don’t believe me? Its even hit the shamans of Siberia with shyster Russian “spiritual teachers” (from 3:38 –  5:14)

The bigger problem here is that there is a genuine spiritual hunger out there. How does a person who honestly doesn’t know any better, discern the real from the fake? People are looking, sometimes genuinely, sometimes with less intensity, but looking for *something* nonetheless because whether you want to admit it or not, spirituality and the search for profound meaning to our lives is as much a part of the human condition as looking for food to eat, a safe, warm place to sleep and a friend to talk to. Unfortunately in a fast-food market-oriented world like ours, it means there are millions of fakes out there willing to sell their fake wares and fake teachings to the person who never developed any sense of discernment.

I admit, I have also had my run-ins with fake teachers and guides and the damage they can do to a person can be huge and take years to recover from. Instead of helping to bring you forward a few steps, they can actually push you back a few meters. One unfortunate thing I have noticed is how deep down inside, many people don’t actually want to make decisions of their own but prefer being told what to do, what to think and how to live. It’s easier because someone has done the blueprint for them already. It’s terrifying for some to completely break free and do things on their own and forge their own path. It’s too hard.
I wish I could offer a few rules and guidelines to help folks discern real teachings and teachers from fake ones, I can’t. I can only offer what I’ve observed so far.
1) Never accept anything and everything at face value. Do your research. Ask pointed, uncomfortable questions
2) You have a brain so use your critical thinking skills. I may follow a few writers or teachers whose writings have inspired me but that doesn’t mean I completely agree with them on absolutely everything they ever wrote.
3) Don’t ever do anything which makes you feel uncomfortable. Listen to your FEELINGS. Just because your 75 year old male guru tells you to get naked with him and slip into the hot tub to receive “secret teachings” or “initiation”, doesn’t mean that you should do it.

4) Don’t mistake genuine ethnic origins with genuine teachers. There are a ton of shady guru-types in India and shamanistic types in South America who prey on white people’s ignorance of their cultures. Just because someone is brown and from India doesn’t automatically make him an authority on ALL Vedic teachings.
5) Keep a track of all inconsistencies in everything which you’ve noticed in what they do and say and question them on it. If someone starts getting hot under their collar and perceives your questioning as being confrontational, that’s a red flag right there.
6) Run for your life when someone asks you to invest a huge amount of cash to join their movement, to give all your stuff away to them, tells you to break off all your friendships and family connections to join their group
7) Keep a close eye on your teacher’s own life, personal habits and lifestyle. I would think twice before taking advice from someone who preaches about the importance of health and hygiene yet smokes like a chimney and lives in a pigsty.