Watch LIVE here via Livestream at 6:30PM EDT (12:30AM CEST)!
http://www.keshefoundation.org/media-a-papers/keshe-news
Thanks to: https://mainerepublicemailalert.com

If you watched any of the Keshe teaching sessions showing what the various “inventors” were doing with their Magrav plasma energy generators, you may recall Douglas. In this video he shows us the generator he built and many appliances of various power requirements all hooked up to the generator at the same time and functioning beautifully. Kudos, Douglas!
You will note that he points out there is only one power source: the Magrav plasma unit. He has not pulled any power from his home via an extension cord or anything else. This is a standalone unit, and Douglas no longer needs to be “on the grid”. He can be self-sustaining as far as power for everything in his home.
That alone explains why the greedy controllers did everything they could to prevent this technology from making it to the public. Keshe is lucky to be alive.


Veterans Today brought us this news August 13th. They have said before that Keshe and his team are the real deal. I hope you do, too. This simply cannot be buried by the controllers and their minions any longer. The People demand freedom and transparency and we will bring this technology to the world. They tell us…


What you see in the video is now loaded into the back of a rusty pickup truck and heading across Kentucky, into Ohio, then Pennsylvania, down into Maryland and into the District of Columbia.

One of the biggest secrets on Earth is out of the bag and I will soon publish a post about the amazing results people are having with the Keshe pain management tools. The space age is HERE. NOW.
We’re rooting for you, Douglas. Be safe.  ~ BP

Breaking: Did the World End Yesterday and Nobody Noticed?

The end of the hydrocarbon/fiat currency world or magnificent video fakery, Keshe device heads by backroads to White House confrontation

August 13, 2016
By Gordon Duff, Senior Editor
The device you are seeing, done by one of five teams testing new Keshe technology to end all dependence on wind, solar and nuclear energy, oh yes, we mean oil and coal too, is, if we can believe our eyes, powering enough appliances to run an entire house. 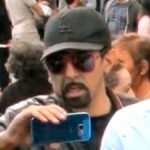 Bari murder suspect photographed in Paris
There are issues here that tie to secret societies, police informants and “crisis actor” recruiters, the terror attacks in Paris and a “Boston brakes” murder in Italy only a few weeks ago, but we are getting ahead of ourselves.
The video above was requested by me after seeing the first one where everything was on a table. I am the kind of person who believes people will do anything for attention including drill holes and hide wires. I was raised “bad.”
There is a massive effort out there to discredit Keshe technology as “fantasy” even though DARPA and Boeing are confirmed to be getting excellent results using Keshe MagRav units they hope will power naval vessels. Rumor has it that Boeing has a Keshe powered drone circling the planet now running on “fantasy.”
This second video could be faked too so we have a well known Washington law firm aided by top scientists, doing their own. A little snip here, it seems “top scientists” are all to familiar with the technology being used. I then ask myself, if they knew about this all along, technology valued now (in a written offer I have seen from the government of China) at $1.5t, why didn’t they take the money?
VT Science Editor and particle physicist Jeff Smith says that this is the coverup of all time, that as far back as 1880, according to his research in the secret archives of the US Department of Energy, everyone knew electricity was free.
Then we go back to the real or imagined discussion between Tesla and financier (read criminal) J.P. Morgan. Tesla had, if the story is accurate and we believe it is, just told Morgan he was looking for financing in order to set up a worldwide grid for the delivery of wireless electrical power…through the air. Morgan’s answer:
“Can we put a meter on it?”

As history shows us, Tesla was crushed, his inventions claimed by Edison and hydrocarbon slavery has ruled the world.

A century later 17% of the world has no electricity whatsoever and 38%, according to World Energy Outlook, and powerplant projects, Kenya, Nigeria, Ghana, are mysteriously crushed, IMF roadblocks or the “unseen hand.” Organizing and financing these is not only frustrating but it can be bad for your health as well, if you get what I am not saying, personal experience here in a dozen countries.
We are noting a ground wire being used and note that devices in the loop, the refrigerator compressor in particular, have capacitors in the circuit.
What you see in the video is now loaded into the back of a rusty pickup truck and heading across Kentucky, into Ohio, then Pennsylvania, down into Maryland and into the District of Columbia.
For those of you who don’t know of Keshe, I will keep this short. He was born in Iran, trained as a nuclear engineer in Britain and worked for their power company until recruited by the Ministry of Defense for some unknown reason.
Keshe left the MOD and went on his own, announcing astounding technology. Britain tried to bring him back into the fold, inviting him to a private “show and tell” at a “pre-day” for the Farnborough Air Show, a major defense exhibition. Oddly, I was in attendance that day as well, a curious coincidence.
Keshe then received an invitation through the Belgian Royal family. There, a group of human barnacles attached themselves to him, members of a pedophile ring working with Belgian police, all Freemasons. The head of the group runs an anti-Keshe website and, according to French intelligence sources, is directly tied to terror recruiting for the recent Paris attacks including the Bataclan holocaust. 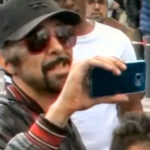 Here he is “burned”
Working with them is another “anti-Keshe blogger” out of Paris who claims to be a journalist. Our sources, highest level, say this is a police informant, a Tunisian, who “shops” activists to the police and helped recruit the Bataclan killers. The police are protecting him and may well have killed one of their own to protect his role in the Hebdo incident as well.
The entire group ties together with a network of bogus companies in Paris controlled by Freemasons, companies which all tie to a shady Brussels “investment bank.”
Quickly finishing up the Keshe background; when Keshe turned out to be uncooperative even after threats, local police, off duty of course, in Belgium tried to run Keshe and his wife off the road, mind you while firing their service weapons at him like something out of a TV show. Keshe then left for Italy where he remains.
However, a few weeks ago, 24 year old Fabio Alonzo and his fiance, Natalie, were run off the road by 3 semi-trailer trucks driven by Albanians who were allowed to flee Italy without questioning. When private forensic investigators were hired to review the scene, local police threatened Keshe. Fabio is dead, after what appears to be more of a beating with a tire wrench than car accident. Natalie is in a coma under police protection, for what that is worth.
Sources (highest) at a NATO counter-terrorism organization opened their files for us. Local police in Bari, Italy, where the accident occurred, run the smuggling port there, part of a Mafia organization, and are contracted with ISIS through the Tunisian consulate in Milan (and Israeli intelligence). Milan makes documents to move Tunisian “refugees,” read “terrorists” into Italy under special arrangement between the two countries, who are then given instant citizenship in the EU through the Milan document factory.
Then the terror cells, with perfect papers and weapons, travel this “ratline” to Paris and beyond, ready to bring down the EU. Who are the players here? Who do you think?
As this moves on and on, our young man is still in his truck, picking up a security detail now, heading into Eastern Ohio.
For those who saw the video, did he hide a power cable under his walkway or is this going to mean and end to it all? Please remember, nobody involved in this is an expert and certainly no one has the power to oppose the incredible forces arrayed to crush what we hope is the first pure “more than simple over-unity” power system.
Source