Latest topics
» “Massive Explosion”: Something Is Happening in the Skies of Montana 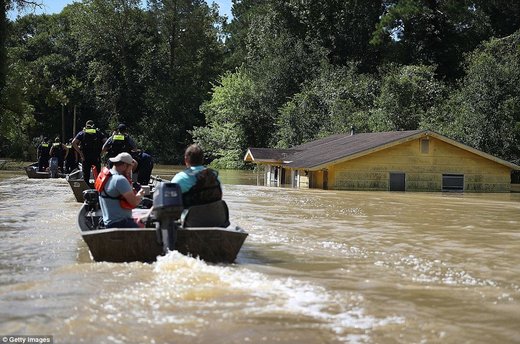 
A total of 11 people have now been killed in the devastating Louisiana floods, the governor said on Tuesday, and at least 40,000 homes were damaged.
Giving a stark assessment of the widespread disaster, Gov. John Bel Edwards spoke at a news conference alongside FEMA administrator Craig Fugate, saying ‘well over’ 20,000 people have been rescued since the flooding began on Friday.
His office later increased that figure to more than 30,000 – which included a 78-year-old woman who spent a night stranded in a tree.
Beginning on Friday, a torrent of about two feet of rain inundated the southern part of the state over a 48-hour period, and days later many homes and businesses were still underwater.
Singer Taylor Swift is donating $1 million to Louisiana flood relief. She said Tuesday that Louisiana residents graciously welcomed her when she kicked off the U.S. dates of her ‘1989 World Tour’ in the state last year.
While some areas were entering recovery mode, the governor warned new places downstream could see flooding and that officials are still in search and rescue mode.
‘I don’t know we have a good handle on the number of people who are missing,’ the governor said.
Some residents returned to their flood-damaged homes and businesses for the first time on Tuesday and found a soggy mess.
David Key used a small boat to get to his house in Prairieville and said it had taken on 5 inches of ‘muddy nasty bayou water.’ There were fish and thousands of spiders. And mold has started to set in.
‘I’m not going to lie, I cried uncontrollably,’ he said. ‘But you have to push forward and make it through. Like everybody says, you still have your family.’
The extent of damage was coming into clearer view. About 40,000 people had signed up for FEMA assistance and eight more parishes were added to the federal disaster declaration, bringing the total number to 12.
In Livingston Parish, one of the hardest-hit areas with about 138,000 people, an official estimated that 75 per cent of the homes were a ‘total loss.’
But Lori Steele, spokeswoman for the Livingston Parish Sheriff’s Office, was upbeat, saying the rescues taking place now are less of a ‘life-saving nature’ and more to help people who were running low on supplies in flooded areas.
As the main roads drain, emergency crews were going to be able get hot meals, water and medical supplies to the 25 shelters in the parish.
‘We’re tired but today’s a good day,’ she said.
Rivers and creeks were still dangerously bloated in areas south of Baton Rouge as people filled sandbags there to protect their houses, bracing for the worst as the water worked its way south.
In Ascension Parish, officials said some small towns have already been inundated.
The governor said more than 8,000 people were in shelters, but the number was constantly fluctuating as people arrive and leave. 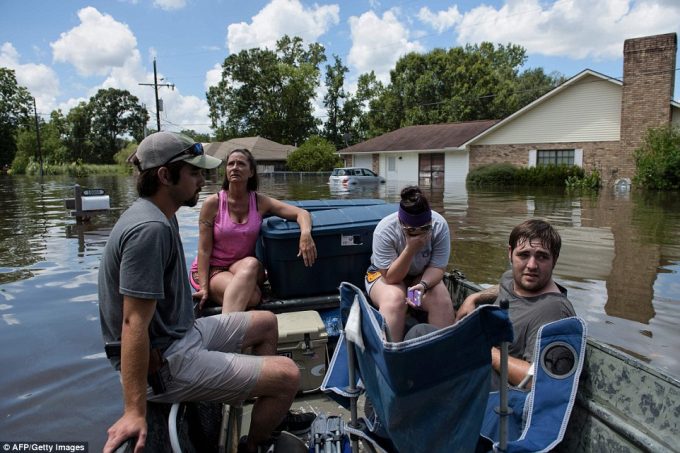 John Booth (left) sits with Angela Latiolais’s (second from left) family while helping them save their belongings
Meanwhile, a curfew is being put in place in Baton Rouge as authorities respond to reports of looting.
Multiple arrests were made on Monday and authorities were fielding calls about businesses being looted on Tuesday.
The East Baton Rouge Parish Sheriff’s Office says the curfew will be in effect from 10pm to 6am.
The slow-moving, low-pressure system crawled into Texas, but the National Weather Service warned the danger of new flooding remained high due to the sheer volume of water flowing toward the Gulf of Mexico.
The latest deaths were attributed to three accidental drownings. No other details were immediately released about how the men died.
One town, Zachary, received more than 2 feet of rain in a 48-hour period that ended Saturday morning. Another, Livingston, got nearly 22 inches over the same stretch.
Rivers in the region reached historic highs — occasionally shattering old records dating to 1983 floods.
The four feet of water that wrecked James DuPont’s used car dealership in Baton Rouge has finally receded, allowing him to take stock of the devastation Tuesday.
His cars were all coated with a thin layer of dirt. The wooden floor boards in his office are scattered like matchsticks, exposing the wet cement underneath. All of his paperwork is a water-logged mess.
Floodwaters reached the ‘Open’ sign on his rented office, and the 24-year-old fears his business, Louisiana Direct Buy, is now closed for good.
He had a dozen or so vehicles on the property, including his personal car, and they all appear to be total losses.
‘I don’t have flood insurance so everything is gone,’ he said. ‘I’ll try to salvage what I can. I don’t know if I’m going to be able to open back up or not.’ 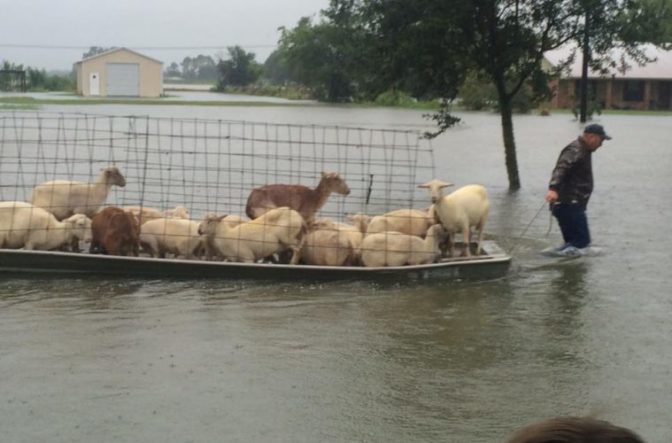 Written by Alanna Ketler
As devastating floods continue to affect various parts of Southern Louisiana and Mississippi, heroic locals and rescuers are doing everything they can to make sure animals in need are brought to safety, even if that means putting their own lives in danger.
(All images courtesy of Denham Springs Animal Shelter) 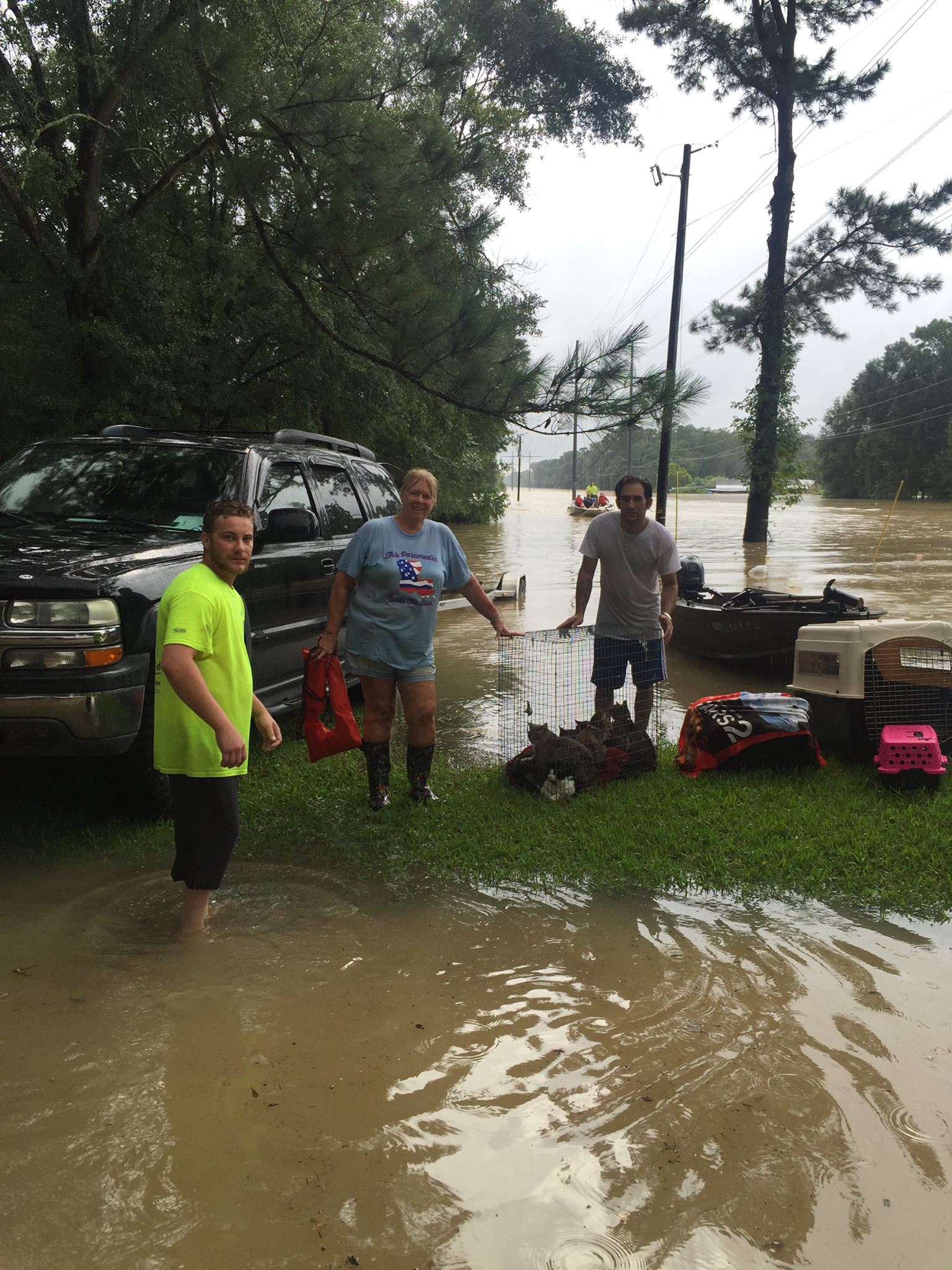 Last Friday Denham Springs Animal Shelter in Louisiana was completely immersed in the rising floodwaters, with only the roof of the building remaining visible. “The dedicated staff and volunteers fought to save as many animals as possible from the flood waters, eventually having to unlatch the kennel doors and let the dogs swim out and climb onto the roof,” the rescue wrote on GoFundMe. 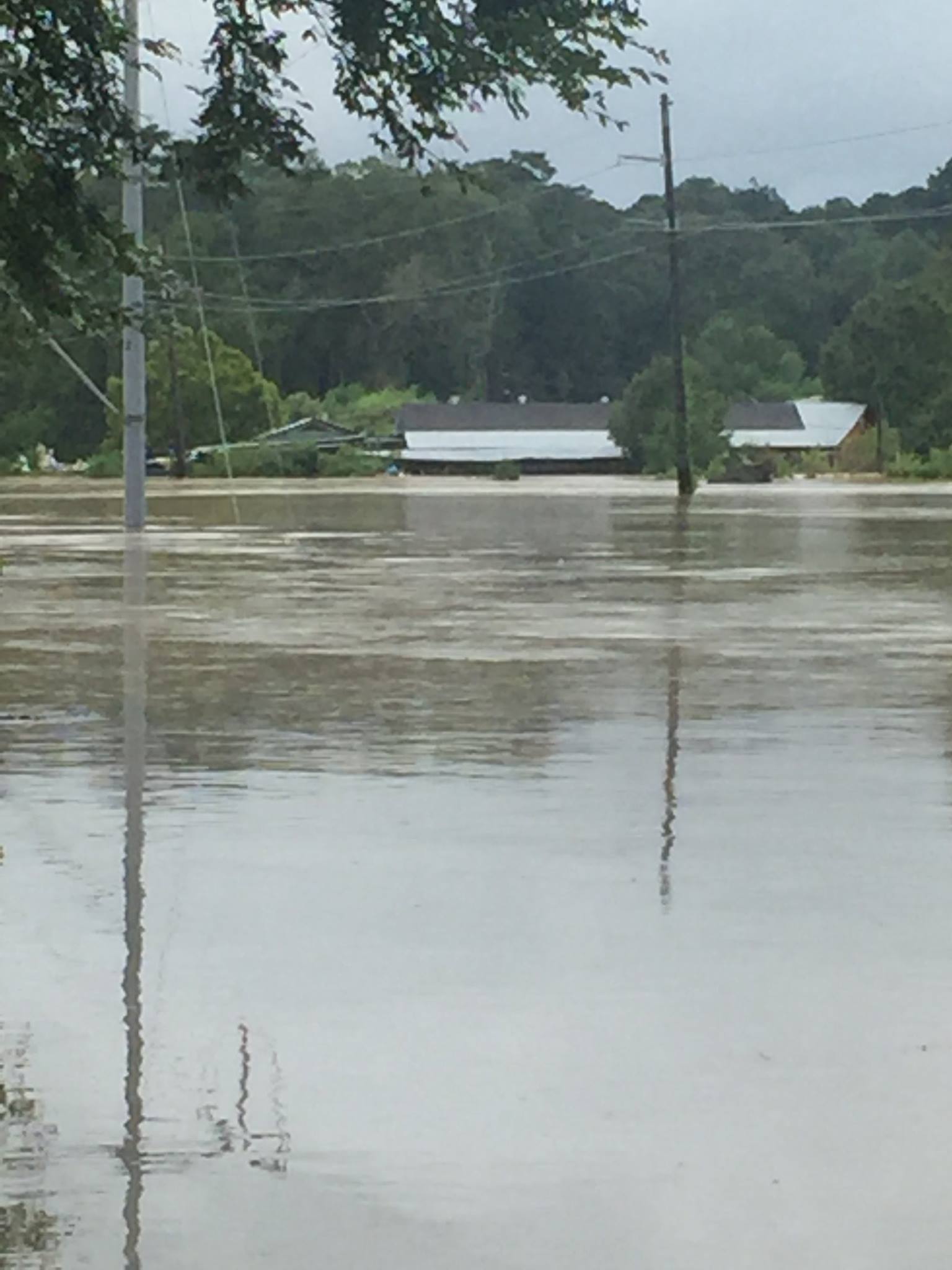 They used boats to transport the rescued dogs and cats to higher ground. Local organizations and businesses have been doing everything they can to assist the shelter in feeding and even providing some temporary housing and care for the animals. Meanwhile, the shelter workers are trying to find some temporary foster homes while shelter damages are repaired. 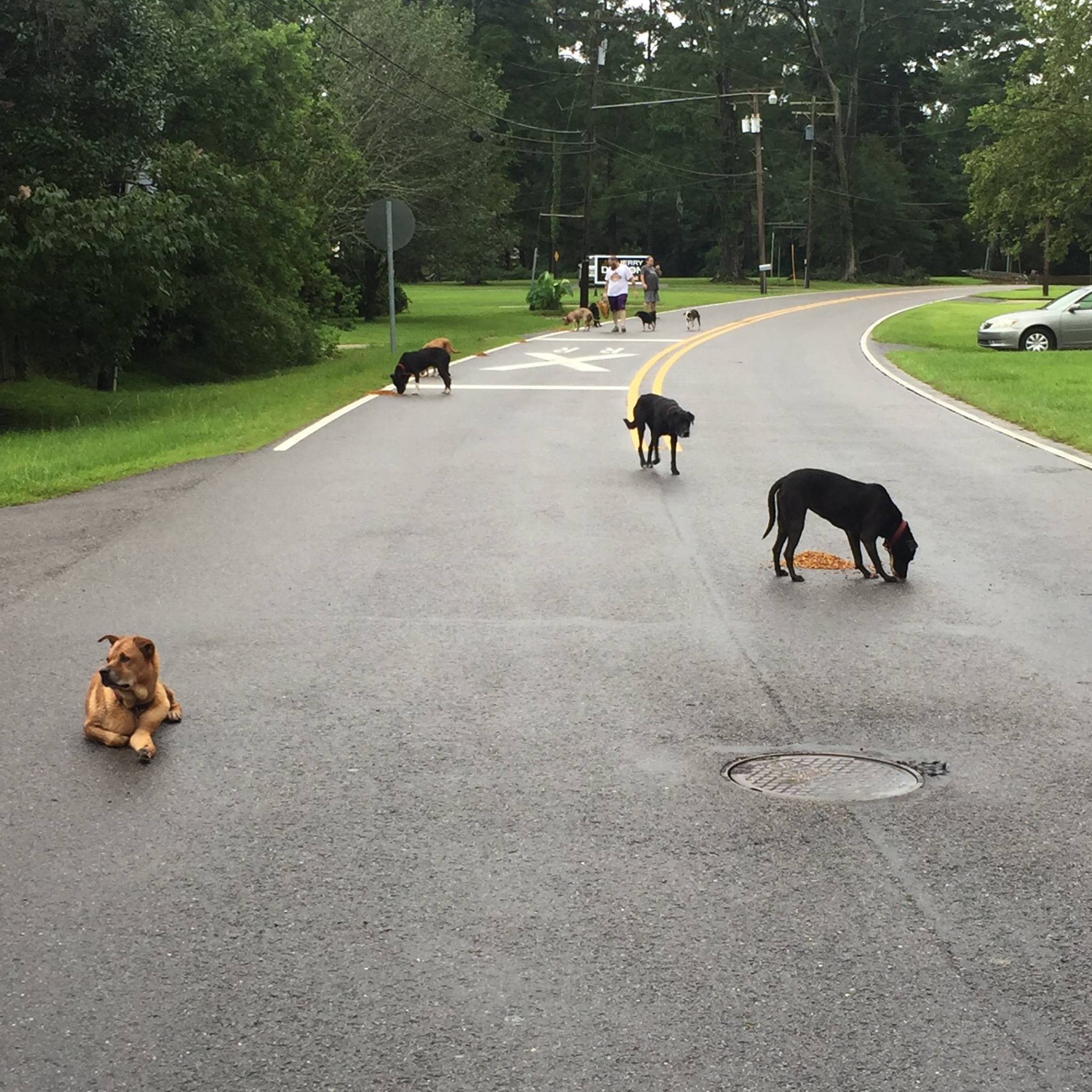 People across the state were doing whatever they could to save their own animals and livestock. Below is a picture of a man pulling a boat full of sheep to safety. 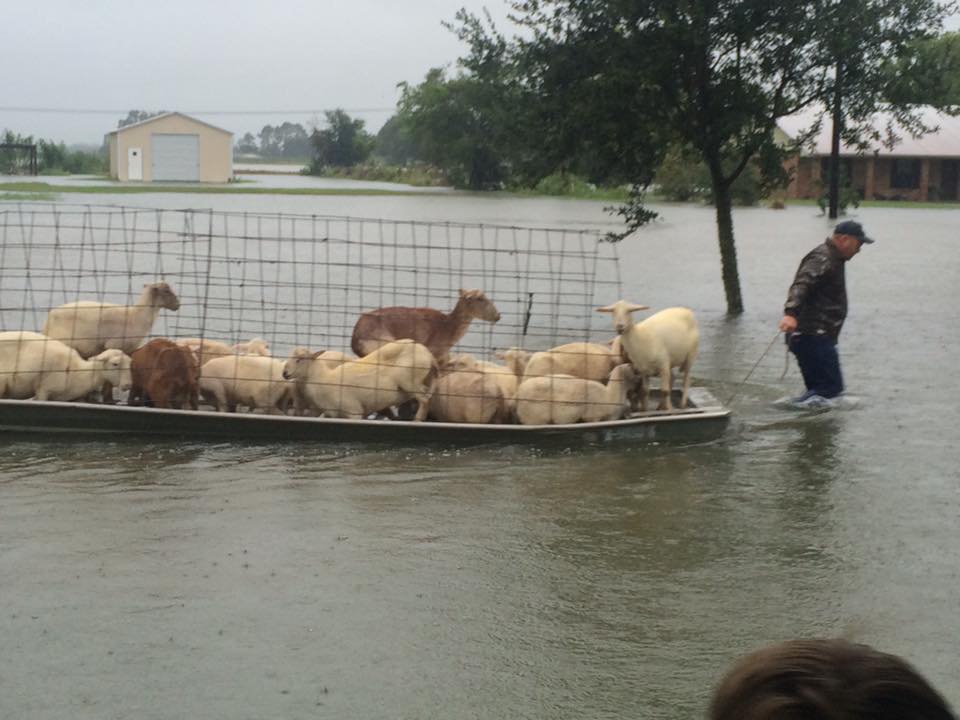 It’s incredible to see so much compassion coming from people who may or may not have lost everything and yet are continuing to help those who cannot realistically help themselves. These animals may otherwise have been trapped in buildings underwater or simply unable to swim to safety. 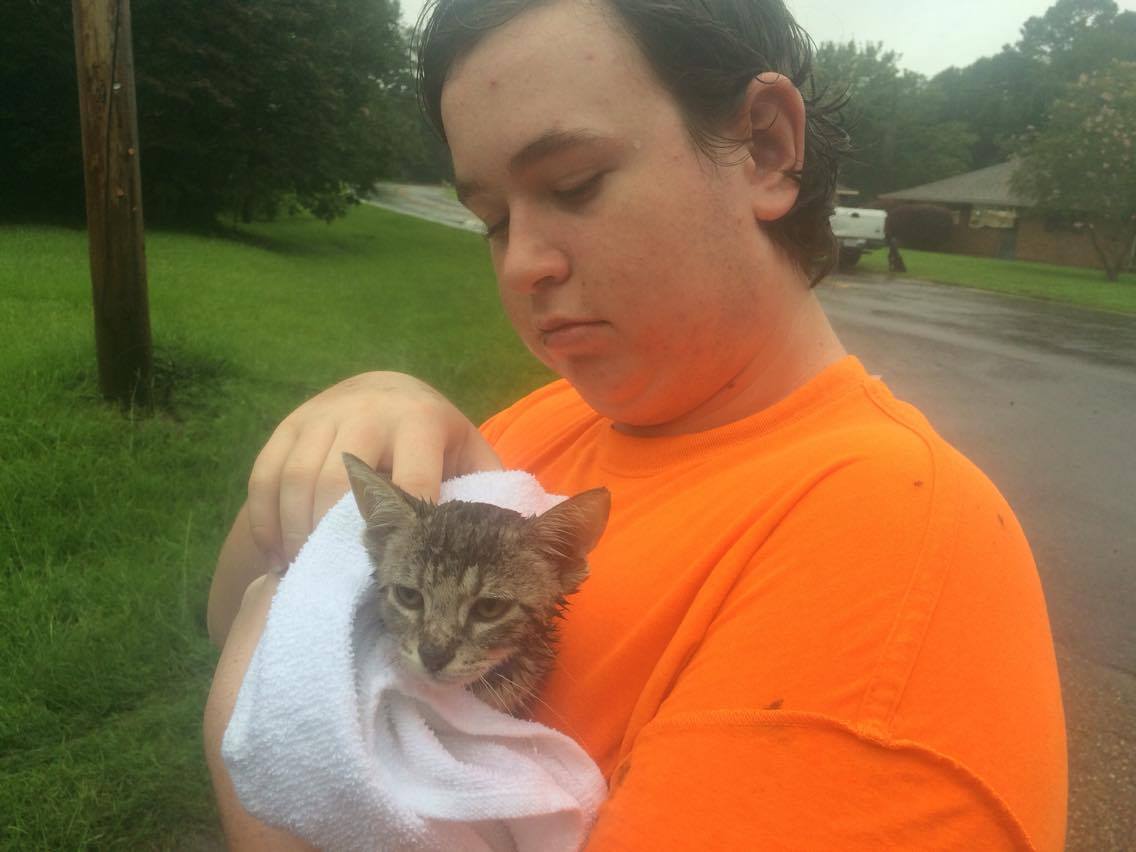 As of yesterday, Louisiana Department of Wildlife and Fisheries Enforcement agents have rescued 464 animals, in addition to more than 2,300 people.
“Search and rescue operations are still ongoing and the number of people and animals rescued will rise over the course of the day into Aug. 15,” the organization wrote on Facebook. “Agents will also remain on alert and be ready for further search and rescue activities until the flood waters recede.” 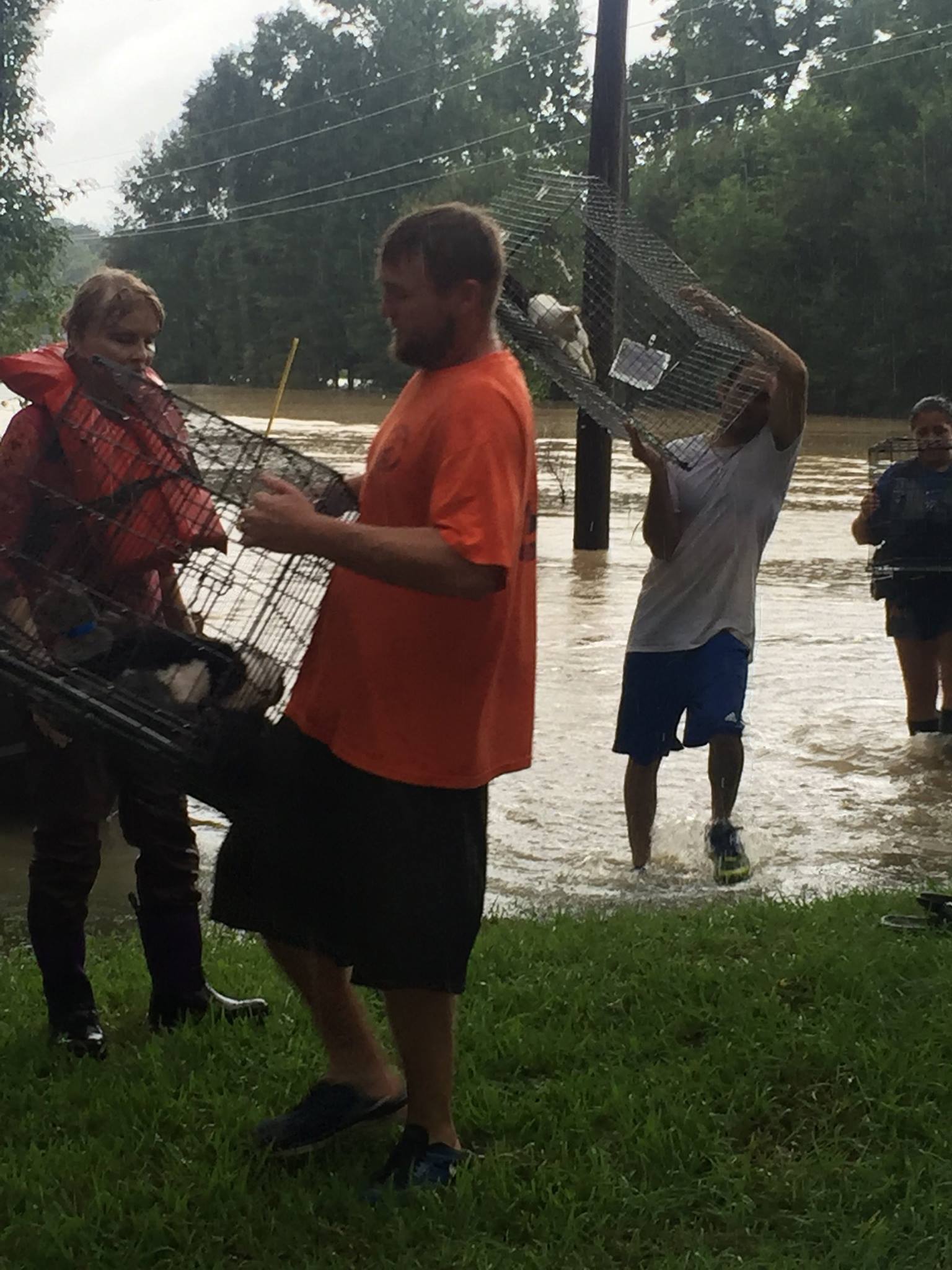 Members from the Louisiana State Animal Response Team (LSART) have also been monitoring the flood conditions and have been sending out teams to help with the current rescue efforts.
To support LSART and their ongoing efforts, you can do so by making a contributionhere.
You can also support the Denham Springs Animal Shelter’s rescue and rebuilding efforts by making a donation here, or contributing to Animal Rescue New Orleans, which has already been helping the shelter with relief efforts, by clicking here.
If you currently live in Louisiana and would like to become a foster parent for one of the many animals in need of a temporary home, you can do so by filling out an application here.
Much Love
Originally posted @ Collective Evolution