The perfectly preserved body, carefully mummified alien, found buried in an ancient pyramid. The mysterious creature was between 150 and 160 centimeters, and was found by archaeologist near Lahun when investigating small pyramid near the Dynasty doceaba of Senusret II. However, this fact was not discovered immediately. “Mummy of alleged alien, dating back more than 2,000 years, said a source from the Egyptian Department of Antiquities, which submitted the details and photos of the mummy, but on condition of anonymity. ”
The remains of the alien created a lot of controversy in the world.

Some online sources say this is some kind of reptile because of the features that characterize these animals as their eyes too big oval. The inscriptions on the tomb of the mummy show that it was counselor to the king named Osirunet, meaning star or sent from heaven. What has fueled passions that it is alien… 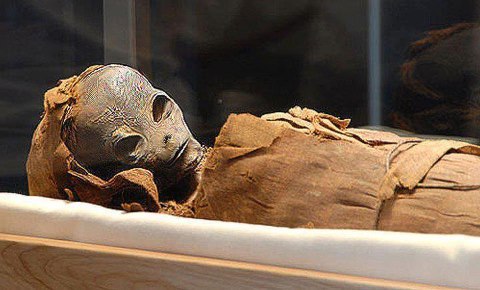 “This mummified body was buried with great respect and care, in the tomb were a number of strange objects that archaeologists could not identify them.
According to Egyptian sources, the alien mummy was discovered by Dr. Victor Lubeck, Czech and retired professor from the University of Pennsylvania. Archaeologist finds hidden compartment in conducting excavations of a small pyramid south of the main pyramid, Senusret II, which contains the remains of pharaoh Queen. Over mummy also found, and mixtures of gold and clay covering the body, and traces of linen. Objects, artifacts made of synthetic type that were unable to identify. Nobody found similar elements in other Egyptian tombs.
An anonymous source said that the discovery has caused great consternation among Egyptian officials, who want to keep it hidden until they find a plausible explanation for the strange mummy. The government has consulted with a number of respected archaeologists, but to date no one can explain the findings.
“The truth is that every expert who has seen the mummy concluded that it is not from earthly origin,” said the source. “Acknowledging that this is an alien who somehow ended as advisor to the Egyptian king.” But all the government dissociate themselves from that conclusion that according to those who believe that the Egyptians had help from aliens in the creation of their civilization, this is proof. “The Egyptians refuse to believe that their heritage comes from space.”
Source

A mysterious alien mummy hasn't baffled scientists: the image of a human child mummy was embellished with Photoshop. On 21 March 2016 the web site Worldwide Science Stories published a post reporting that the discovery of an "alien mummy" in an Egyptian pyramid had been confirmed by archaeologists speaking under condition of anonymity:

The mysterious creature was between 150 and 160 centimeters, and was found by archaeologist near Lahun when investigating small pyramid near the Dynasty doceaba of Senusret II. However, this fact was not discovered immediately. "Mummy of alleged alien, dating back more than 2,000 years, said a source from the Egyptian Department of Antiquities, which submitted the details and photographs of the mummy, but on condition of anonymity.
The remains of the alien created a lot of controversy in the world.
Some online sources say this is some kind of reptile because of the features that characterize these animals as their eyes too big oval. The inscriptions on the tomb of the mummy show that it was counselor to the king named Osirunet, meaning star or sent from heaven. What has fueled passions that it is alien ...

The "anonymity" clause presented an immediate red flag, as it conveniently inhibited any nosy fact-checking of the claim. Another less obvious clue was the non-existence of any organization called the "Egyptian Department of Antiquities": the former Supreme Council of Antiquities (SCA), a branch of the Egyptian Ministry of Culture, became the Ministry of State for Antiquities (MSA) in 2011. That agency historically oversees the "conservation, protection and regulation of all antiquities and archaeological excavations" in Egypt.
Worldwide Science Stories cited primarily unnamed sources in their article, identifying only an individual named "Dr. Victor Lubeck," who (like the "Egyptian Department of Antiquities") doesn't appear to exist.
But the largest clue to the claim's lack of credibility came in the form of reverse image searches. The "alien mummy" photograph first appeared online as early as 2008 and in its original incarnation (as a specimen purportedly discovered in Peru, not Egypt) depicted a far less extraterrestrial specimen: The original photograph circulated primarily on web sites outside the United States between 2008 and 2011, when the image was altered significantly to give the mummy a more "extraterrestrial" appearance.
Unfortunately, the doctored photograph proved far more popular than its legitimate counterpart. Due to the age of the original photographs, much of what was published about that particular mummy had long disappeared from news web sites, and few unaltered iterations of the original now populate search results. Some social media clues remain, however: A bit more digging reveals that the mummy was covered in the news in 2007, after the Saint Louis Science Center (SLSC) got hold of a specimen that was originally acquired by a dentist back in the 1900s:

Washington University scientist Charles F. Hildebolt got an intriguing phone call. A mummy had turned up in the storage facility of the Saint Louis Science Center (SLSC), but no one knew much about it. Could he and his colleagues do some detective work to learn more?
"When you hear the word 'mummy,' you think big box or large tomb," says Hildebolt, DDS, PhD, a dentist and anthropologist in the Department of Radiology. "It was a surprise when we got over there and found that this was a small child, partly unwrapped and in a little pine box. We said, 'Wow! This is really interesting.' But we didn't know exactly what we'd be able to find out."
At the same time, they made a bit of scientific history. Although the record of child mummies in existence is still incomplete, they are "exceedingly rare," says Hildebolt. The extensive research they have done to understand this one may well rank, he says, "as the most extensive work ever done on a child mummy."
What information they had when they began came from SLSC records. Around the turn of the last century, a dentist from Hermann MO was traveling in the Middle East when he acquired the mummy as a keepsake. Back home, a niece eventually inherited it, and she brought it out for display on Halloween. Her family donated it to the SLSC in 1985.
For two decades, the small mummy remained in the SLSC storage facility until new vice president Al Wiman noticed it in 2006. "The first thing I asked was 'What do you know about it?' Well, they knew it was a boy," he says today. "'Do you know anything else?' No, they didn't.

At the time, initial testing revealed only a few facts about the circumstances under which the child was born and died:

With funding from the SLSC, university researchers sent another swatch of wrapping to a laboratory for radiocarbon dating; with 95 percent certainty, the results showed a close match. This baby lived sometime between 40 BC and 130 AD, at the end of the Macedonian-Egyptian period of control and the beginning of Roman rule under Caesar Augustus.
"So this child could easily have been alive at the same time as Cleopatra, Marc Antony, Julius Caesar and Octavian," says Hildebolt.
To trace the baby's roots, they contacted Washington University geneticist Anne M. Bowcock, PhD, who enlisted researcher Li Cao, MD, to help retrieve and analyze DNA. Targeting the mitochondrial DNA, they amplified and sequenced their samples, checking the results with Douglas C. Wallace, PhD, of the University of California-Irvine, a mitochondrial expert. Next came a major surprise: This kind of DNA, provided by the maternal side, showed that this child's mother came of European lineage — perhaps a Roman or Greek living in Egypt. So far, the researchers have not been able to amplify the child's nuclear DNA, which would show the father's lineage. 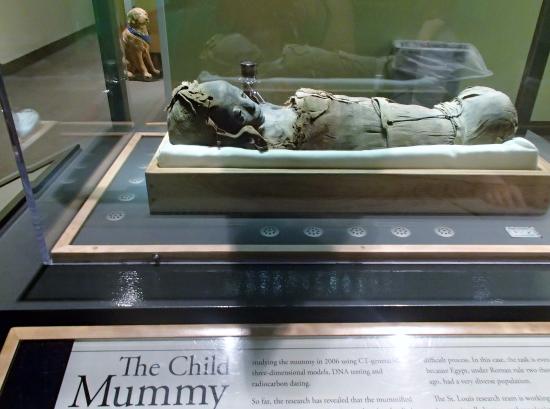 This photo of Saint Louis Science Center is courtesy of TripAdvisor
As is often the case with fabrications of this nature, the real story of the child mummy is more compelling than the made-up tale of the alien mummy.
We contacted the SLSC and confirmed that the child mummy exhibit remains a permanent fixture at that center, ruling out the possibility that it has escaped and assumed extraterrestrial form.

» French egyptologist discovered an ‘alien mummy’ in a secret chamber in the great pyramid
» Nazca Alien Mummy Update: Eggs found in one of the mummies
» Archaeologists Baffled By 2,000 Tiny Gold Spirals Discovered In Denmark
» Archaeologists find the remains of a ‘lost’, 3,700 year old Egyptian Pyramid
» 3rd Pyramid Found Inside Pyramid of Kukulkan at Chichen Itza