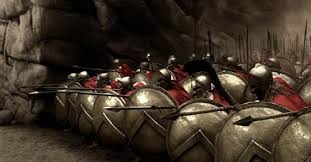 The latest publication by Kevin Annett has led me down an interesting foray into history.  The cover of his new book, Truth Tellers Shield features a plastic Spartan shield and sword sold this time of year by Halloween stores:

This led me to look a little deeper into the significance of the sword and shield chosen for the cover of the book, and this revealed an interesting topic surrounding the concept of the ‘Spartan Mirage’.  The Spartans were documented to have been a unique civilization that was fierce and disciplined and notably devoted to the unity of the state.  All members of Spartan society served a singular purpose which was the survival and superiority of the Spartan warrior.  According to some scholars, it was a society that was built on slavery and abuse of it’s children, to others, it was a society that exemplified strength, fortitude and honor.  This is the basis of the term, coined by Francois Ollier, that is known as the Spartan Mirage.  The ‘Mirage’ is the illusion of Sparta as a Utopian society, a notion that Annett seeks to create himself with his version of a French Revolution and the creation of the Republik of Kanata.  The idea of Utopia is in itself a hotly debated subject matter and is uniquely tied to the concept of Truth in these modern times.

The Truth Movement, was in itself a Mirage, built on the ashes of 9/11 and co-opted by the highest levels of Intelligence Agencies.  If Kevin Annett is the yardstick by which society is to guage the value of a whistleblower, then what do we make of the brave actions of Bradley Manning, Edward Snowden,  Kurt Sonnenfeld , and many others?  How persecuted is Kevin Annett when he is free to fly around the world, to write books, to make YouTube videos and speak on radio programs?  Why does he get away with publishing libellous material about people (often high ranking politicians, law-enforcement officers, and CEO’s) and yet never sees the inside of a jail cell?  How are we to take this ‘book’ seriously when everything Annett has done is in keeping with Cass Sunstein’s recommendation to send “covert agents into “chat rooms, online social networks, or even real-space groups” which spread what he views as false and damaging “conspiracy theories” about the government“.(The Intercept.com)
According to Annett:

Truth Tellers’ Shield is a definitive manual and “how to” guide for anyone who goes up against wrong doing. Written as a practical aid for real and potential whistle blowers, Truth Tellers’ Shield draws on hard experience and street wise knowledge. It teaches the reader how to navigate and survive attacks and smear campaigns by powerful adversaries while surfacing the truth about their crimes.

Like the Spartan Mirage, two versions of the reality of Truth Telling exist.  There is the plastic sword and shield reality that Kevin Annett will sell you where you can sit holed up in your attic making YouTube Urgent Action Alerts of Utmost Importance, or the Snowden/Manning/Sonnenfeld (the real Spartans!) reality that REAL truth telling is dangerous, sacrificial, incarcerating, unrelenting and life changing.
To learn the value of truth-telling, save yourself the 10 bucks and read the following articles:
HOW COVERT AGENTS INFILTRATE THE INTERNET TO MANIPULATE, DECEIVE, AND DESTROY REPUTATIONS
The Art of Deception: Training for a New Generation of Online Covert Operations
http://www.newsweek.com/seth-rich-murder-dnc-hack-julian-assange-hillary-clinton-donald-trump-492084
10 WHISTLEBLOWERS WHO DIED MYSTERIOUSLY