Cannabis Can Decontaminate the Planet

Hemp science is now advancing in leaps and bounds compared to the stagnation of the previous few decades. One significant area of research that is currently receiving particular attention is phytoremediation, or decontamination of soil—although the discovery that hemp leaches contaminants from soil has been known for some time.

For over a decade, industrial hemp growing in the environs of the abandoned Chernobyl nuclear power plant in Pripyat, Ukraine has been helping to reduce soil toxicity. Now, the Japanese are considering following the same course in order to rectify the environmental damage caused by the Fukushima meltdown—however, due to the Cannabis Control Law forced into Japanese law by the occupying U.S. powers in 1948, hemp may only be grown under license—which are highly restricted and difficult to obtain.
In 1989, just three years after the initial explosion, the Soviet administration of the time requested that the International Atomic Energy Agency (IAEA) assess the environmental situation. In the 30km exclusion zone surrounding Chernobyl, high concentrations of various toxic metals including iodine, cesium-137, strontium-90 and plutonium were found in the soil, as well as in plants and animals themselves. 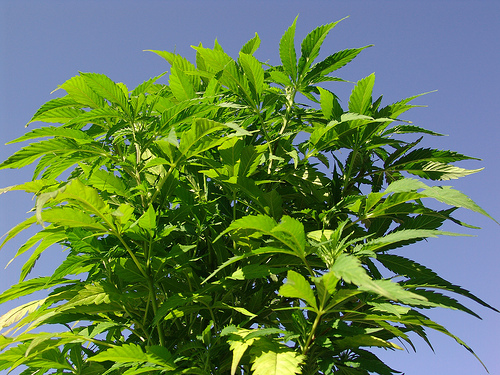 
Which Plants are Useful in Phytoremediation?

In response, it was decided that a concerted effort to reduce soil contamination through the use of beneficial plants would be undertaken. This process, known as phytoremediation, began immediately, and used various plants to take up specific contaminants—two brassica varieties to remove chromium, lead, copper and nickel, maize to take up lead (various researchers have demonstrated the remarkable lead-uptake capability of this important crop), and more recently, sunflower and hemp.
Sunflower plantings began in 1996 subsequent to the development of a variety that promised hitherto unheard-of efficiency of decontamination; hemp plantings soon followed, in 1998. Slavik Dushenkov, a research scientist with Phytotech, one of the organisations behind the hemp plantings, stated that “hemp is proving to be one of the best phyto-remediative plants we have been able to find”.
As well as in the Ukraine, much rural land in neighbouring Belarus was affected by the explosion, and authorities there are also pursuing the use of hemp as a decontaminant. The harvest produced will be turned into ethanol, as increased production of biofuel is a key target for increasing the overall economic and environmental health of the region. 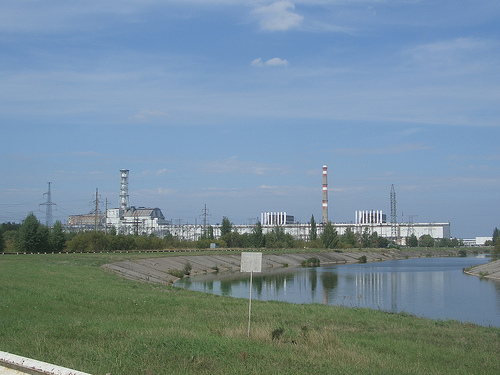 The Chernobyl exclusion zone, site of the world’s worst nuclear disaster, is slowly being returned to health as plants and animals begin to reclaim the land

Differences in Metal Uptake From Soil

In 2012, a Romanian study investigated the nutritional safety of hemp seed produced from plants grown in soils rich in calcium, magnesium, potassium and iron. The study determined that five distinct Romanian hemp strains developed different nutritional profiles according to uptake of the various metals in the soil. For example, the Zenit strain exhibited highest rates of calcium uptake, while the Armanca absorbed least calcium; the Diana, Denise and Silvana strains absorbed magnesium at the highest rates, and the Zenit variety showed the highest concentrations of iron.
Despite the differences, the seeds and oil of all five strains exhibited high levels of magnesium, calcium, iron, manganese, zinc and potassium, all highly beneficial dietary metals. However, all varieties also tested above the safe legal limit for cadmium, a toxic heavy metal that may cause various health complications—despite the soil being within the safe limit for cadmium concentration. The Armanca and Silvana strains showed particularly high cadmium levels.
Hemp and Cadmium Absorption

Excessive consumption of foodstuffs high in cadmium can lead to joint and bone deformities, respiratory illness, anaemia, and kidney failure. In areas where cadmium is present in the soil, in order to be safe for human or animal consumption, hemp varieties should be selected on the basis of poor cadmium uptake.
According to a study into Chinese hemp strains conducted in 2011, many hemp strains have the ability to absorb and accumulate even large quantities of cadmium in soil without detriment to the plant itself. While this does throw up various implications for selection of sites for cultivation of food-safe hemp, it also indicates that cadmium-contaminated sites will particularly benefit from phytoremediation schemes that make primary or exclusive use of hemp. Furthermore, even if hemp used to decontaminate soil is unsafe for consumption, it can still be used in a number of industrial applications, such as for biofuel. 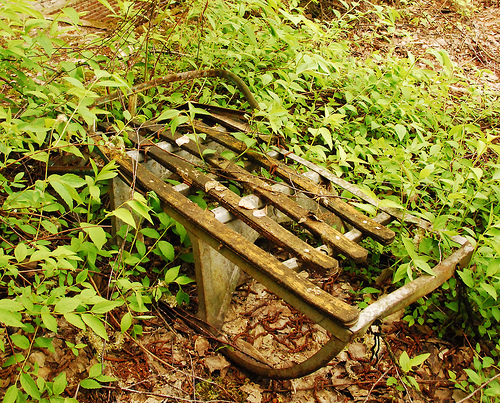 Hemp is Mostly Unaffected by Heavy Metals in Soil

Hemp’s resilience to contaminants in soil is well-documented. Even as early as 1975, a study published in the Agronomy Journal described how soil characteristics influenced elemental uptake and could even affect final cannabinoid profile in psychoactive strains. To illustrate this, fifteen sites with varying soil profiles were planted with the same strain of Afghan cannabis, and their harvests tested for metal content. Researchers concluded that differences could be used to determine geographic origin of cannabis through foliar analysis.
In 1995, the Polish Institute of Natural Fibres released a study demonstrating that tested varieties were able to withstand high levels of heavy metals in soil without impacting plant growth, yield or fibre quality. However, little research has been done into the safety of using fibres in clothing or other forms of industry, and this issue must be investigated fully in order to establish the possible uses for hemp grown in such conditions.
As a proven, valuable tool in the fight to repair human-inflicted damage to our soils and ecosystems, hemp could potentially benefit hundreds of thousands of sites across the globe—it is estimated that in the USA alone there are 30,000 sites requiring remediation. As is so often the case, US restrictions on hemp cultivation preclude any large-scale operations from being implemented, and the contaminated sites are largely left unremediated, through lack of both funding and interest on the part of the government.
From Sensi Seeds @ https://sensiseeds.com/en/blog/hemp-decontamination-radioactive-soil/

Are we ready to fully legalize hemp?

Hemp is one of the most versatile plants on earth. I once heard a statistic that hemp can be used to make up to 25,000 different things. I didn't personally see the list, so I don't know the accuracy of that claim, but I think it's safe to say that hemp is amazing.

Hemp used as a decontaminate

Hemp is very efficient at pulling heavy metals from soil. It's what helps it grow so hearty and so quickly. Trees take decades to harvest, whereas hemp only takes months.

Because of hemp's ability to pull metals from the soil, it can be used very effectively to clean up areas that are contaminated. One town in Italy (Taranto) is using hemp to clean up a contaminated area that has housed Europe's largest steel plant for a long time.

The steel plant, which opened in 1965, has ravaged the local ecosystem, pumping toxic levels of contaminants into the ground. It is estimated that from 2005-2012 alone, upwards of 11,000 local residents died as a result of health issues directly related to the steel plant.

“A long time ago, a choice was made to sacrifice this part of Italy, jeopardizing the health of the citizens of Taranto and its community and the biodiversity of the two seas,” said politician Domenico Finiguerra, according to Slate. “It was decided to sacrifice this land in the name of Italy’s economic future, supplying its industry with all the steel it needed.”

Hemp has been cultivated near the site of the steel plant for the last five years, with production increasing from 3 hectares to 300. About 100 farmers grow hemp, with the harvest being sold to manufacturers to be made into various products.

Hemp works, so why isn't its use more widespread?

Taranto, Italy is not the first time that hemp has been used to decontaminate the soil. For many centuries hemp was used as a rotation crop because it essentially flushed out the soil so it could be better conditioned for other crops.

Hemp was planted at the site of the nuclear meltdown at Chernobyl, along with various other plants such as sunflower plants. Hemp has consistently proven to be the best plant at decontaminating the soil it is planted in because of hemp's tremendous uptake ability.

Unfortunately, the reason why hemp isn't used more often is entirely for political reasons. It's certainly not for scientific reasons. Hemp is non-toxic. According to an estimate from the movie Hempsters, a person would have to smoke a joint the size of a telephone pole in order to feel euphoria from hemp. To overdose on it is humanly impossible.

The fact of the matter is that opponents have fought hemp legalization at all costs because of the plant's versatility, and the likely dramatic affect reform would have on many industries. It's not coincidence that many of the same people that have historically opposed hemp also come from industries that hemp reform would directly affect.

It's a shame too, because science is clearly on the side of hemp reform. I don't know that I would go as far as some people and claim that hemp will save the world, but I do feel confident in saying that hemp could go a long ways in helping improve the world in many ways.

Why are we still obeying these insane beings who think they own everything and everyone?  Now is the time to make our own way and not be controlled by anyone!!

Let's take back our sovereignty and our sanity!!

» Cannabis: The Most Important Vegetable on the Planet
» Cannabis Saved Our Granddaughter’s Life, So We Donated $33.7 Million to Medical Cannabis Research
» Confession of a Doctor Who Drank Cannabis Oil: “I Had Cancer, Cannabis Oil Brought My Life Back”
» Cannabis Paste V.S Cannabis Oil- Alcohol V.S Vegetable Glycerin
» How to make cannabis oil with a Distiller (Cannabis oil cures cancer.MORE at cureyourowncancer.org)