Today at 4:55 pm by RamblerNash

» The Hidden City of Death Valley

» Scientists BAFFLED as GIANT Star just Disappears! OR is something BIGGER Hiding it??

» “Bill Gates We Are Not Your Lab Rats!” Africans Protest COVID Vaccine Trials Among Poor

Today at 1:26 am by RamblerNash

Yesterday at 6:44 pm by Consciousness Of Economic

Yesterday at 6:43 pm by Consciousness Of Economic

Yesterday at 6:42 pm by Consciousness Of Economic

UFO-like objects being struck by lightning over Corsica

UFO-like objects being struck by lightning over Corsica

On September 8, 2016, that night was my last night in Corsica, just before the end of vacations. A beautiful thunderstorm surprised tourists, around 21: 00 pm. A lot of people gathered to witness the huge lightning bolts crossing the dark sky.

As the house I rented was close to this nice place, I quickly took my camera and tried to catch few lightning strikes. 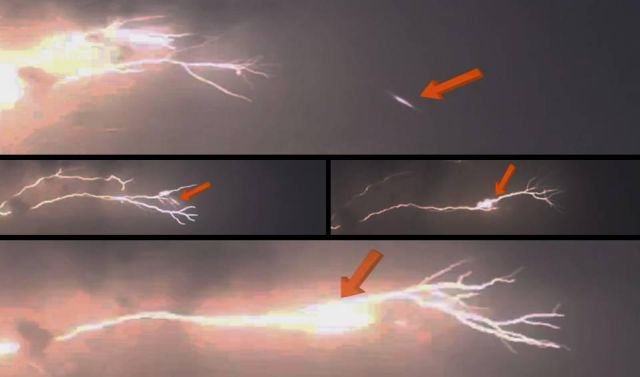 I sat down and put my elbows on my knees to be as stable as possible. I was not looking at the screen while recording, fortunately: I noticed strange lights falling down the sky just after the lightning twice.

Probably some rare ball lightning phenomena, as many said…But I'm not convinced. When I checked my first video, one of the lights seems hit by the lightning, and creates some kind of electric discharge. The object then falls off the sky, and looks like it's burning.

I then noticed two big "explosions" in the second lightning bolt. I first thought "Nothing impressive, probably the lightning bolts, normal pattern". But after viewing the footage in slow-mo, I saw a kind of fast "light" going in the storm direction. The object went straight through the lightning bolt, causing the strange "electrical explosion".

Right now, I can't explain this phenomena, I have no idea of how that is possible. Another explosion of this type is visible at 2:41, but I don't know if it's related to the first one. Who knows. But I'm sure there's a link between the group of lights and this "explosion".

After checking the second video and spotting the same "falling UFO" and four / five other lights aligned above the lightning bolt, I started opening my editing program to type explanations on the videos. When zooming in to show some close ups, I noticed a suspect stationary object next to the storm. On the video, it really looks metallic, due to the lightning reflecting on its side. I'm even more confused about this one. Maybe some type of craft spying the area? Man-made or not, this object is really weird too.

My guess is that the two falling objects are UFOs (any object) hit by the strikes, burning and falling while being consumed in mid-air.