OUT OF MIND » THE INSANITY OF REALITY » GOVERNMENTS & THE NEW WORLD ORDER » Hillary's Secret Hospital?

Just when you thought it couldn't get any weirder. HELL YES IT CAN! READ ON!

[b]A presidential candidate collapses at a ceremony in NYC...and is shoved, unconscious, by SS into a van like a side of beef and rushed off...not to one of the many world-class hospitals and clinics nearby...but to her daughter's $11M apartment.

Sound odd? It did to me.

I discovered that it exactly shares an address with:

For a woman very secretive about her ambiguous medical conditions...whom avoids hospitals like the plague, it occurred to me that when the Clinton's bought this incredibly expensive apt. for their daughter in 2013...they may have also purchased it with the intent of using it as a secret private medical treatment facility for Hillary to use during her anticipated campaign.

To the press...it would only appear Hillary was just dropping in for a visit with her daughter...when, in reality, she is receiving medical treatment and controlled substances from private physicians and private pharmacists...on private property (no need for disclosure).

If so, Chelsea's apt. served it's secret purpose flawlessly this Sunday.

It makes sense that to establish a clandestine medical treatment facility in a residential apartment--one which is legally compliant with the controlled substances dispensing/stocking/delivery & shipping requirements...and one which is able to legally supply and treat a private patient with the drugs needed, one would also have to register the address as a medical treatment facility.

In this case, I would assume the Clinton Foundation would be the controlling entity.

A staff (and private) doctor or pharmacist would then be employed (Hillary has two) to legally treat the patient, practice medicine within the confines of the private residence...and dispense drugs to that private patient without any disclosure.

This sham medical facility, while legally registered as a public care facility...would also have to be closed to the public in order to operate without any disclosure.

What is Metrocare Home Services and why are they located in Chelsea Clinton’s Apartment? 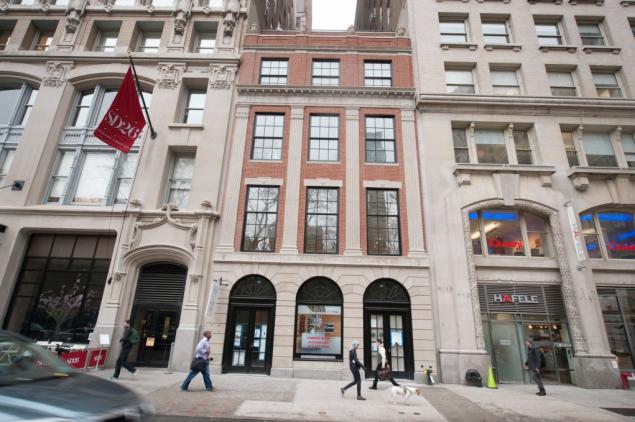 In fact, the Secret Service was going to follow protocol and take Mrs. Clinton to Bellevue Hospital, but several Clinton campaign aides demanded that the ailing Democrat nominee be taken to her daughter’s place.

They have the same address on the same floor and there is only one apartment per floor in the building.

As reported earlier tonight by Free Republic, a real estate description of the Whitman Building apartment states that:

The Fourth Floor of The Whitman features four bedrooms, six and a half bathrooms, a home office and den, and stunning direct Madison Square Park views. A private storage unit is included with the residence. Residents will enjoy top-of-the-line building amenities, including a Full Time Doorman, Residents’ Only Gym, Key Locked Elevator with Private Elevator Landings, and a Refrigerated Package Room.

An Internet search for Metrocare Home Services came up with the following link:
http://www.healthcare.com/profile/metrocare-home-services-inc/

Apparently, all calls to the Metrocare Home Services number are directed to an extension answered by an elderly woman who speaks limited English and no Spanish.

The fourth floor apartment in the Whitman was also remodeled in 2013 by Jeffrey Cole Architects of Manhattan.

Below is a job description:
INTERIOR RENOVATION OF EXISTING APARTMENT #4. ARCHITECTURAL AND PLUMBING WORK. ENERGY EXEMPT, NATIONAL HISTORY REGISTRY USN# 06101.012731. NO CHANGE OF USE, OCCUPANCY, OR EGRESS UNDER THIS APPLICATION.

The remodeling work, costing $40,000 was started in August of 2013, five months after Chelsea and husband, Marc Mezvinsky purchased the 5,000 square foot apartment.

What is a health care services company doing at the exact same location and address as Chelsea Clinton’s apartment?

Is Metrocare Home Services nothing more than a private clinic for Hillary Clinton to receive treatment away from the prying eyes of the media?

What is Hillary Clinton and her campaign hiding from the American people?

The American public deserves some answers from a candidate and a campaign that has been nothing less than completely dishonest and deceptive.

Despite her campaign claiming it was pneumonia that led to her ill health in New York on Sunday, Hillary Clinton was caught on camera receiving a neurological test from someone who appeared to be a nurse.
The image shows Hillary grasping the woman’s fingers with her fist, which is a classic motor neuron test to determine abnormalities in the nervous system.
The NYU School of Medicine details how the test is conducted;
“Test the patient’s grip by having the patient hold the examiner’s fingers in their fist tightly and instructing them not to let go while the examiner attempts to remove them. Normally the examiner cannot remove their fingers. This tests the forearm flexors and the intrinsic hand muscles. Compare the hands for strength asymmetry.”
This is precisely what appears to be taking place in the image above. So why would Hillary be receiving a motor neuron test if she was only suffering from pneumonia, as her campaign claimed?
The explanation that Clinton’s swaying and stumbling in the now infamous video represented a neurological problem rather than her being dehydrated is also a view shared by Dr. Zuhdi Jasser M.D.

OUT OF MIND » THE INSANITY OF REALITY » GOVERNMENTS & THE NEW WORLD ORDER » Hillary's Secret Hospital?