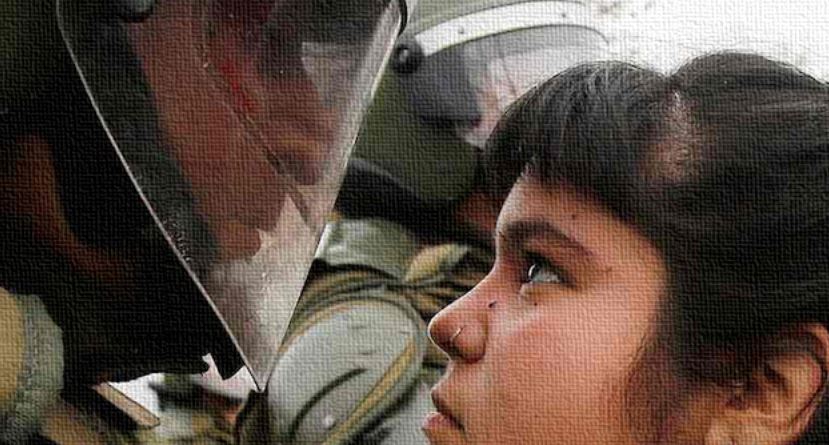 By Dylan Charles
A photo taken in Santiago, Chile freezes an intense moment between a riot policeman and a protester, capturing the compelling power dynamics at play right in the world at large and revealing how these dynamics will ultimately be defeated.
Worldwide resistance to the destructive paradigm of state/corporate dominion over all life on planet earth is taking many forms, simultaneously happening on many battlefields both macro and micro, both outside and inside of the self.
Many of us understand how power can be and is derived from violence, and how thoroughly the present paradigm has seized upon this script to relentlessly control us. But do we understand the nature of our own power? Do we understand how violence can be overcome without brute force?


The universe is held together and pushed ever-forward by the interplay between opposing forces. This is seen in every sunrise and sunset, and also by looking deeply into any aspect of life. It is happening in this photo, do you see it? In the very moment of this picture, a shift is taking place, something of vast importance that is not unannounced, only felt.
The false duality of the struggle and conflict in our world is fully exposed right here, laid bare in unspoken truth, communicated in a language more primitive than words. The confrontation is direct and up-close. So close, in fact, there is unity. Moreover, you have the masculine at odds with, yet connected to, the feminine, who is taking control.

You see here the strong against the weak, the big over the small, the dark face-to-face with the light, the old pitted against the young, the vulnerable versus the entrenched and fortified, the organized challenged by chaos. Courage trumping fear.
We are so entrained to see might as right, but you can see right here in this photo truth is revealed. Power based on violence is a facade, it is a mask covering fear.
In this photo is proof the facade is cracking, it’s in his eyes. And he represents the entire system. This is the exact moment where fear yields to love, caught on camera in a protest marking the 1973 coup of dictator Augusto Pinochet who was deposed in a long and heart-breaking process of resolve. A righteous resolve which is seen clearly in her face. The self-delusions of the wicked are blown apart with her conviction.
Before human communication became verbal it was primal. The creature to be feared now senses fear himself. He now has a decision to make for he has finally seen an accurate reflection of himself in this young woman. He looks down on her in stature, but his submission is guaranteed. 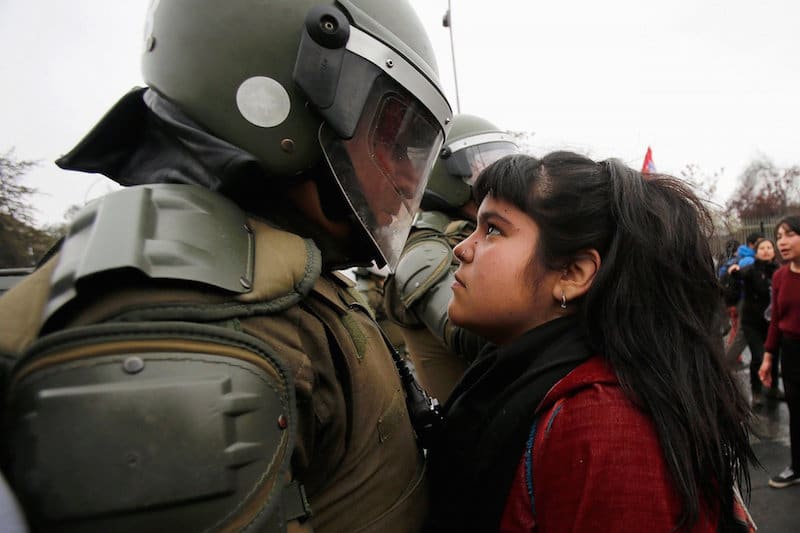 When fully integrated into the still incoherent global resistance movement, the principles revealed in this image will prove invincible against the forces of destruction and inhumanity. They will collapse when they are told to do so.
What more proof do you need that righteous can and will prevail in the end? What more encouragement do you need to never give up?

We are called to be architects of the future, not its victims. ~ R. Buckminster Fuller

Read more articles by Dylan Charles.
About the Author
Dylan Charles is a student and teacher of Shaolin Kung Fu, Tai Chi and Qi Gong, a practitioner of Yoga and Taoist arts, and an activist and idealist passionately engaged in the struggle for a more sustainable and just world for future generations. He is the editor of WakingTimes.com, the proprietor of OffgridOutpost.com, a grateful father and a man who seeks to enlighten others with the power of inspiring information and action. He may be contacted at wakingtimes@gmail.com.
Image Credit: Reuters

» Ship in NASA moon photo disguised as surface of the moon, the perfect camouflage to hide from humanity. UFO Sighting News.
» FINAL FULL MOON OF 2020- A PERFECT END TO A PERFECT STORM
» Life is a Metaphor
» Gold: The Myth, the Metaphor and the Manipulation
» The Fart Metaphor, Bio-Emissions, Negativity and Healing