Scientists, archaeologists and UFOlogists alike have been using the Google Earth software, which has proven a very competent tool, to find relics, unknown geological structures or even signs of extraterrestrial existence. There have been countless theories and even tens of detailed descriptions of a place called Hollow Earth where one or more human or alien civilizations discretely make their living, far away from the savage jungle of our society. The fast growing worldwide interest made UFOlogists actually begin searching for it, using Google Earth.
Searching based on symmetry, they divided the globe in 3 zones and zoomed in on a spot located exactly opposite to the great Giza Pyramids. This exact spot held nothing interesting, but widening the search area and zooming in even closer, the UFOlogists discovered a massive structure, measuring approximately one mile in height, on the bottom of the Pacific Ocean. 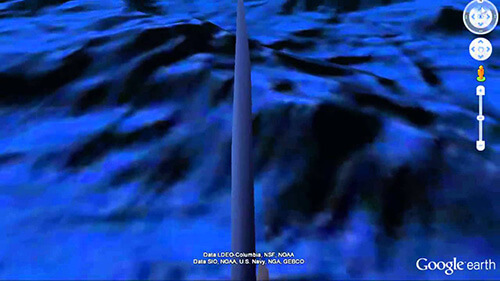 Most believe this tower not to be a natural structure, simply because nothing even close to it has ever been discovered on our planet.
For firm believers of the Hollow Earth theory, this was the final proof they needed, not only of its existence, but also the location or pathway. They geologically inspected the tower’s surroundings, and found something looking like a layer, a very large gap somewhere deeper than the ocean floor.
This so called layer is said to be similar, more or less, to what people who claim to have visited it describe. These people also claim that the race inhabiting inner Earth don’t really hide there, but have chosen to come out very rarely, which probably means they do so in order to study us and not for resources (We didn’t believe that Earth was going to run out of resources soon anyway).
Hollow Earth theorists and UFO encounter believers don’t normally agree. This case is a rare exception, and for completely different reasons. UFO researchers don’t really believe in the existence of another, slightly different or more advanced human race, but they have always accepted the possibility of inner Earth.
More than 95% of the world’s seas and oceans are entirely unexplored and most of the globe is covered in water, so mankind only knows very little about the planet it inhabits. What geological structures or life forms lay in the vast unknown areas might be beyond human comprehension. The possibilities are endless.
Also, people normally think of UFOs as pure aircraft or spacecraft. But if aliens could travel through space then a UFO would have no problem whatsoever submerging and navigating the oceans just like a submarine. UFOlogists now believe this tower to be part of a global network of such gigantic structures, used by ancient advanced civilizations (human, alien, or both) to transmit and receive large amounts of energy through great distances, or as some would say, from one side of the Earth to another.


Tesla also came up with a similar theory about transmitting the energy through air, proving it possible, but researchers who believe the ancient Egyptians, Mayans or Sumerians mastered this technology are still not being taken seriously.
No country has yet to make an official statement on this discovery, which seems a bit odd, let alone send an exploration team (at least not officially). So here are the exact coordinates if you want to take a look yourself on Google Earth. Let us know what you think:
32 ° 30’07 .74 “S 149 ° 52’46 .51” W
Source