Gaia, The Great Galactic Map Will Improve Our Knowledge Of The Milky Way

The Gaia mission team is about to unveil its catalogue of celestial bodies in our galaxy. This colossal inventory will chart the positions and luminosities of over 1 billion objects in the Milky Way and beyond.

This program represents a giant leap in our knowledge of space, and a great stride forward for surveyors of the cosmos. On September 14, the team from the European Space Agency’s Gaia mission has issued a preliminary version of its catalogue.
It shows 1.2 billion stars, giving their exact position in the celestial vault as well as their magnitude. This is an unprecedented feat of astronomy.

The return of astrometry

Launched from the Kourou base (French Guiana) on December 19, 2013, the Gaia satellite is entirely dedicated to astrometry. This branch of astronomy, which dates back to antiquity, deals with measuring the position and motion of the stars. It is astrometry that tells us with certainty that the stars visible in the sky are not simply points of light fixed in immutable positions throughout the heavens, but that they are in fact moving material bodies, located at gigantic and variable distances from Earth. Without knowledge of the distance of such objects, astronomers could not assess their luminosity, true or intrinsic, and thus analyze certain of their physical properties. If we accept that the energy radiated by the stars depends upon their mass and age, then everything we know about the diversity of the stars scattered throughout the cosmos is in fact ultimately derived from this discipline.
Although triumphant in the 17th and 18th centuries, astrometry subsequently fell out of favor due to its instrumental limitations. The highly complex measurement of trigonometric parallax of the stars, the only method by which their distance may be measured accurately, in fact turned out to be too imprecise due to interfering effects of the Earth’s atmosphere. In 1989, the launch by ESA of Hipparcos, the first astrometry satellite, demonstrated the key role of this discipline to advance modern astrophysics. Compared to the catalogue of Greek astronomer Hipparchus from the second century BCE, which contained 1000 references, that of the Hipparcos mission, published in 1997, contained 100,000 references, to which 2 million other stars were subsequently added.

More than a simple inventory

With Gaia—and with an inventory of a billion plus celestial bodies—the task is not simply to log their position and their displacement in the heavens, while measuring their distance from us, but also to establish for 150 million stars the speed at which they are moving either towards or away from the Earth. The objective is to have a large sample for each family of stars, making it possible to study each of these stellar populations separately.


“this enormous repository will make it possible to improve our knowledge on the structure and dynamics of the Milky Way.”

Gaia is also expected to provide details on the orbits of hundreds of thousands of asteroids and detect the presence of thousands of exoplanets the size of Jupiter. Furthermore, it should help identify millions of double and variable stars and tens of thousands of “brown dwarfs.” The mission will go beyond our galaxy to take into account no less than 6000 supernovae and 500,000 quasars.
By accurately dating the different subparts of our galaxy and bringing to light new information on the dark matter around it, this enormous repository will make it possible to create a 3-D map to improve our knowledge on the structure and dynamics of the Milky Way. It may also be used to test some of the principles of General Relativity. 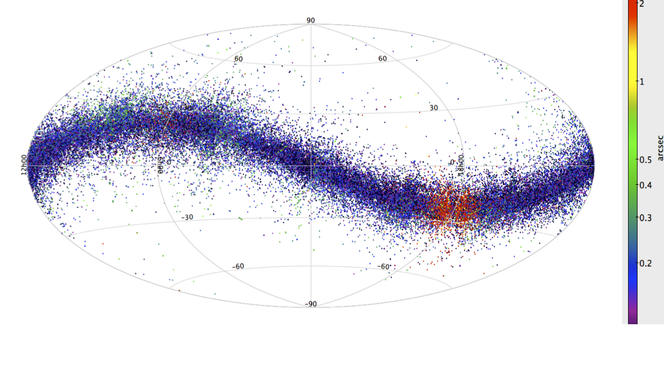 Map showing all the asteroids detected by Gaia during 8 months of observations.

An instrument of unprecedented precision

To achieve this goal, the Gaia team was able to rely on the exceptional quality of its satellite. Designed and built by the company Astrium Satellites with the participation of numerous European subcontractors, this two-ton spacecraft is fitted with two telescopes aimed at different parts of the sky and separated by a constant angle of 106.5°. The 106 high-performance image sensors provide Gaia with enough sensitivity to pick out stars 400,000 times dimmer than those visible to the naked eye. 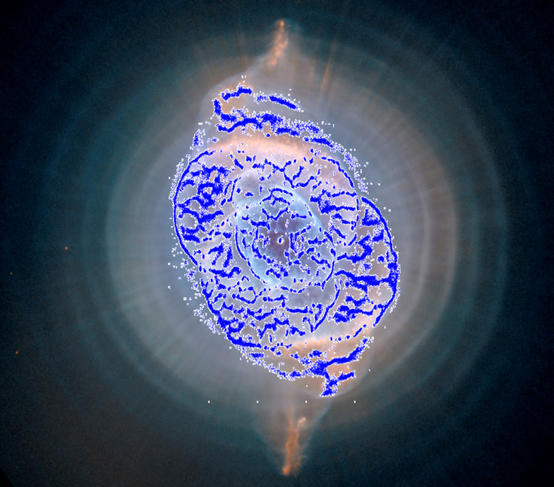 Map of the 84,000 stars detected by Gaia in the Cat’s Eye Nebula (NGC 6543).
By following the trajectory of Earth, Gaia sweeps the entire sky. Using its three instruments (astrometric, photometric and spectrometric) it will perform systematic analysis—up to 70 times throughout its mission—of light from each of the brightest stars in the heavens. Gaia is thus generating enormous quantities of data, which, once received on Earth, are scrutinized by a scientific consortium, the DPAC (Data Processing and Analysis Consortium), comprising 450 engineers and astronomers from 25 countries, with 100 or so working in French laboratories. “This massive amount of information, expected to represent about one petabyte (pB) by the end of the mission, is divided among specialist groups and processed before undergoing validation by a scientific committee,” explains Frédéric Arenou of the GEPI laboratory, who oversees the validation of results.

The catalogue unveiled in September is the result of the work undertaken by this network, which also involves the CNES in France. Based for now only on observations made between July 25, 2014 and September 16, 2015, it contains only part of the data that will be unveiled in the final version of the Gaia Catalogue.


“The inventory contains only part of the data that will be unveiled in the final version of the Gaia Catalogue.”

Indeed, some parameters such as the distance and proper motion of stars and the list of double stars, asteroids and exoplanets require the comparison of a number of different observations over time. These will only become known when DPAC publishes future findings.
The current results remains an incredible accomplishment given the difficulties faced by the mission. “In the days following the launch on December 19, 2013, the team had the unpleasant surprise of discovering defects in some of the satellite’s systems,” explains François Mignard, member of the ESA Gaia Science Team. These included the presence of parasitic light in the CCD matrices, slight lens distortion and unexpected condensation. These different problems delayed the scheduled mission calendar by three months, but did not impair seriously the performances.
Yet the mission is already a success. The Gaia catalogue maps out the position of no fewer than 1.2 billion stars and 250,000 quasars or active galactic nuclei with an unprecedented precision of a few milliseconds of arc (equivalent to the angle at which a one-euro coin would be seen at a distance of 4000 km), which is 100 times more precise than anything achieved to date. For each of these objects, the magnitude or apparent luminosity has been calculated.
And the incredible levels of performance do not end there. The Gaia team decided to implement an ad hoc program, christened TGAS, in order to supplement its catalogue with data obtained by the Hipparcos satellite 25 years earlier. In this way, it was able to calculate for the first time not only the speed of displacement of these stars in space, but also their distance. In a single year of observation, there has been a 20-fold increase in the number of celestial objects with known characteristics.
Truly a Gargantuan appetizer for astronomers, pending release of the next dataset from the Gaia mission, currently scheduled for late 2017.
Source: CNRS