Establishment Churchianity bumps into itself at Havana airport 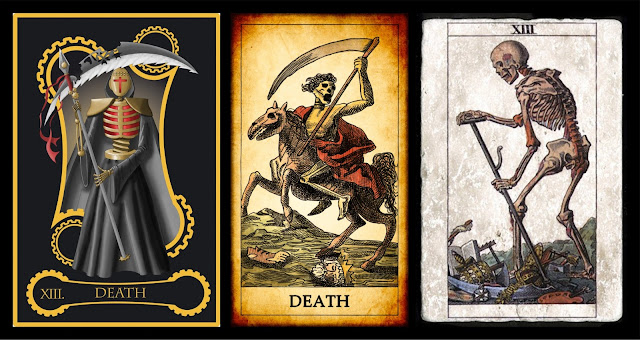 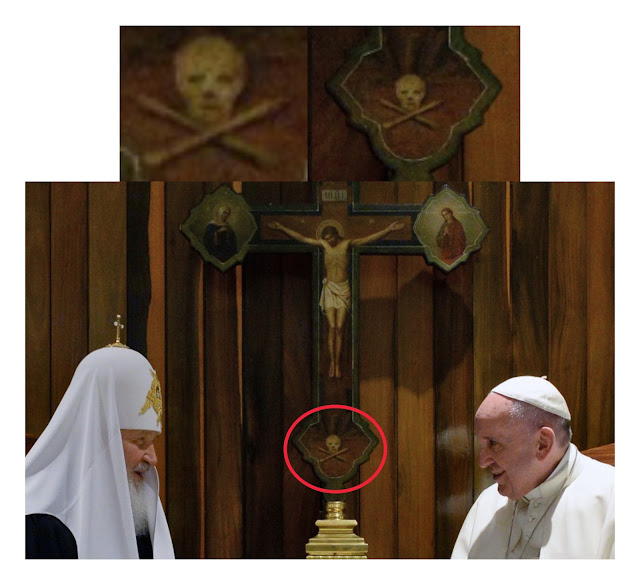 The Great Schism between Western and Eastern Churchianity began in 1054 CE. It ended in 2016 CE.

The two church leaders did not meet at a basilica in Rome (Italy), or in Constantinople / Istanbul (Turkey), or in Moscow (Russia). They chose to meet at Havana airport (Cuba), which they described as "the crossroads of North and South, East and West."

The meeting and its documents were prepared in minute detail, long in advance. Nothing in the arrangements was left to chance. The offices of Kurt Koch (a Vatican cardinal) and Grigoriy Valerievich Alfeyev (Metropolitan Hilarion of Volokolamsk) took the lead in coordinating the encounter and its public presentation to the world's media.

There has been much comment about the photographs officially circulated to the media by the Vatican. One such picture is above. Another is here (EPA stands for European PressPhoto Agency). These photographs were planned with clear symbological intent. What the photographs show was intended to be seen.

Note the skull and crossbones which features prominently at eye level between the two men. What is that supposed to be about?

First of all, it is not a skull. It is a head. The head is skinned over and the nose is intact. There is even a hint of hair on the sides of the head. Images of traditional skulls and crossbones (as here) commonly consist of an empty human skull with two crossed human femurs (thigh bones); no skin; no protruding nose; no hair.

Second, it is not unusual to find such a symbol on the lower part of a Roman Catholic crucifix (other examples here).

The two men did not have to use this symbol as a background. They could have had a plain wall behind them, or a Russian Orthodox icon, or anything. This was a pre-planned photo-opportunity. The substantive talks themselves, said to have lasted two hours, took place elsewhere in Havana airport, in private.

So, what have we got? Two prominent ecclesiastical office-holders, both having had recent meetings with the Russian President, Vladimir Putin, engage in an historic, public reconciliation with a third head between them, centre picture, at eye level. The two men look at each other; the third head looks out at us, the watching global audience. Beneath the third head is a saltire (diagonal) cross (the "crossbones").

There is a portentous pack of equivocal, overlapping and shifting symbols to consider here: death; the number thirteen; skulls and crossbones; Chi-Rho monograms; the saltire cross.

Most modern people, attendant to popular Western culture, would assume that the skull and crossbones is a negative image of death, piracy or poison. And they might also assume that the number thirteeen is unlucky.

In the Tarot deck of cards, used in divination and fortune-telling, Card Number Thirteen is Death. If chance deals this to you, you shudder. Some images of the Death card are shown higher up on this page and in the clickthrough collage underneath.

In the last thousand years or so in the West, the skull and crossbones has come to be associated with the tribal symbolism and inauguration ceremonies of quasi-secret societies: the Knights Templar, the Knights of Malta, the Jesuits, the Freemasons.

Because the Knights Templar were the bankers of Crusade-era Churchianity, and because their treasure ships flew that flag, the skull and crossbones has also become associated with piratical banking.

But is there an esoteric blind in play here? Might the number thirteen and the skull and crossbones have a different resonance? Could they, indeed, carry an exactly opposite energy?

Death, if it exists, need not be a bad thing. Those who have coherent memories of past, future and parallel lives sometimes comment how much easier, in their experience, they have found it to "die" than to be "born".

To die can be an ecstatic release; a return to the welcoming light of the mothership; an invigorating expansion back into the higher, less constrained, dimensions.

In contradistinction, to be born, to take a physical incarnation among the surface human population on Earth, is to leave the expansive freedoms of the higher dimensions (33 of them, probably, in this local universe of ours) and to be packed tight into a meat-and-bone capsule of a body which only offers you three dimensions of experience and wriggle-room when you are in normal waking consciousness. On this view, dying is easy; being born is not.

Death and the number thirteen can be thought of as having to do with positive transition, surrender to personal change, and benevolent recycling. Thirteen is the number of change; the number of transition; the number of necessary upheaval, enabling new ground to be broken and a fresh start to be made.

The number thirteen is also the number of the cross. In an upright Calvary cross such as is illustrated behind Kirill and Francis in Cuba, or on the visor of the Tarot card figure shown at the top of this piece, the patibulum (crosspiece) is near the top of the stipes (upright). The lower (longer) part of the upright is 1 and the three shorter sections at the top are 3; thus 13.

The Calvary cross is the Golgotha cross. Jesus of Nazareth is reported to have been crucified at a place just outside the city walls of Jerusalem called Golgotha; an Aramaic word meaning “the skull.” Calvary is a Latinised form of the word Golgotha.

With the diagonal cross, the saltire, which features in the skull and crossbones symbol, the numerology is similar, but Roman: XIII (13). The two femurs are crossed (X) and there are three components in the symbol: one skull and two bones (III).

The saltire cross of the skull and bones is also the saltire cross of St Andrew, the Patron Saint of Scotland. The modern-day Scottish flag has a white diagonal cross on a blue ground (as here). In another adventure, St Andrew is said to have founded Kirill's Russian Orthodox Church.

Early Christians employed the Chi-Rho monogram as the symbol of Christ. Chi and Rho are the first two letters (ΧΡ) of Christ in Greek (ΧΡΙΣΤΟΣ; Christos). Sometimes this symbol is called the Monogram of Christ, or Chrismon, or Labarum.

However, the symbol is also found elsewhen, thousands of years before Christianity arose. Chi-Rho was the emblem of the Egyptian god, Horus. There is a symbological link here, connecting Horus the saviour with Christ the saviour.

The Ptolemaic Greeks called their version of Horus, Heracles (or Hercules) and applied the Greek XPHΣ (Chres) to him. This gave the ancient Horus the title of Lord Chrestos and then, inevitably, Christ.

Chi also had another meaning: Great Fire, or Light, or Shining. And Rho stood for Pater or Patah (the Egyptian god, Ptah), which is Father. Together, therefore, they make Shining Father (Dyaus Pitar). Sky Father is another version.

So, it might be argued, the Skull and Crossbones and the Chi-Rho monogram, and the universal number thirteen, trace an esoteric trail back to the ancient Shining Ones who first incarnated on Earth. Osiris was the Egyptian version of the original Shining Father.

Sometimes, two other Greek letters were incorporated into the Chi-Rho monogram (as here). They were Alpha (Α or α) and Omega (Ω or ω); the first and last letters in that alphabet.

Their incorporation into the symbol had, for Christians, a scriptural resonance: "I am Alpha and Omega; the beginning and the end; the first and the last."

Thus has The Christ, The Shining Father, The World Teacher always spoken.

Not a scripture, but perhaps more widely read in recent decades, the opening line of George Orwell's dystopia, Nineteen Eighty-Four, reads: "It was a bright, cold day in April, and the clocks were striking thirteen." An esoteric reversal is tempting here: The obverse of a dystopia is a utopia. Flip the coin and you have the potential for a new Golden Age.

So, armed with this Heath Robinson-like contraption of equivocal symbologies, can we say what Kirill and Francis were trying to signal with their skull and crossbones image in Cuba?

It might have been very simple: The current world order is finished. Separateness is finished. Capitalism is over. The Shining Father has returned. We have met him. Vladimir Putin and others have met him. The time has come to share the abundance of the planet equally among all.

Our task, together, is to bring Heaven (North), Earth (South), East and West together into an equipoise of transparent unity. Thus, together, we can initiate a new Golden Age of justice, peace and shared prosperity on the planet. 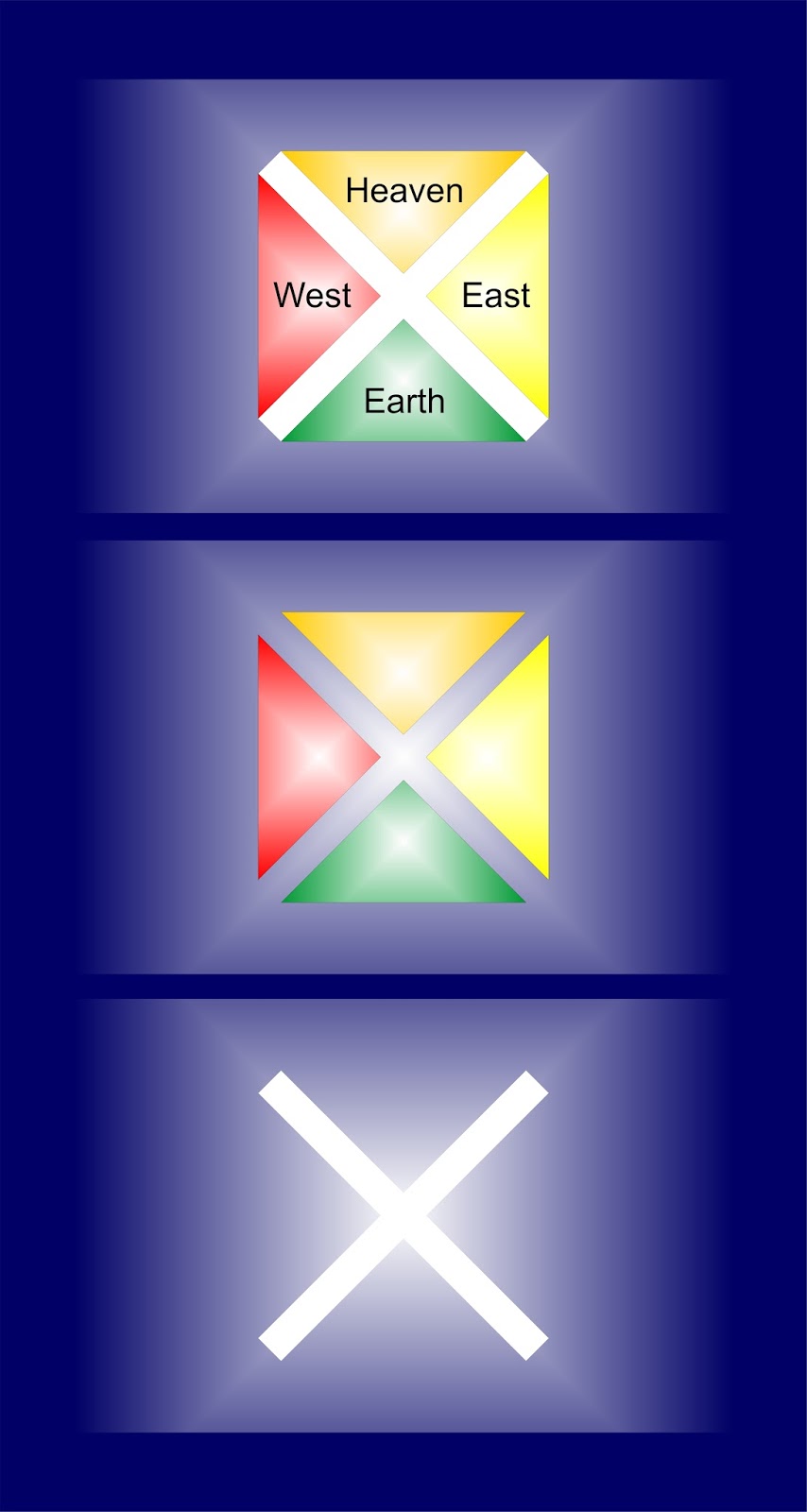 » Benjamin Fulford: Feb 8, 2016: First meeting between Pope and Russian Patriarch in 1000 years...
» UNPRECEDENTED: POPE FRANCIS, RUSSIAN PATRIARCH KIRILL MEETING TO HEAL 1000 YEAR RIFT
» Kevin Annett – Evidence Ratzinger is acting Pope; “Pope” Francis is PR front; Pope & Cardinals are a Satanic Coven
» The Prophecy Of The Popes: The Next Pope (Petrus Romanus) Will Be The Final Pope According To A 900 Year Old Prophecy By St. Malachy By Michael, on February 13th, 2013
»  IFrame Pope John Paul II was canonized as a saint alongside Pope John XXIII, on April 27 by Pope Francis. What a bunch of lies and EVIL they hide behind....Watch and listen to all these videos and you will learn much. How evil the Vatican is and they we