OUT OF MIND » THE INSANITY OF REALITY » GOVERNMENTS & THE NEW WORLD ORDER » BREAKING BOMBSHELL ! FBI NYPD INSIDERS LEAK - Email Scandal About To Take A SICK And TWISTED Turn

The following is a compilation of reports associated to the latest leaks about Hillary Clinton's involvement with pedophile sex. There are now multiple sources from the FBI and NYPD confirming Hillary Clinton's massive crime syndicate in Washington DC.  Is this the take down of the cabal taking place right in front of our eyes or is this a disinformation campaign?


Published on Oct 31, 2016
All of the following information was given to us by our insiders who have specific first-hand knowledge of the Hillary Email scandal. It seems that things are about to heat up. We are told that of the 662,871 emails lifted from Weiner’s computer, 11,112 emails are Huma… and pay to play- including Saudis and Israeli’s. Meaning Huma was the one Hillary USED to communicate with foreign leaders via email for inside information and deals via Huma’s computer.
http://victuruslibertas.com/2016/10/i...

All of the following information was given to us by our insiders who have specific first-hand knowledge of the Hillary Clinton email scandal. It seems that things are about to heat up. We are told that of the 662,871 emails lifted from Anthony Weiner's computer, 11,112 emails are Huma Abedin's… and pay to play – including Saudis and Israelis. Meaning Huma was the one Hillary USED to communicate with foreign leaders via email for inside information and deals via Huma's computer.

It has been established through many avenues, but mainly through Wikileaks, that the Clinton Foundation was just a farce set up in order to perform pay-to-play games with multiple entities, including foreign nations. Pay-to-play nations include: Israel, Saudi Arabia, Turkey, Qatar, Kazakhstan, and the Ukraine.

Furthermore, we are told by one of our insiders that one email unequivocally confirms ISIS was created by CIA and Israeli Secret Intelligence Service, with help from Joe Lieberman, John McCain, and Lindsey Graham!

An NYPD insider said the content they viewed did include State Department TOP SECRET emails. One file was called "Life Insurance". A second file was titled "DNC Nuclear Arsenal".

A third file I'm sure Hillary definitely DOES NOT want released was a file labeled "Intimate"… according to this NYPD insider, this file contained X-rated photos of Huma and Hillary with a TEENAGER.

NYPD detectives were sickened by what they saw, according to our insider, and they had threatened FBI field agents that they would leak this information, if the FBI did not "step up and take off the kid gloves". At that point, 13 of the FBI agents in NYC were also threatening to leak the information.

As you can imagine, the scandal has the entire Obama Administration in full panic. We are told there are emails that could send Loretta Lynch to prison, as well as Bill and Hillary. The Twitter post below, our sources sent us, verifying it is all true: 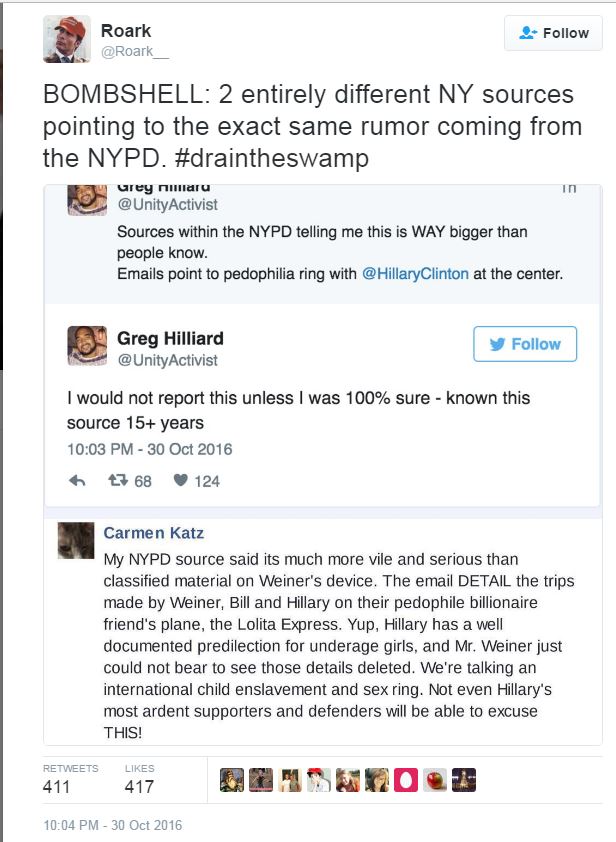 The following information comes straight from an FBI Anonymous source, who is the senior analyst who posted on 4chan in early July of this year:

Jim Comey learned that some of his own investigators were tipping off both Loretta Lynch and Bill Clinton, thus making his job impossible.

Comey sent a letter to Congress, knowing that ultimately it would expose Loretta Lynch as a dirty actor and the breadcrumbs would lead directly to Obama. The State Department is terrified now. Comey has assembled a small team of 40 agents, whom he has declared "The Untouchables" after the famous federal agent Eliot Ness.


Comey has clamped down on all FBI agents and he expects a full-scale war between the FBI and the Department of Justice (DOJ), the White House, and the State Department. He has confirmed and understands that many sitting senators, congressmen, lobbyists, and power players are going to be indicted and prosecuted. One of the main targets of the probe is the Clinton Foundation and Clinton Global Initiative. Among the targets under investigation are John Podesta, Huma, Cheryl Mills, CNN, ABC, NBC, etc.

As it turns out, Weiner, Huma's husband, had been forwarding Huma's emails each time she came home and left her computer open. Huma appears to have been in touch with Saudi actors, and therefore, ESPIONAGE is strongly suspected.

Comey and his 40 "Untouchables" are now preparing to take down the largest corruption ever witnessed in American history… which is what I think MUST happen if Comey is planning to stay part of the FBI. He lost so much respect and so much credibility with the first Hillary investigation, it would take something of this magnitude to allow him to face the public again.

The Pentagon has internal players and outside players they call "creatives". Creatives are civilians who tend to be geniuses, malcontents, extreme hackers, or otherwise demonstrate brilliance in other useful areas. A Pentagon program called Cicada 3301, which we have reported on previously, was created by several of these talented civilians. The program is now used to allow thousands of honest government people to report on their corrupt superiors, using what is called a DEAD BOX whistleblower encryption method so the non-corrupted government officials can report corruption and still remain safe.

I've heard it said "A vagina almost took down Bill, now will a Weiner take down Hillary?" LOL!

Again, thank you to all of the insiders, the whistleblowers, the good FBI agents, the good CIA agents, the good NYPD officers, and the non-corrupted government officials who want to see the truth exposed! Without these brave, wonderful, and morally erect individuals, our country would still be in the corrupted darkness.

• Kevin Spacey – actor in House of Cards. People tell me Spacey is gay, and my response is "Have you ever heard of the word bisexual?" Spacey is very good friends with 2 big-time pedophiles: Jeffrey Epstein and Bill Clinton. Spacey, big Hollywood star, has 3.78 million Twitter followers.

• Alan Dershowitz – longtime friend of Epstein, as well as one of his defense lawyers. Dershowitz was the one who negotiated that absurd plea bargain for Epstein that gave him a 13-month (served) sentence and a 16 hour/day day pass so he could spend most of his time in his mansion. Epstein sex slave Virginia Roberts has said that Epstein made her have sex with Dershowitz numerous times. The real question is how many other underage girls was Dershowitz having sex with? Virginia Roberts says Dershowitz also witnessed Epstein's pedophilic activities.

The Situation Is So Intense, It Involves the Entire US Government | FBI Insider

*EXPLOSIVE* Q & A on the Clinton Foundation - FBI Insider on 4chan /pol/ : "Ask Me Anything About the Clinton Case" - George Soros Is the Kingpin - Follow the Rothschild Thread - Clinton Foundation Uses People as Currency - Jeffrey Epstein's Child Sex Trafficking Network - Bill & Hillary Clinton Get Paid in Money & Children - Hammer HRC's E-mails, Dig Into the CF: Post Everywhere You Can

BREAKING: SEARCH WARRANT LEADING TO RE-OPENING OF CLINTON CASE WAS FOR CHILD PORNOGRAPHY

Kent Dunn Speaks of a lot of Inside Information about Coruption in US GOV to Spread Abroad !

This update is in regards to the private emails of Hillary Clinton and Huma Abedin found on the computer of Huma's pedophile husband, Anthony Weiner.

The files in the folder named "Life Insurance" contained emails that revealed bombshell evidence that Hillary Clinton and Huma Abedin are running a pedophile sex ring.  Out of the 650,000 emails on Anthony Weiner's computer, 11,112 emails are specifically related to Huma.

Kent Dunn says there is information regarding the true founders of ISIS terrorist group.  ISIS was created by the CIA in collaboration with the Israeli Mossad. The inventors of ISIS are Joe Lieberman, John McCain, and Lindsey Graham.


Speculation now is that the FBI and Department of Justice are now in an internal war about the leaks of the new emails found on Huma's and Anthony Wiener's computer.   Many people are connected with the latest email scandal as the Obama administration personnel were using private emails servers outside of the sanctioned government servers.  They were passing classified information though private emails.  Senators, Representatives, and lobbyists, including John Podesta, and Huma. The emails revealed that they were communicating with media broadcast companies NBC, ABC, CBS for the purpose of denying the American people from using the Freedom Information Act/ FOIA Requests of the private emails from Hillary and Huma's computer.  The whole thing is setup under a code name called "SOCIGA3301".

Kent Dunn: Sir what is going to happen with the election?
Military Colonel: "When we're done, what election?"

New York Police Department is aware of the emails and are "absolutely livid"  NYPD are watching over FBI and have threatened the FBI if they don't do something about these crimes they will take the responsibility of informing the public.  Revolt is brewing.

Conspiracy of Silence, a documentary listed for viewing in TV Guide Magazine was to be aired on the Discovery Channel, on May 3, 1994. This documentary exposed a network of religious leaders and Washington politicians who flew children to Washington D.C. for sex orgies. Many children suffered the indignity of wearing nothing but their underwear and a number displayed on a piece of cardboard hanging from their necks when being auctioned off to foreigners in Las Vegas, Nevada and Toronto, Canada. At the last minute before airing, unknown congressmen threatened the TV Cable industry with restrictive legislation if this documentary was aired. Almost immediately, the rights to the documentary were purchased by unknown persons who had ordered all copies destroyed. A copy of this videotape was furnished anonymously to former Nebraska state senator and attorney John De Camp who made it available to retired FBI Agent Ted L. Gunderson. While the video quality is not top grade, this tape is a blockbuster in what is revealed by the participants involved.
Posted by enerchi at 11/01/2016 01:50:00 PM

OUT OF MIND » THE INSANITY OF REALITY » GOVERNMENTS & THE NEW WORLD ORDER » BREAKING BOMBSHELL ! FBI NYPD INSIDERS LEAK - Email Scandal About To Take A SICK And TWISTED Turn

» BREAKING: Monica Lewinski Comes Out Of NOWHERE With The Bombshell Scandal Of The Century
» Bombshell accusation: Hillary never had a State Department email address; all emails were sent to her at her private unsecured email
» Crowd Gathers at US Supreme Court After Bombshell Leak Reveals Possible Roe v Wade Overturn
» Assange To CNN: You Have 48 Hours Until WikiLeaks Destroys You With Bombshell Leak
» Breaking: NYPD Just Raided Hillary's Property. What They Found Will Put Her & Bill In Prison.