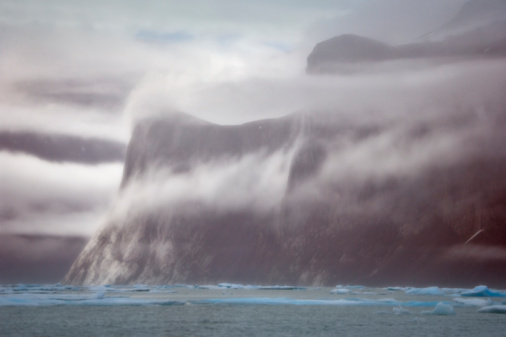 In the tiny Arctic hamlet of Igloolik, Nunavut, hunters say a mysterious sound, seemingly coming from the bottom of the sea, is driving wildlife away.
According to the CBC, locals have different theories about its source, and have attributed this “ping” or “hum” to a mining company that has operated nearby, or even to sabotage by Greenpeace. Both entities denied having anything to do with the phenomenon that hunters allege has made an area once teeming with wildlife a bit more barren over the course of the summer.
Although the Arctic has been increasingly opening up to mining operations, tourism, and military exercises, this pinging sound remains unexplained. Without anywhere else to turn, and with no leads on what’s causing it, the Office of the Premier of Nunavut called on the Department of National Defence (DND) to investigate in October. 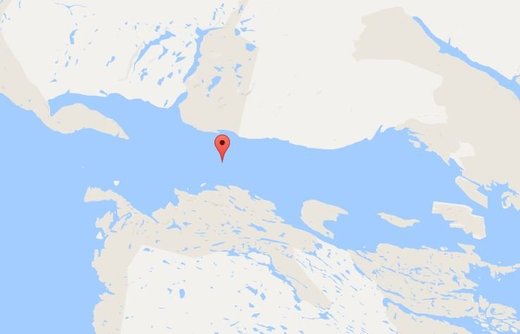 “The Department of National Defence has been informed of the strange noises emanating in the Fury and Hecla Straights area, and the Canadian Armed Forces are taking the appropriate steps to actively investigate the situation,” DND spokesperson Evan Koronewski wrote me in an email.
“We appreciate the information provided by the Government of Nunavut and will follow up with the Premier’s Office once the investigation has concluded,” he added.
Canada is apparently becoming the official Land of Extremely X-Files Sh!#, as this isn’t the first mysterious noise that locals have called upon the government to investigate. Citizens of Windsor, Ontario have long been plagued by what’s known as the “Windsor hum.”
In 2014, a public summary of an as-yet unpublished government report on that strange hum stated that its origin could not be established, but that it might be the result of industrial operations in the area.
It’s unclear whether DND’s investigation into the Arctic “ping” will be any more fruitful, but until some answers can be found, there’s going to be some pissed off hunters up in Igloolik. –MotherBoard

“Over the years, there have been various reports of sightings of mysterious objects in Canada’s Arctic waters. In the late 1990s and early 2000s, there were at least a dozen sightings of unusual objects moving along or just below the surface of the water, mostly around Baffin Island, according to Canadian Forces records.” – Nationalpost
Sources: MotherBoard, NationPost

Posted on November 4, 2016 by Sean Adl-Tabatabai

Canada are to deploy their military to the arctic to investigate a mysterious sound that appears to be coming from the sea floor.

According to locals, a strange humming noise has been heard throughout the summer, scaring nearly all the animals away in Fury and Hecla Strait.
Cbc.ca reports:
“That’s one of the major hunting areas in the summer and winter because it’s a polynya,” an area of open water surrounded by ice that’s abundant with sea mammals, he said.

“And this time around, this summer, there were hardly any. And this became a suspicious thing.”
The noise is “emanating from the sea floor,” according to remarks Quassa made last month in the Nunavut legislature.
Another area MLA, George Qulaut, said he visited the site after hearing the reports. Though he wasn’t able to hear the sound — he says years of hunting have left him nearly deaf, especially to high-pitched sounds — he did notice the lack of wildlife.

“That passage is a migratory route for bowhead whales, and also bearded seals and ringed seals. There would be so many in that particular area,” he told CBC News, recalling his own days of hunting there.
“This summer there was none.”
Boaters aboard a private yacht passing through the area also say they heard the mysterious sound, and described it during an appearance on a community radio show upon their arrival in Igloolik. A number of people called in to say they’d also heard it.
The noise can apparently be heard through the hulls of boats. CBC News has not heard the noise and did not speak to anyone who claims to have heard it.
Theories abound
Nobody seems to know where the sound comes from, but theories — from environmental activists to mining — abound.
One theory blames Baffinland Iron Mines Corporation. The company has previously conducted sonar surveys of nearby Steensby Inlet in conjunction with its Mary River mine southwest of Pond Inlet. But the company told CBC News it is not conducting any surveys in the area, and has no equipment in the water.
Quassa says no territorial permits have been issued for work — such as construction, blasting or hydrography — in the area that could explain the noise.
He also says some of his constituents suspect the sound is being generated on purpose by Greenpeace to scare wildlife away from the rich hunting ground. The organization has a tense past with Inuit stemming from its opposition to the seal hunt in the 1970s and 1980s.
“We’ve heard in the past of groups like Greenpeace putting in some kinds of sonars in the seabed to get the sea mammals out of the way so Inuit won’t be able to hunt them,” Quassa said.
These rumours, though persistent, have never been substantiated.
“Nobody has ever seen any type of ship or anything going through that area and putting something down,” Quassa said.
Greenpeace denies the assertion.
“Not only would we not do anything to harm marine life, but we very much respect the right of Inuit to hunt and would definitely not want to impact that in any way,” Farrah Khan, a spokeswoman for the organization, said from Toronto.
Military investigating
The military is also aware of the noise, and says it is looking into it.
Internal correspondence between sources in the Department of National Defence, obtained by CBC News, suggest submarines were not immediately ruled out, but were also not considered a likely cause.
A spokesperson told CBC News the armed forces are investigating.
“The Department of National Defence has been informed of the strange noises emanating in the Fury and Hecla Strait area, and the Canadian Armed Forces are taking the appropriate steps to actively investigate the situation,” a spokesperson wrote in a statement.
Igloolik is about 70 kilometres north of Hall Beach, an active military site that was once part of the now-defunct DEW line of radar stations.
In the meantime, Qulaut is worried about the sound’s impact on game animals that have feeding in the area for centuries. For now, the community has no answers about the sound, its origins, or what it might be doing to the animals.
“As of today, we’re still working on it,”  he said.
“We don’t have a single clue.”

» Canadian City Has Been Plagued by a Mysterious Noise for Over Eight Years, and Nobody Knows What’s Causing It
» THE FREEMASON'S OBSESSION WITH THE POLES AND FREDERICK COOK'S MYSTERIOUS ARCTIC MISSION...
» Mysterious Deaths of Canadian Billionaire Drug Maker & Wife – What Did They Know?
» Arctic Melting Faster Than Thought! Melting Arctic Is Covering Itself in a Warm Layer of Clouds
» Cloud UFO Moves Through Parking Lot In Virginia Scaring The Heck Out Of Eyewitnesses lol