MOMS Across America Stand With Indigenous People At Standing Rock

MOMS Across America Stand With Indigenous People At Standing Rock Fri Nov 04, 2016 11:21 am

MOMS Across America Stand With Indigenous People At Standing Rock

Posted on November 3, 2016 by Doreen Agostino

Protect Our Water
Standing Rock North Dakota is one of the most significant events of our time. Brave Indigenous people and supporters have chosen to stand in the way of bulldozers and pray to protect their water. All they want to do is protect their only source of water from having a pipeline of oil contaminate their water and from having sacred burial lands desecrated. 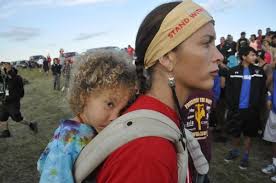 Any mother of any race can relate to this. All we want is clean water, clean, healthy food, a safe home, and to be respected in our society. We want corporations to Stop Poisoning Our Children!
Instead of protecting them, the governor of North Dakota has sent tax payer funded police to intimidate them, spray them without warning, with mace, and shoot them with rubber bullets. Flood lights surround their camp, glaring all night long and snipers sit on hill sides. Over 400 people have been arrested thus far, many in jails around the state unbeknownst to the tribes. Keep in mind these actions are happening on Sioux Nation land which is protected by treaty or on land which they have permission to be on, peacefully. None of the water protectors are being violent, and yet they are being harmed and arrested.
The Missouri River which will very likely be contaminated with oil if the pipeline is allowed to go through it, brings water to 27 million people directly down stream, maybe to you! People all along the river and beyond will be impacted. Standing Rock supporters report that there were over 200 oil spills in North Dakota in a month recently, it is not a matter of if the pipeline will break, it is a matter of when. We can no longer afford to let corporations make risky decisions for us and control our water and food supplies, poisoning all of us. This injustice needs to be stopped! 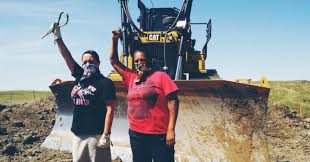 We urge you to take action today. Standing Rock needs boots on the ground. They need support there, in person. It will take some extraordinary planning, some resources and yes, time off work and child care support. But this is extremely important. If we have thousands of people there, we can make a difference.
If you want to donate to support Standing Rock we are planning on going to Standing Rock ASAP and bringing supplies such as firewood, things for warmth, supplies for medics and organic food. If for any reason it turns out we cannot go, absolutely 100% of the resources gathered from this page for Standing Rock will go to their legal aid fund and supplies. Please donate below.
If you buy supplies please see this update below on what is needed:
Standing Rock Update 11/2/2016: Via Daphne Singingtree
Today, hundreds of water protectors met militarized police to defend sacred burial grounds and the approaching construction of the Dakota Access Pipeline. Youth, elders, and people of all walks of life stood on the riverbank in prayer, and many boated or walked into the river, to stand strong in protection. Rubber bullets were shot by Morton County Sheriffs point blank at such close range as to cause one young man to cough up blood. Tear gas and pepper spray were unleashed on the protectors en masse.
The amazing physicians and medics we work with in the Standing Rock Medic & Healer Council have been inundated with literally hundreds of injuries, triage overflowing. Notice the tree at the top of the hill where armored vehicles are staged. That is the grave site of Alma Parkin and Matilda Galpin, the indigenous women who once owned the Cannonball Ranch, where DAPL is actively digging its pipeline ever closer to the Missouri River. Police are desecrating grave sites, brutalizing peaceful people in prayer, and making a mockery out of law enforcement in this country.
The needs of the indigenous resistance movement here on the prairie are great. Come stand with us.
Make phone calls. 202-456-111 for the White House.
Call the people who have sent the police to Standing Rock, click here for numbers.
Send supplies. And if you can, offer financial support to replenish the stock of Milk of Magnesia used to treat the burns from tear gas, Arnica to treat the blunt force trauma, Rescue Remedy to treat the emotional shock, and to support the volunteer practitioners on the ground who are tending to the physical and emotional health of these protectors in such a loving and compassionate way . . . not to mention, gathering resources to winterize the camp for the impending -40 degree weather coming in just a few short weeks. Winterized tents, subzero sleeping bags, firewood, and supplies for medics are need urgently.
If you share this post, please copy and paste these needs, so they can reach the widest audience, as Facebook and other social media outlets are actively blocking the posts of Standing Rock supporters right now.
Oh, and someone please send a semi truck of rose glycerine and chocolate bars, will ya? These medics need some extra love right now.
-Daphne
Notice how the original pipeline route (dashed line) was re-routed from a white suburban neighborhood into Sioux nation territory and sacred burial lands (solid line), another example of social injustice and greed by corporations sanctioned by our government. All for oil to go to China, not be used in the USA. We are better than this. There are SAFE alternatives to oil! 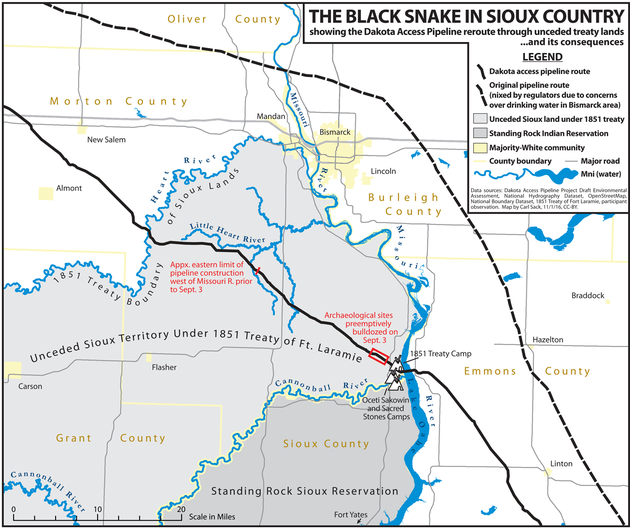 At long last, significant attention is being drawn to the corporate and political practices being used to force the Keystone and Keystone XL pipelines on the people of North America. Protests at the Standing Rock Sioux Indian Reservation in North Dakota are being put down by a brutal militarized police force working in service of private corporations, banks, and investors, and the world has been able to watch live streams of the events on social media.
While it is both inspiring and heart-breaking to see what happens when water people peacefully resist the oppression of the corporate state, much of the attention, deservedly so, is on the struggle of the Sioux and their interests in protecting their sacred ancestral lands, their treaty rights to reservation land, and the protection of their water supplies.
What is going under-reported, however, is the fact that the Keystone pipelines jeopardize the land and water rights of millions of people in North America, and that for years this project has been met with resistance by property owners, activists and even celebrities. The struggle we see now at Standing Rock is but another in action in a growing legacy of fighting this project. READ more at
http://www.wakingtimes.com/2016/11/03/standing-rock-legacy-resistance-keystone-pipeline/?utm_source=Waking+Times+Newsletter&utm_medium=email&utm_campaign=1cdcb62df5-RSS_EMAIL_CAMPAIGN&utm_term=0_25f1e048c1-1cdcb62df5-46484861