London Citizens Rise Up As Thousands Protest Against The Ruling Elite

London Citizens Rise Up As Thousands Protest Against The Ruling Elite Sun Nov 06, 2016 10:18 am

London Citizens Rise Up As Thousands Protest Against The Ruling Elite 2000 armed police were deployed to Trafalgar Square in central London for a face-off between the Million Mask March protestors who are rising up against political corruption, austerity measures and the decays of civil liberties.

Wearing characteristic Guy Fawkes masks, supporters of hacking collective Anonymous crowded into Trafalgar Square with scores of police on hand to keep order. The protest passed off without major incident, though by 10.45pm police had made 47 arrests, the majority for drug offences and obstruction of officers.

Ugly scenes marred last year’s march, which saw four officers injured by missiles and fireworks that were thrown at them.

Scotland Yard imposed restrictions on this year’s event amid concerns over any repeat of the disorder, limiting the march to three hours between 6pm and 9pm on a route between Trafalgar Square and Whitehall. 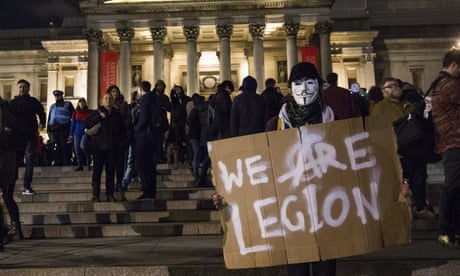 Nearly 20,000 people had indicated they would attend on the event’s Facebook page, which warned, “the police are not your friends”.

The protest began peacefully, with several participants climbing the base of Nelson’s column and chanting the slogan “one solution, revolution”. The procession headed along Whitehall and there were angry scenes as police formed a ring of steel outside parliament. 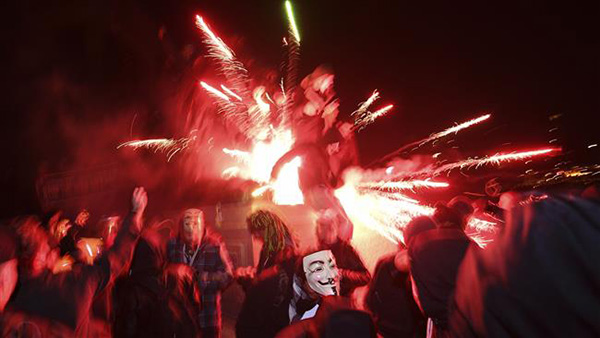 
Officers stood firm, telling protesters to stay within the boundaries. Several supporters, masked and otherwise, argued they should be free to pass on public roads. Fireworks and flares were lit in front of Westminster Abbey.

Among the protesters was Angela Windsor, an unemployed 40-year-old, who said she had travelled from Wales to take part in the event. “Nobody is protecting people – nobody cares. I think everyone here cares enough about people to make the effort to come down and try and do something because the officials aren’t doing it.”

She said anyone who tried to incite a repeat of last year’s violent displays would be missing the point, adding: “Nobody wants a fight, we just want change.” But she was forced to defend the wording of a sign she was brandishing – including the words “death to the monarchy” – when questioned about it by passersby. 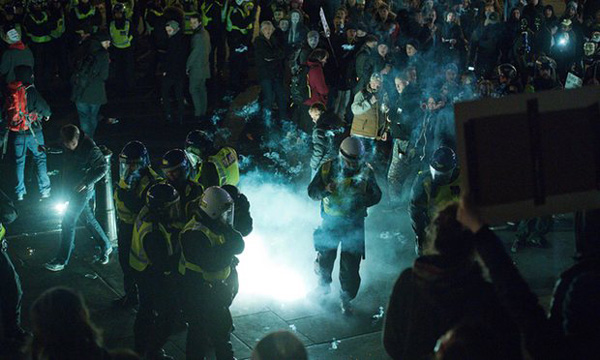 © Press
Dozens of protesters were arrested by armed police
Another protester, a London-based mental health worker who gave his name as Jay, stood out from the crowd dressed as Santa and bearing a sign offering “free hugs”. The 30-year-old said he chose to dress as Father Christmas to show “not all of us are down here for violence … I’m the only Santa who doesn’t give out presents because it is all capitalism. I give out free hugs, which I think is much better than a £300 present.”

The protest in Parliament Square had dwindled to several hundred people by around 7.30pm, when one man was seen being led away by officers. Another climbed the memorial to Field Marshal Haig and shouted, “this is for all of us”.

Shortly before 9pm, as the end of the march approached, there were chaotic scenes as riot police moved in to make an arrest.

A group of protesters surrounded and charged the officers, with shouts of “fuck the police” and “police brutality”. Several glass bottles were thrown as police escorted a protester away.

» Thousands Of Citizens To Protest Elite Pedophile Ring Outside The White House
» Hundreds of Thousands Take to the Streets in London to Protest And Fight for Their Children
» London Calling... THOUSANDS of Anti-Lockdown Protesters Take Over London
» UPDATE: STILL NO MEDIA COVERAGE OF HUGE PROTEST [VIDEO] THOUSANDS TAKE TO STREETS IN NYC TO PROTEST OBAMA'S DANGEROUS IRAN DEAL » 100percentfedUp.com
» 9/11 – Ruling Elite’s Skeleton in the Closet