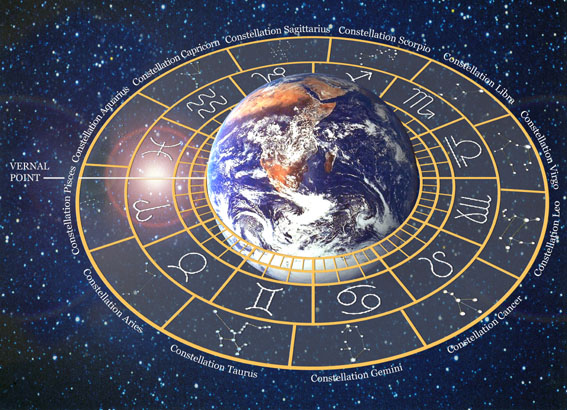 I present a way of looking at “the Age of Pisces” from a different perspective.  The Sun goes through all 12 signs of the zodiac annually and the zodiac also changes signs approximately every two thousand years and is called the precession of the equinox.
So on the winter solstice, December 21, 2012, the end of the world isn’t coming; it is simply the end of an Age – the Age of Pisces – followed by the Age of Aquarius.  At the present time we are going through a transitional change.
Approximately 4,000 years ago, Moses ushered in the Age of Aries when they worshiped the ram/lamb. The previous 2,000 years was the Age of Taurus when they worshiped a bull/calf called Apis. Deuteronomy 9:21 relates that Moses took the golden calf (symbol of Taurus) “ground it into dust and threw it into the torrent that flowed down the mountain” thus ending the Age of Taurus and the beginning of the Age of Aries, where they began sacrificing the ram/lamb.
Christianity entered the scene at the beginning of the Pisces Age 2,000 years ago and the symbol for Pisces is the fish, as well as for Christianity. You see it on bumper stickers everywhere – Christians put the fish symbol on the bumper of their cars. Scripture speaks of fishermen along with the practice of eating fish on Friday.
The Age of Pisces could be called the “Age of Deception”. Some of the keywords symbolizing Pisces are: deception, illusion, hidden, misled, confusion, fraudulent schemes, fantasy world, secrets,  false, fake, mysteries, drugs/alcohol and on the positive side, kind, intuitive, and gentle. It rules the arts and humanities. You can see the “deception” and “illusion” in every aspect of your life; appearance, finances, communication, your home, entertainment, health, the foods you consume, drugs, government, and religion.
If you really look at the world you live in at the present time you will see the signs of Pisces everywhere and in every aspect of your life. Entertainment such as Disney World and Disney Land would certainly be classified as “fantasy worlds“. Most folks know that the “Reality Shows” and The Wide World of Wrestling are totally “fake“. Virtual reality games are another “illusionary” form of entertainment.
Pisces symbolizes “illusion“. Look at the appearance of models and actors. They use make-up artists, Botox, plastic surgery, anti-aging serum, implants and fake tans. If that’s not enough, they Photoshop the photos of these models and actors.  This simply gives the “illusion” of physical perfection.
The Federal Reserve is a privately owned central bank disguised as a government owned system. Which is no more “federal” than FedEx. Even their name is “deceptive“, giving the “illusion” of being part of the federal government, which in fact, it is not.
Communication and knowledge are other mediums that are “illusive” and “deceptive“.  Pisces Age people tend to be easily “misled” because they want to believe what they see/hear on television or read in the newspaper, believe what the church and government tells them, or believe whatever is popular at the time. Back in history in the 1500′s, many educated people believed that the world was round, but it was not until the 1800′s that that knowledge became widespread. Yet much earlier in history, they believed the world was a sphere. Isaiah 40:22 says “he sits enthroned above the circle of the earth“. This world did not become round only at the point where it becomes acceptable to say it was round. It was always round. Truth does not become truth only when it becomes acceptable.  Much of our ancient history has been destroyed, with the burning of ancient scrolls, the burning of the Library at Alexandria and other libraries. Much of our history is “hidden” in the archives of the Vatican and in the basement of museums, and in monastery libraries. Shamans in indigenous tribes who orally passed their ancient knowledge to their tribes have been killed.  Governments also withhold or keep “hidden” information from the masses, calling it “classified” or top “secret“.  There are many “secret societies” and mystery schools.
Even owning your own home is “deceptive“. You finance with a bank but it has the right to foreclose on your house and take it if you get behind on your payment. Although you have the “illusion” of owning your house, the bank really owns it until it is completely paid for, but you must pay the property taxes on the house. Why isn’t the bank paying the taxes on the house since they own it?  Another “illusion” and “fraudulent scheme“.
You are even being “misled” regarding the food you eat, the water you drink, and the air you breathe. Genetically modified (GM) foods are being sold to you as if they are better than food from Mother Nature.  A NYT article written by Roger Cohen declares that people who buy organic foods are delusional “cult followers” living a fable. If they think GMO foods are better, why don’t they label it like organic food is labeled?