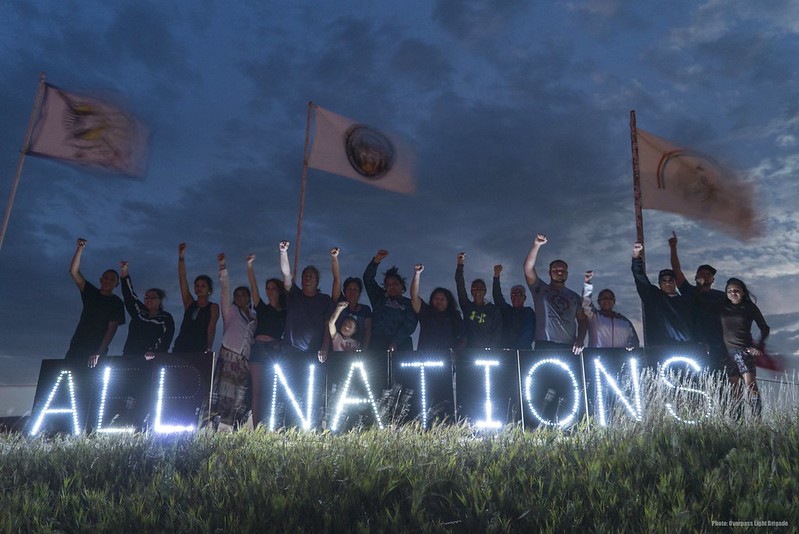 By Nathan Wellman
Greenpeace just released a press release revealing that DNB – the largest bank in Norway – just sold all of its assets in the Dakota Access pipeline.
“The news follows the delivery of 120,000 signatures from Greenpeace Norway and others to DNB urging the bank and other financial institutions to pull finances for the project,” the press release said.
DNB has also said recently that it is considering backing out of its loan to DAPL, which adds up to around 10% of its funding.

“It is great that DNB has sold its assets in the disputed pipeline, and it is a clear signal that it is important that people speak out when injustice is committed,” said Greenpeace Norway Sustainable Finance Campaigner Martin Norman. “We now expect DNB to also terminate its loans for the project immediately.”
Greenpeace USA spokesperson Lilian Molina said that this will likely be a crushing blow for the controversial pipeline.
“The writing’s on the wall for the Dakota Access pipeline,” Molina said. “People power is winning. The news that DNB has sold its assets and is considering terminating its loans is a victory for the water protectors who are fighting to stop this disaster of a project. All financial institutions with a stake in the pipeline must quickly realize that financing this project is toxic.
“It would be smart for them to get out ahead of the growing movement of customers looking to divest from banks that finance the destruction of our planet and ignore Indigenous rights and sovereignty. Citigroup, TD Securities, Wells Fargo, SunTrust, and the other banks backing this project should see this as a sign to get on the right side of history.”
The White House petition to stop construction of the DAPL pipeline currently stands at 378,000 signatures. In response, the Justice Dept has recently announced that they are inviting “[R]epresentatives from all 567 federally recognized tribes to participate in formal, government-to-government consultations on how federal decision-making on infrastructure projects can better allow for timely and meaningful tribal input.”
Source: USUncut
Featured Image

I am planning to do something about Wells Fargo and expose them through a sting operation soon!

» DAPL Protesters Proven Right As Largest Gas Pipeline In U.S. Experiences Massive And Deadly Explosion
» Lockdown at TD Bank in Massachusetts to Defund DAPL
» More Bloggers Sounding The Alarms: Withdraw Your Assets From Your Bank
» Russia’s largest bank opens blockchain lab
» The united States of America has been foreclosed on, the assets have been seized and are back in control of the people!