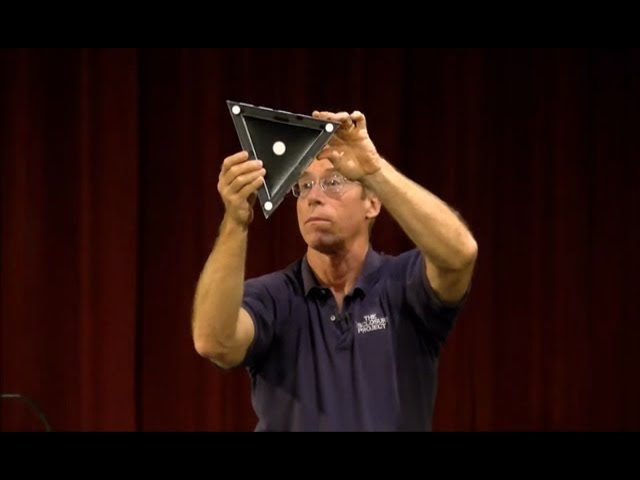 DISCLAIMER: Reader discretion advised. The above posts are entirely fictional, for entertainment purposes only. Any similarities to real life events, animals, humans, persons, politicians, or any other form of organization entity living, dead or in any other state of existence are coincidental. Any opinion, comment or statements related or attributed to this username are not necessarily nor implied to be those held by the ip/computer/username or other electronic media device or service owner/user.

Posts : 73
Join date : 2016-09-01
Is there a clandestine space program
designed to save the elite
from a global catastrophe?

In 1977, Anglia TV in the UK broadcast an edition of its popular Science Report strand that uncovered a story so colossal it would change the world.

The episode was titled Alternative 3 and began with an investigation into a string of mysterious disappearances amongst top scientists. What followed was sensational.

The scientists, the show discovered, had been recruited into a top secret clandestine space program, designed to build a base on Mars in anticipation of a forthcoming ecological catastrophe on Earth.

Anglia TV was immediately bombarded with calls from alarmed viewers. The alarm was unwarranted they were told because, like Orson Welles' [url=http://www.bibliotecapleyades.net/ciencia/ciencia_flyingobjects129.htm#Orson Welles - Radio Broadcast 1938]War of the Worlds[/url] in 1938, Alternative 3 was a hoax.

Produced in a documentary style, and originally intended to be broadcast on April 1st, the program was a skillful fiction written by award-winning screenwriter David Ambrose. 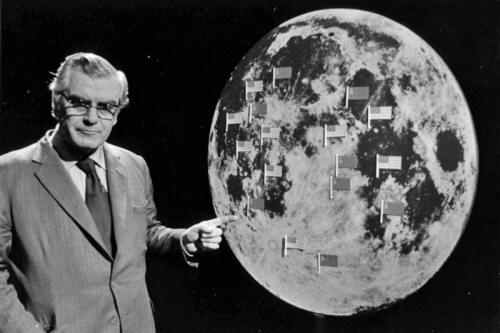 Alternative 3
proposed the Americans and Russians
had secretly built a base on the Moon
Although relatively obscure, Alternative 3 has had a lasting and deep impact since it was first broadcast in 1977. Many now believe the fictional events portrayed in the show reflect reality.

It has inspired hundreds of conspiracy theories about secret space missions, bases on the Moon and Mars and even off-world fleets of advanced spacecraft.
The fictional Alternative 3 culminates with the reporter decoding a video tape which reveals footage of a joint US/USSR mission to Mars in 1962.

In 2001, British hacker Gary McKinnon claimed to have found astonishing evidence that such an out of this world program really does exist.

Is there a secret space program?

As far as the general public are concerned, the American space program is run by NASA  -  the National Aeronautics and Space Administration.

Signed into existence by Dwight D Eisenhower in 1958, NASA was primarily a civilian organization built upon earlier military space programs. It's many high profile projects like,

...were subject to much publicity and public scrutiny.

Despite this, the US Air Force continued to operate an almost entirely unknown, vast and clandestine parallel space program even after the formation of NASA. 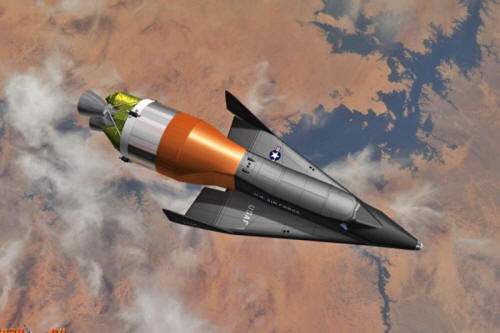 USAF's Dyna-soar space plane
This program rivaled, if not exceeded, the ambition of Apollo and the Space Shuttle.
It operated under almost total secrecy, its scale, scope, and objectives were obscure and only the occasional low-key press release hinted at its existence at all.

The USAF has long since run black projects that were so secret the public, and sometimes even congress, were completely unaware of their existence.

Various aircraft, such as the F-117A Nighthawk, were financed, developed, built and operated under total secrecy. The Nighthawk's existence wasn't revealed publicly until 1988, some 11 years after its first flight. 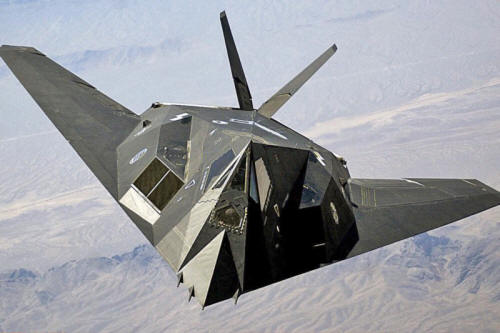 The F-117 was a total secret
for over a decade
Could they have similar top secret space projects that remain entirely unknown to the public?
A look at those plans that were acknowledged reveals a curious pattern.

It doesn't seem credible that the USAF would spend so many hundreds of billions of dollars on multiple manned space programs and then quietly mothball them all with no results. 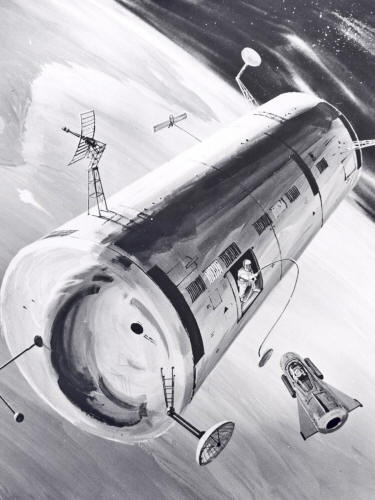 MOL was the USAF's ambitious plan
for a space station

If so, these programs would have been far more advanced than anything NASA publically achieved and move the prospect of the kind of secret space program envisaged in Alternative 3 closer to fact than fiction.

A curious diary entry by president Ronald Reagan in 1985 suggests such a possibility may not be so far-fetched. In the diaries, published long after his presidency, Reagan recounts a meeting at the White House with several top space scientists.

"It was fascinating. Space truly is the last frontier and some of the developments there in astronomy etc. are like science fiction, except they are real. I learned that our shuttle capacity is such that we could orbit 300 people".

Presuming Reagan wasn't simply confused or mistaken, this claim is impossible without the prospect of a secret space program.

America's space shuttle has a capacity of 8 people, and only 5 were ever built. The U.S. does not, and never has had, at least officially, the technology to put 300 people into space.

The science fiction reference seemed apt.
However, in 2001, a computer hacker from the UK found evidence that cast this obscure entry in Reagan's diary in a sensational new light.

Evidence for 'The Hacker'

In 2002, Scottish computer enthusiast Gary McKinnon was accused by the US government of the,

"the biggest military computer hack of all time".

Under the guise of 'Solo', McKinnon hacked into dozens of Pentagon, USAF, and NASA computers between 2001 and 2002.

US prosecutors sought his extradition and charged him with 7 counts of computer-related crime which could have seen McKinnon receive a 70-year prison sentence. 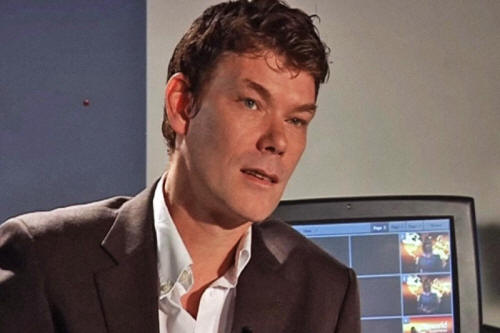 Gary McKinnon
claimed to have found evidence
for a secret space program
His roll call of alleged crimes was impressive:

McKinnon himself maintains his actions were not malicious and he was merely searching for evidence of UFOs and suppressed free energy technology.
If he can be believed, what he found was incredible.

The first find was spreadsheet detailing a list of USAF officers, with their names and ranks. What was interesting about this was the file was titled,

Based on what else he found, McKinnon does not think this is a reference to aliens, but human officers serving in space.

Also in the file was information about ship-to-ship transfers. What made this file doubly strange was none of the ship names, or indeed officers, seemed to exist.

McKinnon was aware of the case of Donna Hare, an ex-NASA employee who said the agency had a department in building 8 at the Johnson Space Centre whose job was to airbrush UFOs out of space images.

McKinnon found an unguarded computer at building 8 and looked for evidence to corroborate Hare's story. Incredibly, he says he found it. There were a series of folders on the computer labeled 'raw' and 'processed'.
Inside the raw folder, he found an image of large, silvery, cigar-shaped craft pictured in orbit over the northern hemisphere. 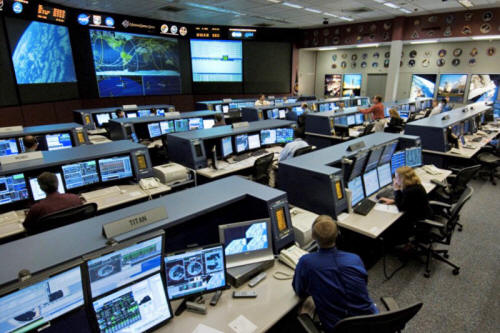 McKinnon hacked into NASA computers
at the Johnson Space Center
Could this be a spacecraft developed by a secret space program of the kind proposed in Alternative 3?

Critics of Gary McKinnon's case question why he didn't download or screen capture any of these images. The hacker himself also admits he was often high on marijuana and drunk when he hacked the computers.

Caveats aside, McKinnnon had provided some tantalizing evidence in support for a secret space program. But it was still weak.

Was there anyone else to corroborate his claims?

Some ex-employees of NASA, the military, and its defense contractors have come forward in recent years with evidence that supports the secret space program theory.

Whilst some of these whistleblowers tell stories so bizarre and incredible they have to be discounted, others are more credible.

In 1965, Sgt Karl Wolfe was a young electronics expert at USAF tactical air command at Langley in Virginia. One day he was called over to an NSA facility to examine a fault in some photographic equipment.
The lab was processing images of the moon's surface taken by the lunar orbiter.

One thing immediately struck Wolfe. There were hundreds of scientists from all over he world at the facility, speaking dozens of different languages. Wolfe felt this peculiar, especially at the height of the cold war.

He got talking with a photographic technician processing the lunar orbiter images.
The man appeared disturbed.