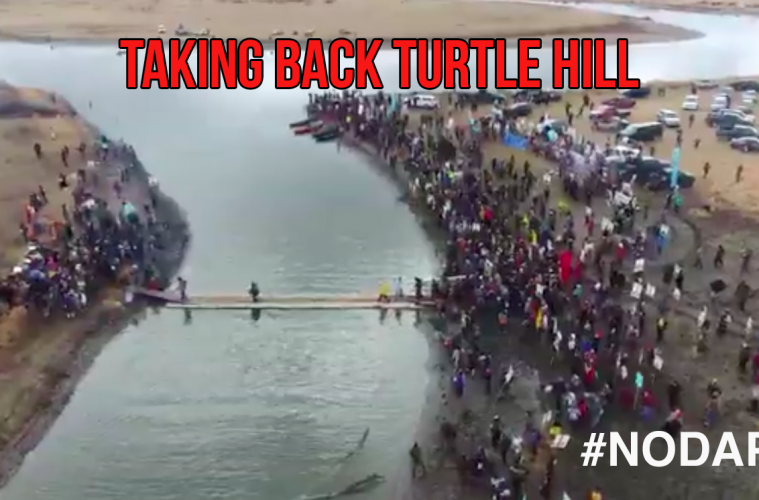 On Thanksgiving day water protectors in Standing Rock decided to make their move to take Turtle Hill. Reports coming from just outside of the action states the police were not expecting this move nor were they prepared for it. They are quite out outnumbered in this occasion.

The hill currently lies on land that is now owned by the US Army Corps of Engineers, but belonged to the Natives as it was once a Native American burial ground and still remains a spiritual location for them.

Water protectors built a makeshift bridge to protect the sacred hill that is currently being occupied by security and law enforcement in North Dakota.

READ MORE: A HARSH REMINDER OF WHAT REALLY HAPPENED TO NATIVE AMERICANS AS WE STAND WITH STANDING ROCK

Turtle Island hill has been the scene of various actions that took place between police and water protectors. Although it had been some time, today marked an important day for water protectors to attempt to take it back as it was Thanksgiving. This could be seen as a sensitive time for anyone who understands what really went on when it comes to this holiday.

Indigenous Rising Media was flying a drone to get amazing coverage of the action on Turtle Hill today. You can watch as police scramble, protectors take foot hold over the hill and more.

The video shows protectors making their way across the water on a bridge they made and deployed. The top of Turtle Hill is held by police from Morton County Sheriff’s Department and private security.

As tensions rose earlier this week on The Backwater bridge, clashes took place between water protectors and police. The water protectors claim they were entirely peaceful and numerous video footage online seems to show that. However, the Morton County Sheriff’s Department is accusing some protectors of rigging propane canisters to explode on Backwater Bridge.
They made this post on social media. Is the accusation real? No one knows. Why it’s important to question it is because there is a very strict no weapon policy amongst the protectors and even when our team of journalists were out there on the front lines at Standing Rock, it was clear there were no weapons at all. Perhaps thats changed.