OUT OF MIND » THE INSANITY OF REALITY » POISON PLANET » Critical environmental collapse: Hundreds of millions of trees are dying in North America

Critical environmental collapse: Hundreds of millions of trees are dying in North America

Critical environmental collapse: Hundreds of millions of trees are dying in North America Fri Dec 02, 2016 10:40 am 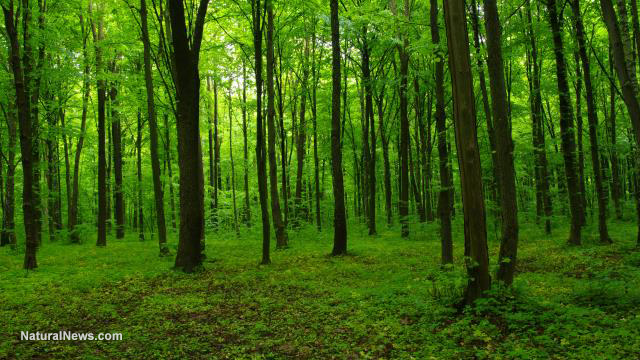 (NaturalNews) In addition to the mass death of bees throughout the United States, there is another potentially life-ending death epidemic occurring as well: the death of millions of oxygen-producing trees.

As noted by the U.S. Department of Agriculture, U.S. Forest Service officials have documented and identified an additional 36 million dead trees across the state of California since their last aerial survey taken in May. The additional trees bring the total number of dead trees since 2010 to more than 102 million, on 7.7 million acres of the state's drought-stricken forest land.

This year alone, USDA and the Forest Service noted, 62 million trees have died, which is a 100 percent increase in dead trees across the state over the previous year. And what's more, millions of additional trees are in a weakened state and are expected to die out in the coming months and years.

The loss of this vital resource isn't just happening in California. It's also happening near Fukushima, Japan, site of the worst nuclear disaster since the mid-1980s; it's happening as fires rage through forest land in Indonesia; and it's happening throughout North America, the Waking Times reported.

Recently, a study published in the journal Nature, estimated that the planet has 3.04 trillion trees. The research further noted that 15.3 billion trees are cut down annually, and that 46 percent of the world's trees have been cleared over the past 12,000 years.

So clearly, a renewable resource is fast becoming non-renewable.

"Trees are among the most prominent and critical organisms on Earth, yet we are only recently beginning to comprehend their global extent and distribution," said Thomas Crowther of the Netherlands Institute of Ecology, who conducted the research using satellite data and computer modeling.

The Waking Times noted further that the tree deaths in Northern California have been linked to Sudden Oak Death, in addition to the ongoing drought.

Elsewhere in the U.S., trees are becoming more scarce as well. For instance, in 2010, Hawaii's healthy ohi'a trees began to die off on the Big Island because of what is now referred to as ohi'a disease. Scientists still do not understand its origins, and as such do not yet know how to treat or prevent it.

Entire regions and mountainsides are losing trees, and in very short order. And while commercial logging operations include the replanting of harvested forests, trees take many years to mature. Also, some have speculated that the tree death is due to a confluence of issues – a sign that rugged trees, more hearty than any other plants, are in a generally weakened condition due to constant assault from pollution and even climate engineering projects.

Never too late to preserve what is left

As reported by the Christian-Science Monitor, today there are basically only two big forests left on the planet, according to research funded by the Natural Science Foundation. These are located in South America and Africa; the rest are isolated.

"'There are really only two big patches of intact forest left on Earth — the Amazon and the Congo — and they shine out like eyes from the center of the map,' lead author Nick Haddad, a professor at North Carolina State University, told the New Yorker."

The fragmentation takes a major toll on wildlife and other living things. Researchers said that they found that fragmented habitats, on average, lose half their plant and animal species within 20 years.

Researchers noted that one way to reverse the fragmentation is to engage in a program to create corridors of trees, thereby connecting fragmented forestland.

"It's never too late to preserve what we already have," said Doug Levey, program officer with the National Science Foundation, and co-author of the paper.

Thanks to a very special person for the forward.

Thanks also to: http://www.naturalnews.com

OUT OF MIND » THE INSANITY OF REALITY » POISON PLANET » Critical environmental collapse: Hundreds of millions of trees are dying in North America